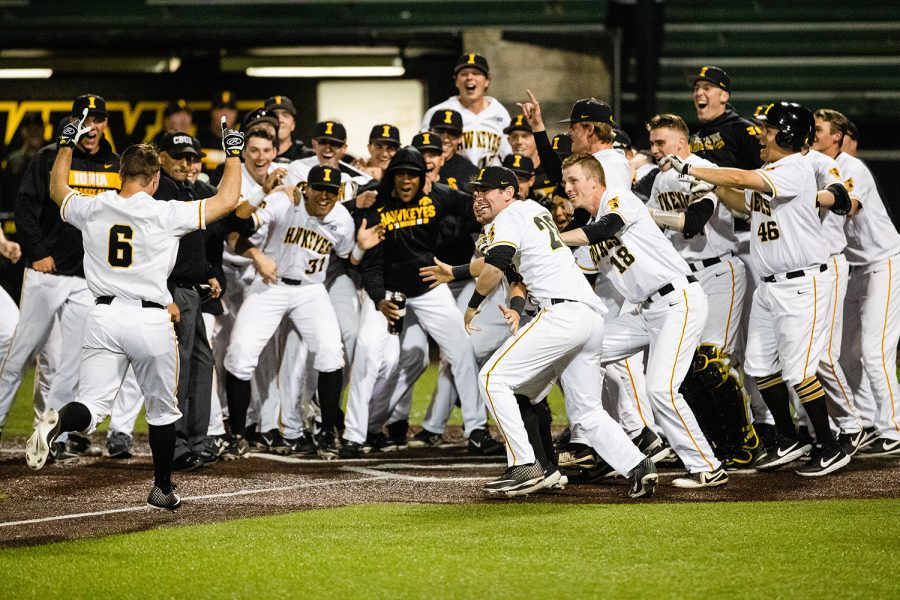 Iowa outfielder Justin Jenkins bunts during the baseball game against Milwaukee at Duane BanksField on Tuesday, April 23, 2019. The Hawkeyes defeated the Panthers 5-4.

Justin Jenkins entered Tuesday’s game against Milwaukee with 1 home run in his career.

But with the game against the Panthers tied 4-4 in the bottom of the 12th inning, Jenkins upped that mark to 2, crushing a no-doubt bomb over the right-field fence to send the Hawkeyes home with a 5-4 victory.

THAT JUST [email protected]_Jenkins6 IS THE HERO!

“I’m speechless,” Jenkins said. “I mean, heart rate is still coming down. It’s an unbelievable feeling. You can’t reproduce this in any way.”

In his three-year Hawkeye career, Jenkins has never been known for his power. Just ask his head coach.

“I’m not going to lie to you, I was not [expecting a Jenkins home run],” Heller said. “But I’m glad he did. He had a great swing. He hadn’t had many good swings tonight in his time in the game, and the one before that was not the greatest, either. And then, that was perfect.”

The walk-off would not have been possible if it wasn’t for his own defense, though.

With a runner on third and only one out in the top of the 12th, Milwaukee’s Jack Thelen hit a shallow fly ball to center field, where Jenkins was playing. Instead of allowing the Panthers to take a 5-4 lead, Jenkins gunned the runner at home for the double play, setting himself up to be the hero.

“I saw the ball in the air, two outs; it’s kind of one of those ride or die situations,” Jenkins said. “Ball was shallow enough, so I know they were going to send him. At the same time, I could get my weight behind it. I caught it, went through my crow hop like we train and just tried to deliver the most accurate throw I could.”

From the start of the game, it seemed as if the Panthers could be too tough of a test for Iowa to pass. Coming off a series win over Nebraska, the Hawkeyes allowed 3 runs in the first two innings. Iowa’s offense backed it up, however, scoring 2 of its own in the same span.

After scoring 1 more in the seventh, the Hawkeyes took it to extras, where Milwaukee would take the lead on a Devin Rybacki RBI single to left in the 11th. Iowa countered once again, though, with an Austin Martin RBI single through the left side.

That run would set the Hawkeyes up for success in the final inning, where Jenkins saved the game with heroics in the field and at the plate.

“Long day – 10th, 11th inning, we’re dragging a little bit, defense kind of goes downhill a little bit,” third baseman Brendan Sher said. “But this group of guys really stuck to it. We got guys on base, guys came through.”

Although it seemed unlikely at times, Banks Magic continued for one more game; Iowa now boasts a 15-4 record when playing at home.

But a home victory after trailing isn’t very surprising for the Hawkeyes. Not as surprising as a walk-off shot from a speed guy, that is.