With the Drake Relays rapidly approaching, Iowa has impressive numbers on its resume. 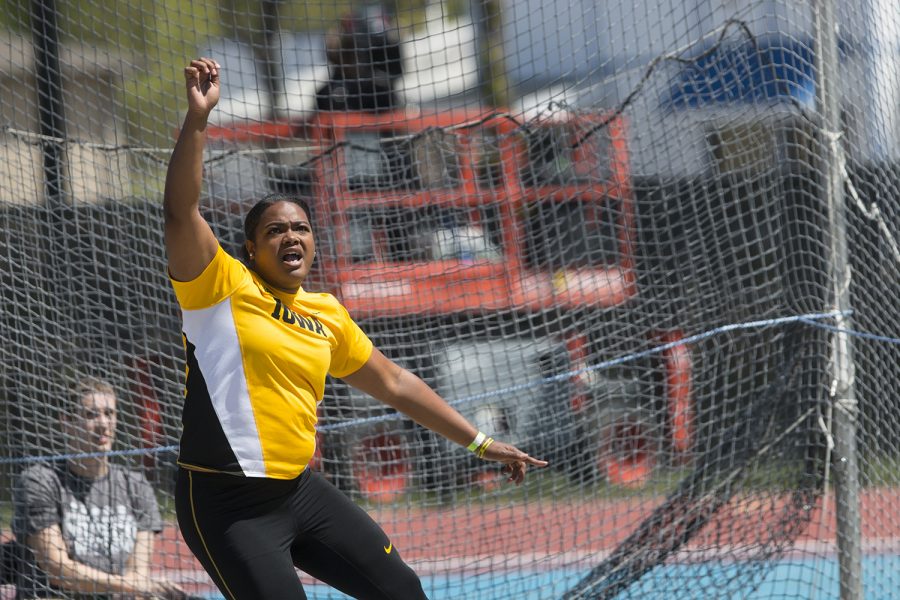 Iowa's Laulauga Tausaga watches her throw during the 18th annual Musco Twilight at Francis X. Cretzmeyer Track on Saturday, April 22, 2017. Iowa's men and women's track and field finished first overall in the Musco Twilight with a 237.5 and 203 respectively.

Iowa track and field is into the heart of its outdoor schedule at this point. After traveling to Arizona, California, and Florida so far, the team has the opportunity to compete in the state for just the second time.

The Hawkeyes will take the track at Drake Stadium for the Drake Relays from Thursday through Saturday in one of the state’s biggest sporting events of the year.

Heading into the event, Iowa is on a hot stretch of breaking records and putting up competitive marks. As the team looks to continue that, some numbers give an idea how Iowa stacks up heading into the Drake Relays.

On the women’s side, Tausaga ranks second in the country in the event (62.28 meters). Spanoudakis comes in just behind her, in fifth place (57.95).

Tausaga achieved her mark in her most recent outing, at the Beach Invitational. The throw extended Tausaga’s school record.

Spanoudakis’ mark is also a personal record, which came at the Musco Twilight Invitational.

For the men, Tuufuli ranks third in the country after launching a throw of 62.54 meters. That was good for a personal best and is second on the all-time list at Iowa.

Iowa took gold in the 4×400-meter relay at the Florida Relays against some of the best competition in the country.

Ten of the fastest 25 relay times this season occurred at the Florida Relays, and Iowa’s was the fastest among them.

Lawrence got out well in the event, giving Iowa an early lead. Woodard and Hofacker were able to maintain a competitive position for the Hawkeyes. Harris, as he has done countless times in his Iowa career, ran anchor and sealed the win.

The 3:03.10 time in the event is good for second-fastest in the country this season, trailing only LSU.

In the Week 4 coaches’ poll, the Iowa men and women got huge boosts in the rankings.

The Hawkeye men jumped up 11 spots, to No. 10. The men are also the top-ranked team in both the Big Ten and the Midwest region.

The women came in at No. 13, up eight spots from last week. The Hawkeyes are second in the Big Ten, trailing only Ohio State, and third in the Midwest.

Both squads will have the highest ranked teams competing at the Drake Relays.