Iowa’s wins over Nebraska are just what it needed heading into the back half of the regular season. 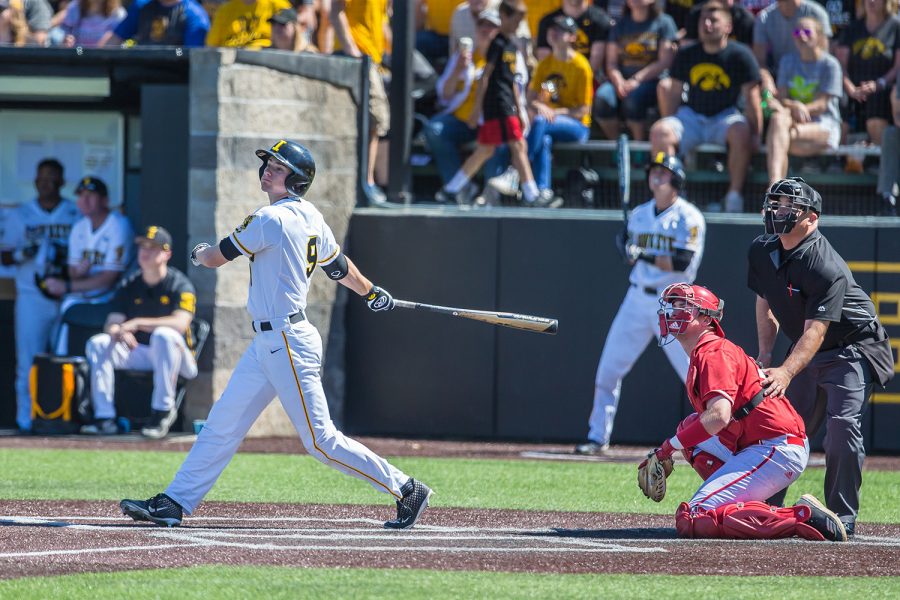 Iowa outfielder Ben Norman watches the ball after making contact during a baseball game between Iowa and Nebraska at Duane Banks Field on Saturday, April 20, 2019. The Hawkeyes defeated the Cornhuskers, 17-9.

On March 24, Iowa baseball lost to Indiana on the road, 7-1. That loss marked the first time since 2008 that the Hawkeye baseball team started the season 0-3 in conference play.

At the time, Iowa’s record stood at 11-10, and it had scored more than 5 runs in a game just once in its previous 10 contests.

Now, fast-forward nearly a month later, and this is almost a completely different Hawkeye baseball team.

Since the final loss to Indiana, Iowa is 12-5, 9-3 in Big Ten play, and a winner of four-straight conference series. This past weekend’s series against Nebraska stands as a prime example of such improvement.

The Huskers boast two strong arms in their Friday-Saturday rotation: Matt Waldron and Nate Fisher. Waldron entered April 19 with a 1.76 ERA, and Fisher had run up a 2.28 mark. The pair gave up 9 runs (5 earned) on 13 hits in 12.1 innings against Iowa.

The offensive explosion — something Iowa had been searching for — appeared in the second game. The Hawkeyes scoured 16 runs in a three-inning span in their second win over the Huskers. Iowa’s 17 runs in the game are just one shy of its season-high mark set against Evansville on March 9.

Point being, it had been longer than a month since Iowa scored more than 10 runs in a game. It took 26 games, but the Hawkeyes pulled off that feat against the conference’s best team.

There are plenty of regular-season games to play, but Iowa’s recent play in the conference shows this team has made great strides.

Each season, it seems as though the program notches a signature Hellerball win. Last season, it was series wins over No. 7 Michigan and No. 12 Oklahoma State. No. 30 Nebraska isn’t ranked so highly as those teams were, but up until this weekend, Iowa hadn’t had a series win quite like that this season.

And, the two wins against Nebraska not only alter Iowa’s future in a positive way, they scramble things up in the Big Ten standings; six of the 13 programs have a conference record of .500 or better.

At the beginning of the season, the conference coaches didn’t predict Iowa to finish in the top seven. But looking at the current standings, the Hawkeyes have the fourth-best conference record and are tied with Indiana for the second-most wins of any Big Ten team.

Now, after snagging two wins against a top-30 program, Iowa’s right back in the race for the conference’s top spot. Again, the regular season is far from over; including today’s contest against Milwaukee, Iowa has 16 games left.

But the way Iowa has played recently, especially in conference play, should be extremely encouraging for Hawkeye fans. Because when it comes down to it, the series win against Nebraska might be the biggest turning point for Iowa this regular season.