Iowa softball’s pitching staff shut out Rutgers on April 21, capping a strong stretch for the arms in the circle. 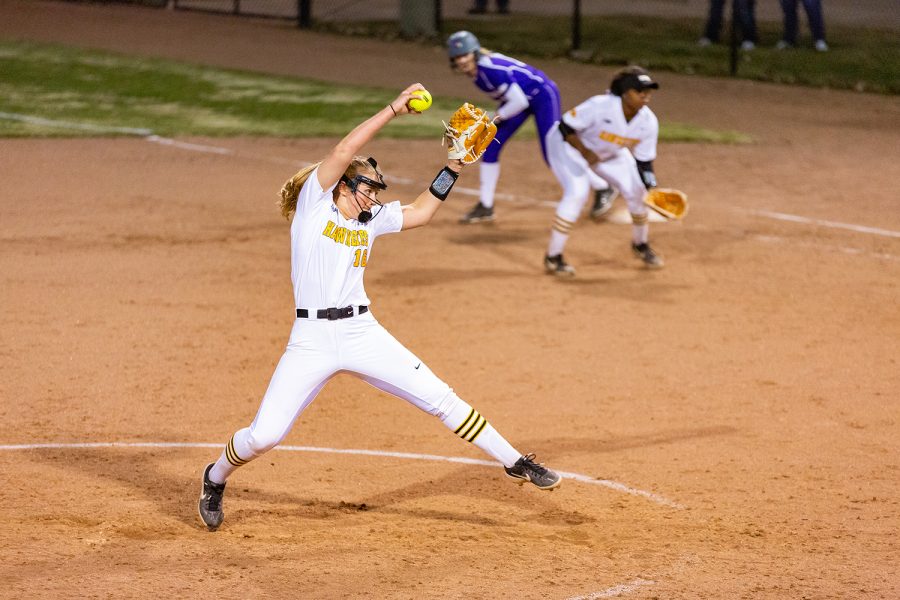 Iowa pitcher Sarah Lehman winds up to pitch during a softball game against Western Illinois on Wednesday, Mar. 27, 2019. The Fighting Leathernecks defeated the Hawkeyes 10-1.

Iowa softball is playing much cleaner in a lot of respects, following the end of an 11-game losing slide.

Stronger looks from the circle are at the center of the improvement the team has experienced. Starter Allison Doocy spent much of the beginning of the season dominating the pitch count for the staff, but recent progress by other pitchers has given Iowa more arms to work with.

This has made a big difference in recent games and — despite a sometimes-lagging offense — has given the team chances to win coming down the stretch.

170.2 — Innings pitched by Doocy this season

Even though other pitchers have begun to get more looks in the circle, Doocy still dominates in the innings pitched category.

A large part of this is her ability to finish games. The junior has an affinity for taking control of opponents for long stretches; early in the season, she posted an impressive five-game streak of complete games from Feb. 17 to March 1, in which she gave up only 4 earned runs.

Although she struggled against Illinois on April 12, giving up 7 earned runs in 4 innings, she has started to show signs of the dominance she displayed early on. Just a day after that lackluster performance against the Illini, the junior gave up only 2 earned runs in a marathon eight-inning matchup against Illinois.

Perhaps the most improved pitcher up to this point is sophomore Sarah Lehman.

Lehman had her turnaround game on April 17 against Drake. The sophomore posted one of her best outings with 4 innings pitched and only 3 earned runs given up to go along with 4 strikeouts. This is a different pitcher from the one fans saw on March 27 in the home-opener, in which the right-hander came in for 2 innings and gave up 3 earned runs on 5 hits.

Lehman took the mound in the second of two contests on April 19 and pitched 6 innings, giving up only 5 hits and 1 earned run. The sophomore walked 2 batters and struck out 5, setting up her team for the win. But the slow offense didn’t take advantage of the solid pitching. The Hawkeyes went on to lose, 1-0.

Having this extra arm to work with will be huge for head coach Renee Gillispie’s squad. In her first season in the Big Ten, perhaps an adjustment period is all the first-year pitcher Lehman needed.

4 — Runs given up last weekend in series against Rutgers

The pitching staff as a whole has only had spurts of greatness in the last few weeks. Two rough 12-run outings against Illinois on April 12 and 13 made for a difficult series. Doocy had one of her worst outings on the year on April 12 against the Illini.

But the series finale on April 13 was a different story. Doocy kicked off the strong run the pitching staff is on with an eight-inning outing in which she only gave up 2 earned runs and struck out 7.

Since then, the staff has been solid. It shut out a good Rutgers offense on Sunday in the 4-0 win and only gave up a single run in the 1-0 loss on April 19.

Having a strong staff will pay dividends, but the offense needs to pick up the slack to convert on the opportunities it will see.