UI professor Minetta Gardinier will be racing in an all-women's airplane race this coming summer. 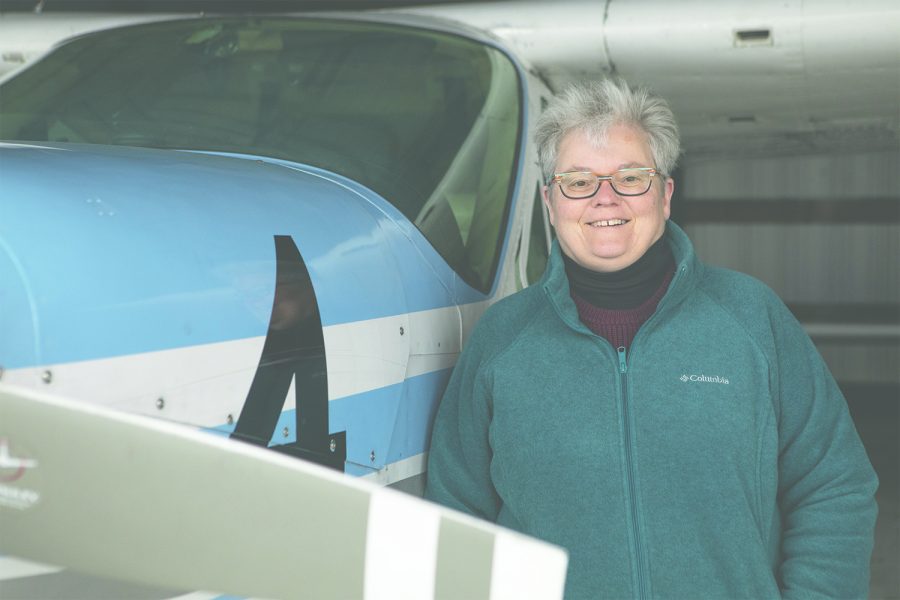 University of Iowa professor Minetta Gardinier poses for a picture next to the 1978 Cessna Cardinal at the Iowa City Municipal Airport on Wednesday, April 10. Gardinier races the Cessna in the United States and Canada.

“I tell people it was my midlife crisis craziness,” said Gardinier, a University of Iowa associate professor of pharmacology and molecular biology.

Gardinier started flying at 49. She took her first introductory flight after visiting the local airport and was taken ever since.

She shares her plane with a fellow professor at UI in the Biology Department. On the side of the pilot’s door, the name of Ann Darr, a poet and UI alum, is written and honors her service as one of the Women Airforce Service Pilots in World War II.

Gardinier is about to compete in the 43rd Air Race Classic in June, an all-women-pilots airplane race. 2019 also marks the 90th anniversary of women’s air racing, and it’s the first year the classic will go international with its routes, including a stop in Canada.

Gardinier said one of the best parts of flying is independence, being able to fly wherever she wants, whenever she wants. It has ruined the commercial flight experience for her.

“I always kid with people saying I can take the biggest shampoo I want,” she said.

Theresa White, who has known Gardinier since 2008 in their first race, will be her flying partner for the second time this year.

RELATED: An inside look into the University of Iowa’s Hospitals and Clinics’ AirCare team

“It changed my life, gave me a new focus and direction, opened up a whole new world of the aviation community,” White said. “It gave me self confidence, and it’s just a lot of fun.”

Gardinier said approximately 7 percent of pilots in the country are women; for commercial airline pilots, that number is lower, at around 4 percent.

“Professionally, I’m a neuroscientist, and in the science fields, you talk about women being underrepresented,” Gardinier said. “When I started taking lessons, I was really shocked with how underrepresented women are in aviation.”

From a young age, Gardinier said her mother helped prepare meals for commercial flights at the smaller Syracuse, New York, airport, and one of the perks of the job was tickets to fly. They took flights to such places as Long Island to see family, and she said she never saw a single woman pilot.

Kayleigh Bordner, who currently works for Ameriflight as the captain of a BE-99 cargo plane, first encountered the classic as a part of Indiana State University’s college team.

“I think it’s a fantastic organization,” she said. “It really opens doors for women in aviation, especially on the collegiate side.”

On the other end of the age scale, Gardinier said, the first race she flew in in 2008 featured Ruby Sheldon, who was around 90 at the time and was one of the first instrument-rated helicopter pilots in the country, male or female.

Such Big Ten schools as Ohio State and Purdue have college women’s air-racing teams, and Gardinier said that before she retires, she would like to see the UI have one. She’ll retire  in July after 21 years.

“Right now, it’s probably the best time to get into the field of aviation,” Gardinier said. “Because there’s a really serious pilot shortage, and there are a lot of different careers that I never knew about when I was growing up.”