An Iowa City visit from Democratic presidential candidate Tulsi Gabbard brings hope to the table amid a tense political climate. 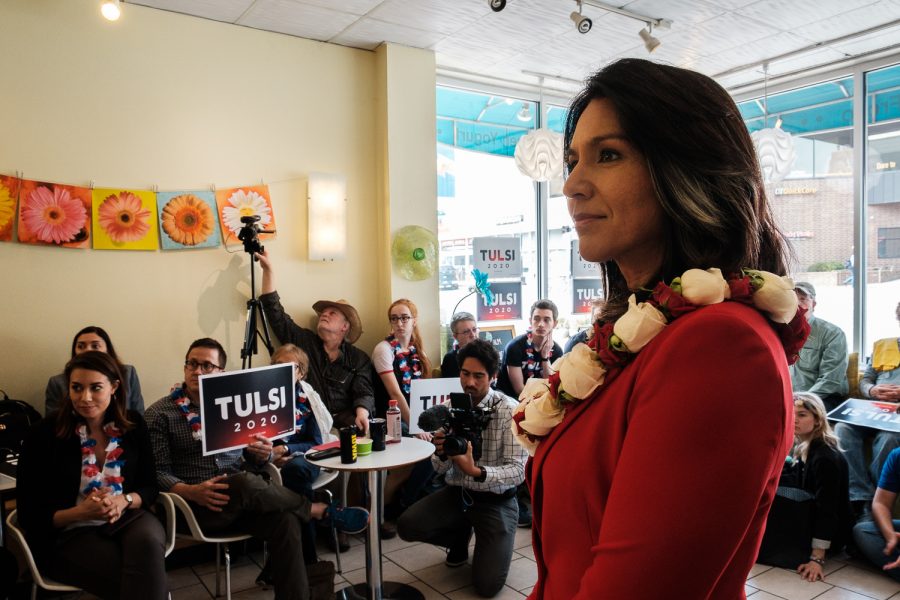 Rep. Tulsi Gabbard, D-Hawaii listens to a question during a meet-and-greet at Yotopia in Iowa City on Tuesday, April 16, 2019. Attendees gathered to listen to Gabbard discuss topics such as defunding regime changing wars, environmental policies, and medicare for all.

Iowa City recently welcomed Rep. Tulsi Gabbard, D-Hawaii, to campus with hopes to hear about her presidential run in the 2020 election. I joined a crowd of supporters to listen to the congresswoman who, so far, has restored some hope among Americans who are disappointed in the way hate is so casually thrown around in national politics.

Gabbard made waves earlier this year when she denounced California Sen. Dianne Feinstein’s outright bigotry toward 7th Judicial Circuit nominee Amy Coney Barret. Feinstein ignorantly proclaimed that “the dogma lives loudly within you” during Barret’s confirmation hearing, suggesting that her Catholic faith should disqualify her confirmation. As a Catholic myself, Gabbard’s mission to protect religious freedom sat well with me — especially to see her standing up to Senate Judiciary Committee Ranking Member Feinstein.

This was not her only time speaking out against members of her own party. As a 2020 presidential-nomination candidate, Gabbard emphasized the fact that “finding that the president of the United States did not conspire with Russia to interfere with our elections is a good thing for our country.” She maintains that the Democratic Party should not seek impeachment against President Trump.

Gabbard’s disdain of tribalism isn’t what should draw supporters, but it is a great example of her character and ability to choose what is right for all Americans — not just those who voted for her. Her independence is what prompted me to see her speak last week, and I was not disappointed with the outcome.

The man next to me at the Gabbard meet-and-greet, a retired classics professor, asked why I was most excited to see the candidate. I decided not to mention that I was a conservative in a sea of liberals and answered only with, “She seems genuine. I think our country needs more of that.” I asked the same of him and his answer, “I’m from the ’60s. We don’t like war,” was a sentiment many fans of the congresswoman shared.

She, unlike politicians of the left and right, acknowledges the damage done on foreign soil in the name of freedom. Her speech highlighted U.S.  fiscal spending and ways to redirect money from foreign wars to domestic programs. Gabbard, who currently serves as a major in the U.S. Army National Guard, has been an outspoken advocate of isolationism and against funding regime changes in the Middle East.

Better yet, the name “Trump” only left Gabbard’s mouth once during the entirety of her speech. Instead of finding a thousand different ways to say “Orange Man bad,” Gabbard used her own experience and platform to earn votes in her bid for the presidency.

As a conservative, I disagree with Gabbard on many areas of domestic and foreign policy, but I am grateful for her presence in such a tense political climate. She is a reminder that members of the opposite political party are not an enemy and truly want what is right for all Americans. I don’t think I can say the same about every candidate currently in the 2020 race for the White House.