An impressive weekend for the Hawkeye men wasn't reciprocated by the Iowa women. 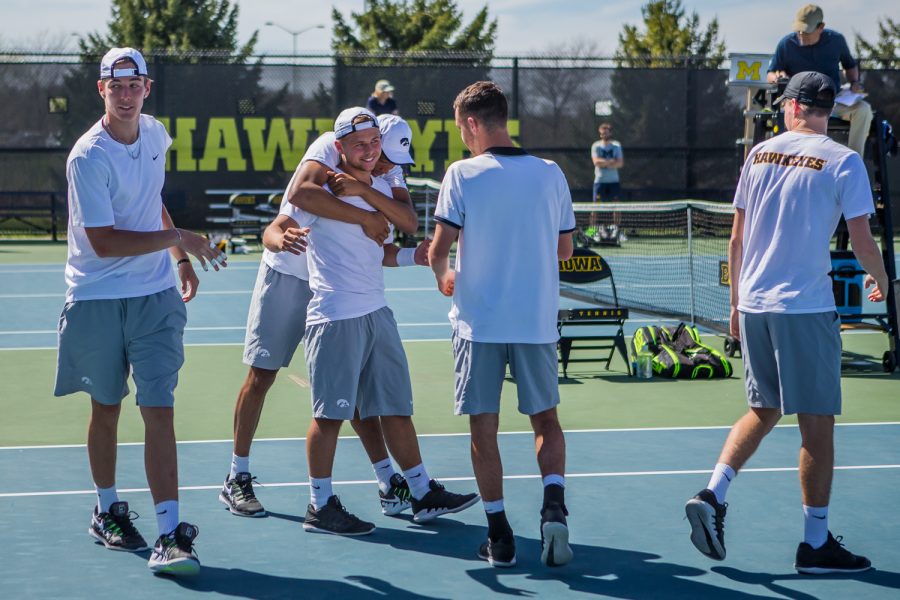 Iowa players huddle around Will Davies after his win during a men's tennis match between Iowa and Michigan at the HTRC on Sunday, April 21, 2019. The Hawkeyes, celebrating senior day, defeated the Wolverines, 4-1.

Closing out their regular seasons, the Iowa men’s and women’s tennis teams needed to win and get a little help to improve their positions in the Big Ten Tournament.

First, on April 19, the men’s team welcomed Michigan State, which came into the match without a conference win this season. The Hawkeyes dispatched the Spartans, 5-2, but not without a few late struggles.

Statistically, it was a major day in the history of Iowa’s program. The team notched its fifth conference win, its most since 1998. In addition, freshman Oliver Okonkwo tied teammate Will Davies with his 25th singles win this season, good for fifth in program history.

Iowa, however, began to spiral after quickly clinching the win. Davies and senior Jonas Larsen each fell in the third set, even after easily taking each of their first sets.

After a day off, the Hawkeyes returned to the courts for a contest against No. 19 Michigan. The team celebrated its lone senior, Jonas Larsen, prior to the match.

Junior Kareem Allaf and sophomore Joe Tyler were quick to take their first sets. Tyler wrapped up a victory in two, but Allaf fell in the third to Michigan’s Ander Fenty.

Okonkwo dismissed the Wolverines’ Mattias Siimar in two, and an emotional marathon on court four concluded with Will Davies’ 6-4 third-set triumph to secure the upset for Iowa. Larsen and Jason Kerst’s matches went unfinished, allowing them to join in the dogpile on Davies after his win.

A few hours later, the Hawkeyes returned to action to close their season against Illinois State. The Redbirds also came in without a conference win.

The Hawkeyes were headlined by an easy win on court six, where Kerst toppled the Redbirds’ Zacharias Rankloo Rasmusson. Davies and Okonkwo followed suit, and Iowa knocked off Illinois State with a 6-1 victory, finishing its season with three straight wins.

No. 50 Iowa easily showed its best doubles play all season this weekend, stringing together three points without dropping a single set.

Meanwhile, the women’s squad was tasked with finishing its season on the road.

Starting on April 20, the Hawkeyes paid a visit to No. 42 Wisconsin. Despite an easy grab of the doubles point, only sophomore Danielle Burich took a singles win, as the team lost, 4-2. Junior Elise van Heuvelen Treadwell kept it close to a score of 7-5, 7-5, while freshman Michelle Bacalla and sophomore Ashleigh Jacobs each required a third set to settle the match.

“We were not happy with the last match we played,” head coach Sasha Schmid in a release. “I believe the heart and soul of a team is tested when you have to respond to a disappointing loss.”

The team tested its own heart and soul by traveling to Minnesota a day later. Yet again, the crew nabbed the doubles point, this time on the backs of freshmen Samantha Mannix and Cloe Ruette. In singles play, however, van Heuvelen Treadwell scored the only singles point, as the team fell to the Gophers, 5-2. Bacalla drew her match into the third, only to be blanked in the final frame.

“It was tough to be on the short end of some Big Ten matches, but our team is very young and they’ve learned so much from these matches,” Schmid said in a release.

Up next, both teams head to their respective Big Ten Tournaments, which begin on April 25. The 10th-seeded women, playing in Lincoln, Nebraska, will face No. 7 seed Indiana. The men, who secured a No. 6 seed, will take on No. 11 seed Nebraska in Ann Arbor, Michigan.