Thanks to clutch hitting and strong pitching, Iowa baseball took down the Big Ten's best in a three-game series. 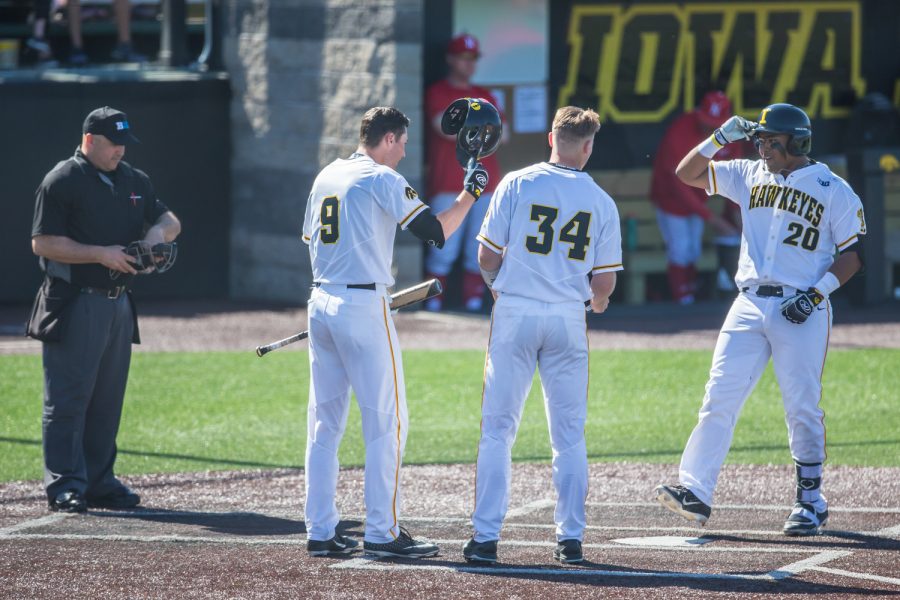 Iowa infielder Izaya Fullard (20) returns home after hitting a home run during a baseball game between Iowa and Nebraska at Duane Banks Field on Saturday, April 20, 2019. The Hawkeyes defeated the Cornhuskers, 17-9.

Another three-game series against a Big Ten opponent meant another ‘W’ for Iowa baseball.

Iowa took down Nebraska (11-4), the No. 1 ranked team in the Big Ten, taking two games of a three-game series, thanks to Zeb Adreon’s walk-off in Game 1 and an offensive explosion in the fifth inning in Game 2.

Game 1 starter Cole McDonald threw his sixth quality start of the season, tossing six innings and allowing just 2 runs on 4 hits to give Iowa a chance to win it in the bottom of the ninth inning.

Then, junior Zeb Adreon delivered in the clutch with an RBI single in the final inning to lift the Hawkeyes over the Huskers, 3-2.

“To come up big like he did,” Iowa head coach Rick Heller said. “He’s a good hitter and clutched up big time. I felt there was a really good chance he was going to come through in that situation the way he has been swinging it.”

The Hawkeyes kept things rolling in Game 2 in front a season-high 2,414 fans.

After Nebraska starting pitcher Nate Fisher retired the first nine Iowa batters, the Hawkeyes scored 3 runs in the fourth inning to take a 3-1 lead before an offensive eruption in the fifth inning.

Tied at 3-3, Iowa took off for 8 runs to pull ahead by a wide margin and never looked back. The Hawkeyes strung together 7 two-out hits, starting with senior Chris Whelan’s single. After Mitchell Boe reached on a hit-by-pitch, catcher Austin Martin doubled deep to center to drive in the first two runs of the inning.

Sophomore Izaya Fullard then hit a bomb to deep center field to put Iowa ahead, 7-3, for his third home run of the season.

“I’ve never been a part of a game or inning like that,” Fullard said. “Up-and-down the lineup, guys were barreling balls and finding holes. It was fun to be a part of.”

Iowa continued its onslaught, putting up 5 more two-out runs in the sixth to go up 16-4 before besting Nebraska, 17-9, to clinch the series.

Iowa’s 17 runs on 17 hits in Game 2 only trailed its 18 runs on 19 hits against Evansville earlier this season on March 9.

Iowa attempted to pick up a clean sweep in Game 3 as Whelan attempted to extend his team-best hitting streak to 11 games.

Unfortunately for the senior, it was to no avail as the Hawkeyes dropped the final meeting, 3-2, on Sunday.

Even though junior Grant Judkins posted another stellar performance on the mound – allowing 3 runs (1 earned) on 3 hits and no walks – Iowa only managed to record 5 hits, one of which was a home run to left field from McCaffery in the seventh. It marked McCaffrey’s first-career home run.

“It’s disappointing; we had an opportunity to make a big statement,” Heller said. “It’s still a good weekend, but not getting the sweep when it’s right there at your fingertips hurts a little bit, and it should.”

Overall, the Hawkeyes still had themselves a big weekend, as they moved up to fourth in the Big Ten standings, sitting at 23-15 overall and 9-6 in Big Ten play.

“We competed hard this weekend. Getting the series [win] this weekend was important,” Heller said. “I’m not going to let it ruin the fact we have improved and are continuing to get better.”