Nebraska had no answer for Iowa's offense during a three-inning stretch midway through the March 20 game. 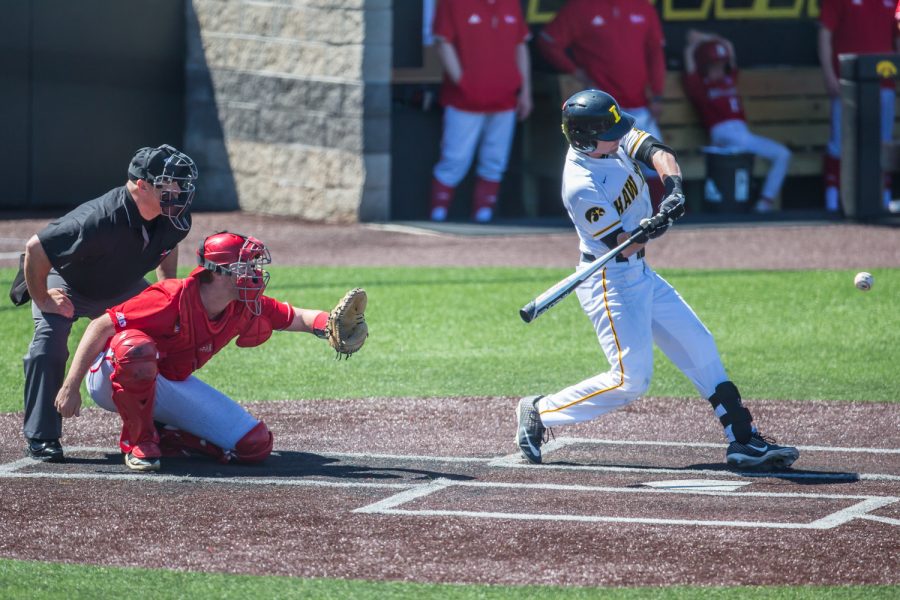 Iowa infielder Chris Whelan swings while at-bat during a baseball game between Iowa and Nebraska at Duane Banks Field on Saturday, April 20, 2019. The Hawkeyes defeated the Cornhuskers, 17-9.

In its second-best offensive performance of the season, Iowa baseball poured runs like a rainstorm on Nebraska at Banks Field.

The Hawkeyes erupted for 17 hits in their 17-9 win over the border-rival Huskers.

“I’ve never been a part of a game or inning like that,” Izaya Fullard said in a release. “Up and down the lineup, guys were barreling balls and finding holes. It was fun to be a part of.”

Fullard was one of 10 Hawkeyes to notch at least 1 hit on March 20. He also recorded his third home run of the season.

Teammate Chris Whelan had arguably his best outing of the season, going 4-for-5 at the plate with an RBI. Ben Norman added 3 hits as well.

It was a tremendous showing offensively for an Iowa team going up against a strong pitching program. Nebraska starter Nate Fisher had a 2.28 ERA and had allowed 30 hits in 43.1 innings.

Against Iowa, his day concluded after 4.2 innings in which the Hawkeyes posted 7 runs and 5 hits on him.

“Sometimes baseball is crazy. When a guy Fisher is so good like that, you get anybody else out there, and it just seems a little easier,” Iowa head coach Rick Heller said in a release. “We’ve been talking as a group that we felt like we’re on the verge of breaking out offensively. It happened in the fourth, fifth, and sixth innings.”

During the fourth, fifth, and six innings, Iowa scored 16 runs.