Iowa salvaged one win in a three-game set in New Jersey, because its bats continued to struggle. 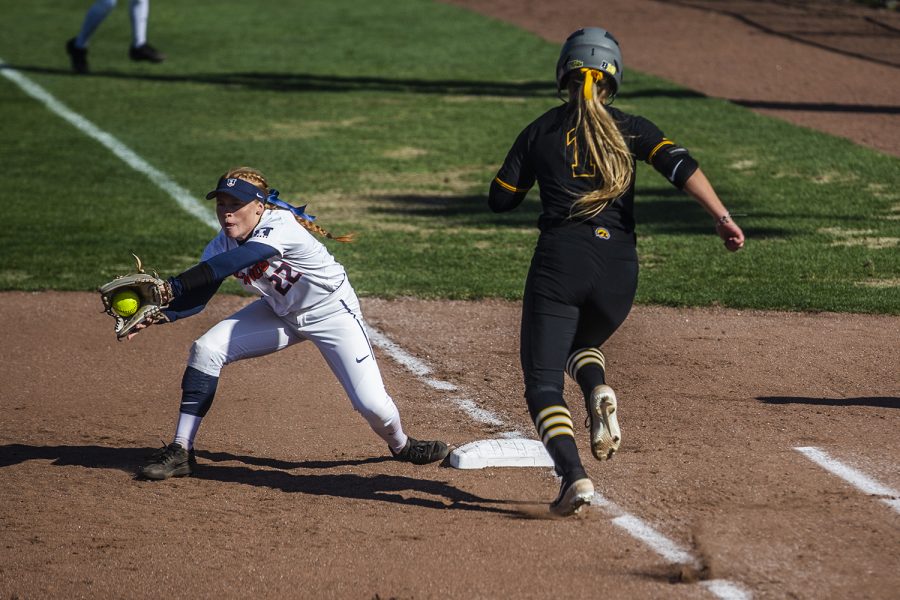 Illinois utility player Avrey Steiner catches the ball as Iowa infielder Cameron Cecil runs to first during the game against Illinois at the Bob Pearl Softball Field on Saturday, April 13, 2019. The Hawkeyes defeated the Fighting Illini 4-3.

Iowa has now lost all five Big Ten sets so far this season and sits in last place in the conference with a 3-12 record.

The series started off poorly for Iowa; it fell in the first two games in a doubleheader on April 19. The Hawkeyes managed just 1 run in 14 innings in the two games despite solid pitching that gave up merely 4 runs.

Iowa’s problem seems to be stringing hits together with runners in scoring position — it left 16 runners on base, including 10 in the second game.

“We are still in the same situation,” Iowa head coach Renee Gillispie said. “Sitting with runners on and can’t seem to get that key hit.”

Part of the issue with the frozen bats might soon be fixed with some small tweaks in the lineup.

Pitching continued to be Iowa’s strength. On April 19, Iowa got solid starts from Allison Doocy — who went six innings, giving up 3 runs on 4 hits — and Sarah Lehman, who pitched the distance (six innings), giving up just 1 run on 5 hits.

Lehman continued her solid pitching on Sunday, when the Hawkeyes concluded their weekend bout with the Scarlet Knights with a 4-0 win.

Lehman again went the distance, giving up 0 runs on just 1 hit, only needing 2 strikeouts to send the Hawkeyes back home with a win.

“Sarah did a fantastic job in the circle,” Gillispie said after Sunday’s win. “They only had 1 hit off of her, and 16 out of 21 batters she had the first pitch strike on. She kept them off balance with her change up. Just all in all, it was a great job by her.”

While the offense by no means erupted on Sunday, it finally got the hits required to win the ballgame.

Most of the damage done by Iowa was in the second inning, in which it put up 2 runs with a little bit of small ball and timely hits.

“The second inning, we exploded,” Gillispie said. “We are seeing some really good things and a lot from our freshmen. They’re making some good things happen.”

Havyn Monteer and Hamilton both recorded RBIs in the second inning, and Abby Lien added a 2-run homer in the sixth.

Iowa will now turn its sights on Nebraska, which it will host in a doubleheader April 24 starting at 4 p.m. This coming weekend, the Hawkeyes will travel to Minnesota to take on the Gophers.

“We have Nebraska coming in on Wednesday, and those will be two good games for us,” Gillispie said. “With Sarah looking strong, we have two strong pitchers in our lineup, and that will help us a lot.”