Nebraska enters today’s game as the best team in the conference, but Iowa baseball is up for the challenge. 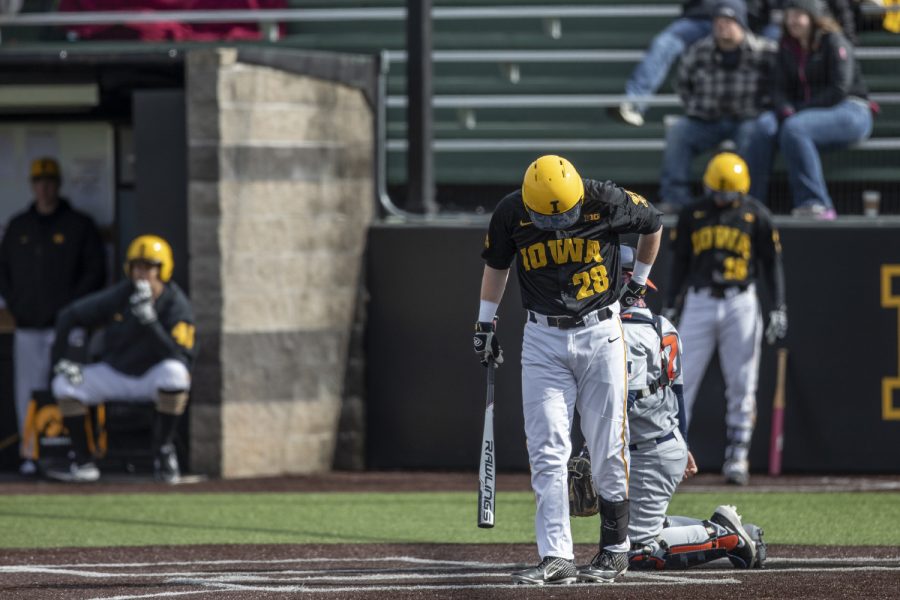 Hawkeye batter Chris Whelan prepares to bat during the baseball game against Illinois at Duane Banks Field on March 30, 2019. The Hawkeyes defeated the Fighting Illini 2-1 after the 9th inning.(Ryan Adams/The Daily Iowan)

After skating by Northern Illinois earlier this week, Iowa baseball has the Big Ten’s top dog in town for a three-game series that will have a definitive hand in shaping the race for the conference tournament.

Granted, a lot can happen in the rest of the regular season; 19 games remain for the Hawkeyes, but a series win over the Huskers would go a long way in narrowing the team’s three-game separation.

“With Nebraska coming to town — regardless of where either one of us sit in the standings — there’s always going to be a big crowd, a lot of intensity,” Iowa head coach Rick Heller said. “They are a team that’s coached really well, they play hard, and they play the game the right way.”

For the Hawkeyes, winners of two-straight games, they’ll need consistent at-bats in order to take down one of the conference’s best programs.

“I really feel like we’re on the verge of breaking out big time with our offense,” Heller said.

The win over Northern Illinois on Tuesday was a step in that direction. Iowa notched 14 hits and ended the game on a hot note, scoring 4 runs in the final two innings.

Leadoff man Chris Whelan, who has struggled at times this season, notched a pair of hits in his five at-bats.

“It feels great,” Whelan said. “My main goal is always to get on base and try to set the table for the rest of the guys in the lineup. We’ve got a lot of guys with some RBIs in the middle of the order like Ben Norman and Austin Martin — so, as long as I can get on base for them, I know they’re going to hit me in and put some runs up on the scoreboard.”

Martin, Tanner Wetrich, and Brett McCleary combined to notch half of the team’s hits on Tuesday.

The win against the Huskies proved to be the Hawkeyes’ second game in a row with double-digit hits, and they’ll need a repeat effort this weekend, clashing with Husker Matt Waldron, Nebraska’s best pitcher. The senior has a 1.76 ERA and boasts a 5-0 record in his six starts. In 51 innings on the mound, Waldron has struck out 50.

The rest of the Husker starting pitching rotation doesn’t fall off from Waldron, though. Nate Fisher looks to be Nebraska’s Saturday starter. He has a 2.28 ERA, allowing just 30 hits in his 43.1 innings.

Reece Eddins, though — Nebraska’s Sunday starter — is the vulnerable arm of the trio; his 4.37 ERA is the worst in the group, and his 39 hits are the most allowed on the team this season, despite appearing in the same number of games as Waldron and Fisher.

Working in Iowa’s favor, though, is home-field advantage.

The Hawkeyes are 12-3 at Banks Field this season, and Heller doesn’t see his team giving any sort of ground on its home turf this weekend.

“You don’t come onto our field and beat us, and that mentality has to be,” he said.