Hawkeye tennis seeks to finish on a high note

Both Iowa tennis teams are set to close out the regular season with a chance to move up in the Big Ten standings. 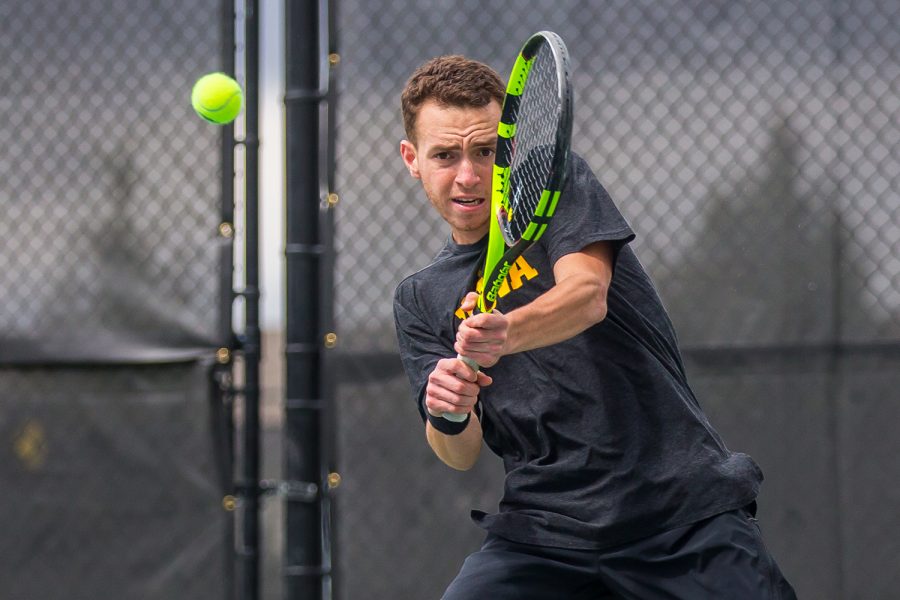 Iowa's Kareem Allaf hits a backhand during a men's tennis match between Iowa and Ohio State at the HTRC on Sunday, April 7, 2019. The Buckeyes defeated the Hawkeyes, 4-1.

Both the Iowa men’s and women’s tennis teams will attempt to bounce back this weekend after tough losses to Big Ten opponents last week.

The women’s team will hit the road one final time after Nebraska spoiled its Senior Day last weekend. The Hawkeyes will travel to Wisconsin and Minnesota hoping to regain some momentum.

“We want to attack these final two matches with energy and spirit,” Iowa head coach Sasha Schmid said. “It’s exciting to have two great opponents on the final weekend of the regular season. It should be a great test for us on both [April 20] and [April 21].”

Iowa desperately needs to regain control in the conference. The Hawkeyes are stuck in the bottom half of the Big Ten, sitting in eighth place.

In order to qualify for the Big Ten Tournament in Omaha, the Hawkeyes need to finish in the top 10. Iowa will have to pick up wins against both the Gophers and Badgers or split and hope for a Penn State loss. Right now, the Nittany Lions control the last spot for the tournament with a 3-6 conference record.

Things won’t be easy for Iowa, either — the Hawkeyes have losing records to both Wisconsin and Minnesota in the all-time series. Iowa trails the Gophers (39-22) and the Badgers (41-10). The Hawkeyes have also played poorly on the road, sitting at 3-5, compared to a strong 8-2 home record.

“Of course it’s important for us to get these two wins this weekend,” sophomore Ashleigh Jacobs said. “We are going in with the mindset of attacking each match and are excited to get after these two teams on the road.”

If Iowa can pull out the doubles victory and both Jacobs and Michelle Bacalla can stay hot, then the Hawkeyes could have a solid chance of making the tournament. Jacobs and Bacalla each enter the weekend on a five-match winning streak in singles.

The No. 50 Iowa men’s team, on the other hand, has all but cemented its place in the Big Ten Tournament. Sitting at 4-5, Iowa will begin its final home stand against a struggling Michigan State team for Senior Day on April 19.

The Spartans are just 6-18 overall, 0-9 in the Big Ten. With an Iowa win, the Hawkeyes will be headed to the conference tournament.

Although a conference tournament appearance would be nice for Iowa, the men’s team has bigger goal: make the NCAA Tournament for the first time in program history.

“This weekend is extremely important for our NCAA bid,” head coach Ross Wilson said. “Bottom line, if we beat Michigan and Michigan State this weekend, we will qualify for the NCAA Tournament. The guys know that, and we couldn’t ask for a better scenario to play our last two matches of the regular season at home to secure our first NCAA bid.”

In addition to the Spartans, Iowa will also take on No. 19 Michigan and Illinois State on April 21. If the Hawkeyes can best both Michigan teams, they’ll surpass their best Big Ten victory total since 1998.

“It’s going to be a massive weekend for us, there’s no doubt about it” sophomore Will Davies said. “To achieve our goals that we set at the start of the season, we’ve got to win every match leading into the Big Ten Tournament. As a team, we’re not really focusing on records; we’re just taking each match as it comes, and we hope that our tennis can do the talking.”

Trying to make a statement in its final stretch, Wilson will depend on the dynamic pairing of Davies and Oliver Okonkwo. The two have produced a 20-9 doubles record and rank 67th nationally.