Hawkeye softball aims to put pieces together against Rutgers

With a three-game series at Rutgers this weekend, Iowa softball needs to a change from its trend of losses. 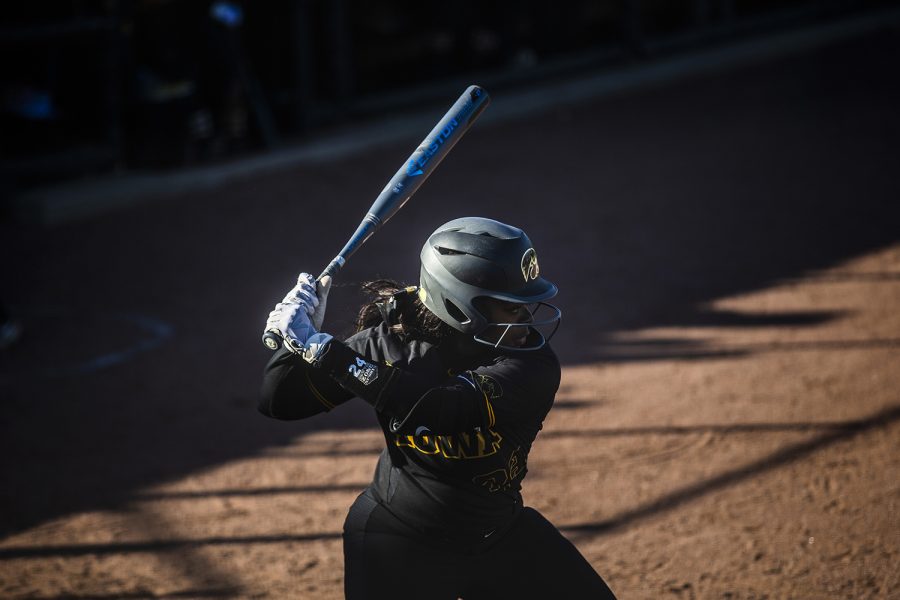 Iowa infielder Donirae Mayhew prepares to swing the bat during the game against Illinois at the Bob Pearl Softball Field on Saturday, April 13, 2019. The Hawkeyes defeated the Fighting Illini 4-3.

With a three-game series at Rutgers this weekend, Iowa softball has a lot to prove.

Of course, the team has focused on fundamentals in recent weeks after winning only once in its last 11 games. Getting sound looks at the plate, having confidence in the circle, and fielding cleanly have been focal points for head coach Renee Gillispie.

Hawkeye softball has proven it can do all of these things at some point in its season. Even recently, the team has had strong appearances despite losing streaks. The bats were hot against Illinois on April 13, blasting 15 runs in a doubleheader. Pitching was solid on Wednesday night against Drake, with sophomore Sarah Lehman posting one of the best outings of her career.

What has often ailed the team is doing all of these things simultaneously. The pitching staff also gave up 15 runs in the doubleheader on April 13. The bats were silent against Drake, with only 2 hits and no runs.

Regardless, missed opportunities have been common in most of the team’s games. In the loss to Drake, the team stranded six runners, with several in scoring position. Similar problems plagued the team in the April 12 loss to Illinois, and Gillispie was concerned with the team’s ability to take advantage.

“We had two doubles that got us in situations where we were able to score and just didn’t come through with the key hit we needed,” she said after the loss to Illinois. “It’s there; the pieces are there.”

The pieces she’s talking about have been explosive at points this season.

Junior transfer DoniRae Mayhew has spent most of the season batting above .300, although she dipped just below that mark after going 0-for-3. But in the win on April 13, Mayhew went 4-for-4 with 3 runs and 2 RBIs.

Gillispie said that April 13 looked to be a time in which the team’s work finally showed out on the diamond.

“We had some great hits,” she said after the victory. “We’re talking all the time about being balanced and being able to get some solid cuts, and they did that [against Illinois].”

The offense was silent in the weeks leading up to that game, so it felt as if the team may have turned a corner. But a shutout loss to Drake quashed that. The Bulldogs are on a 16-game winning streak, though. Another common theme of the season is very strong opponents, which the team sees as an asset. The trend of strong opponents will continue this weekend against the 20-19 Rutgers team.

“It does help us to know [we are playing hard teams],” Gillispie said. “Illinois at home [helped] us out. Rutgers on the road — they took a game against Illinois this last week. It’s a brawl in the Big Ten.”

Pitcher Allison Doocy will take the circle for the Hawkeyes this weekend as the team’s go-to starter. She struggled in one game against the Illini on April 12, giving up 7 earned runs. But since then, she has posted 11 innings and only given up 2 earned runs.

The team has proved it can get all these things going, but lining them up together will be a focus this weekend.