Iowa softball pitchers put the team in position to win on Wednesday, but quiet bats helped Drake keep Iowa off the scoreboard. 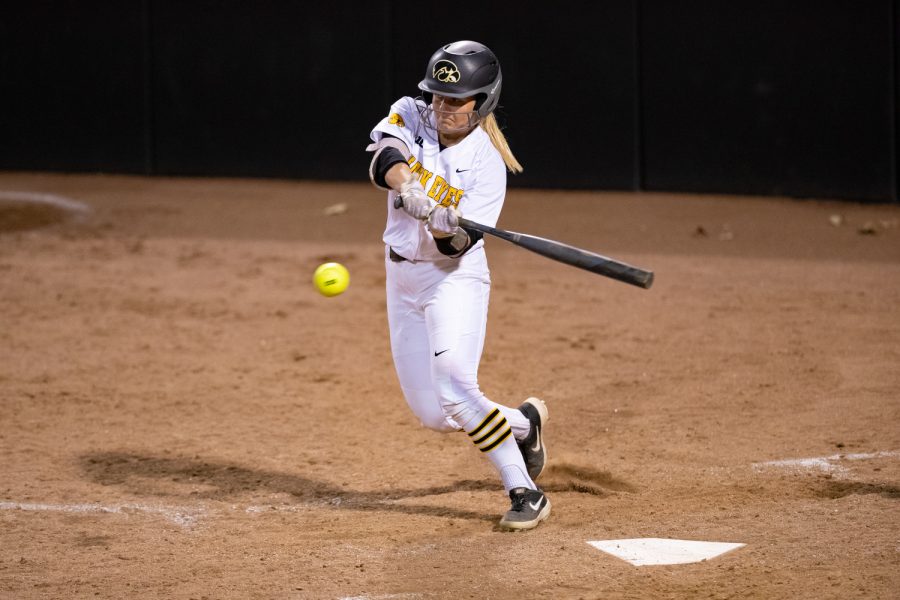 Iowa's Havyn Monteer winds up to connect on a pitch during a softball game against Western Illinois on Wednesday, Mar. 27, 2019. The Fighting Leathernecks defeated the Hawkeyes 10-1.

Hawkeye softball was shut out by Drake, 5-0, on the road on Wednesday night, stretching Iowa’s road losing streak to four games.

Drake extended its long winning streak to 16 games. The Bulldogs are on a tear right now, posting dynamic offensive numbers, and the complete win against the Hawkeyes on Wednesday night was no exception.

Starting in the circle for Iowa was Sarah Lehman, who posted one of her strongest outings of her career. The freshman struggled in many of her opening appearances this season, carrying a 5.94 ERA into her start at Drake. She gave up 8 earned runs in 5 innings in her previous start, so a solid outing was needed.

She gave her team every chance to win on Wednesday night, only giving up 3 earned runs in 4 innings for her team. But the offensive side was a struggle for the Hawkeyes, and the team couldn’t capitalize on a better outing from the starter.

It wasn’t just Lehman who posted solid outings. When the starter came into a jam in Drake’s eventual four-run fifth inning, junior Allison Doocy came into relief. Doocy packed in three strikeouts in her sole inning. Much was the same for Erin Riding, who came into the game in relief in the sixth and posted a strikeout and gave up only one hit.

The team scored a lot of runs last weekend against Illinois – the team knocked in 15 total runs during the team’s double-header on April 13. It appeared that the offensive plague that had stricken the team for several weeks had finally lifted, until another quiet performance against the Bulldogs.

Eleven Hawkeyes struck out in the matchup, and only junior Havyn Monteer managed to get a hit (she had two). Four Hawkeyes did draw walks, though, but nothing came of it – Iowa left six runners stranded on base on the night.

It was a close game until Drake broke it open in the bottom of the fifth. The Bulldogs only knocked back two hits in the inning, but an Iowa error and multiple steals gave way to a four-run half inning.

Iowa has shown it can get everything going, but it has yet to be seen if it can get all these things going at the same time. Pitching was solid on Wednesday, but the offense wasn’t there to respond. The bats were hot for much of last weekend, but the pitching staff gave up runs left and right. Fielding was sketchy at best in March but has improved recently. Matching all of these elements up is a tight focus of the squad.

The team has improved a lot in the last several weeks, and it will continue to do so. But as the season progresses, the Hawkeyes must look to stay consistent in its play.

Iowa continues its Big Ten slate and takes on Rutgers in a three-game series in New Jersey over the weekend.