Inside and out: World-renowned sculptor and alum returns to UI campus

Charles Ray, a sculptor and artist, returned to the UI campus this week to give a series of lectures with two colleagues. 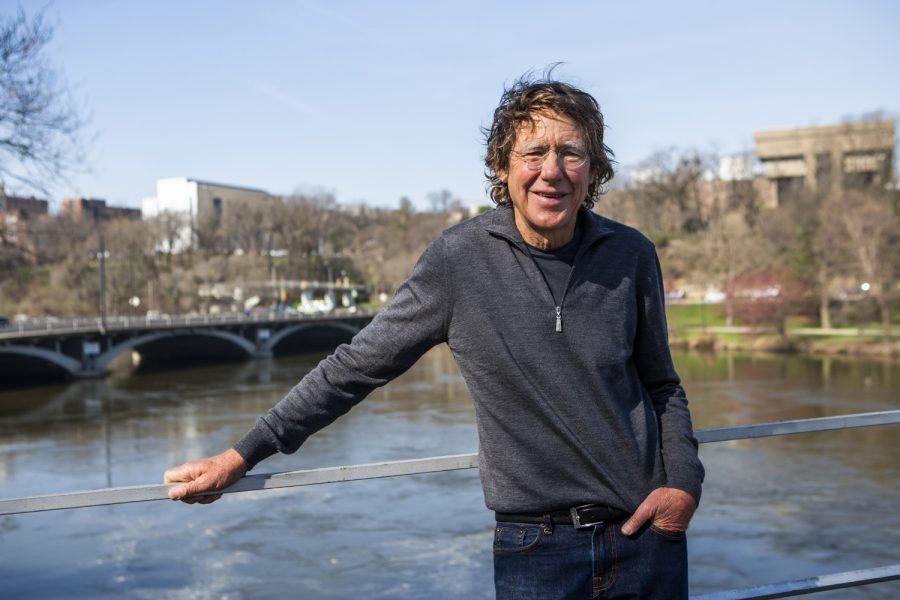 UI alum Charles Ray poses for a portrait on Tuesday, April 17, 2019. Ray studied contemporary art and has been featured in the New York Times.

Eyes narrowed through his round glasses, Charles Ray’s hand skillfully sketched an image of welded steel rods and wheels on the packaging of his Java House bagel. Every action Ray, a world-renowned artist, sculptor, and University of Iowa alum, took was that of an artist in a constant state of work.

Today marks the last day of Ray’s three-day trip to Iowa to give lectures and meet students. Having created everything from minimalist sculptures to re-creations of images capturing the detailed reality of nature and human-made objects, Ray’s work is difficult to classify into one particular category, but all of it has crossed boundaries and altered how people think about art, said Lauren Lessing, director of the UI Stanley Museum of Art.

“Your eyes are often flummoxed by what you’re seeing,” she said. “It blurs this boundary between what is art and what isn’t.”

“[Charles] didn’t want to just come and do one lecture where he just talked about his sculptures,” said Nic Arp, the director of strategic communications for the Liberal Arts College. “He had the idea to invite two friends of his and do a lecture series.”

Ray graduated from the UI School of Art and Art History in 1975, and his work has been displayed in exhibitions nationwide. While at school, he studied under Roland Brener, who exposed Ray to Modernist sculpture, and intermedia Professor Hans Breder, Lessing said.

RELATED: Dangerous sculptures and the make-out rock of Brazil

“You can see influences of both of those artists in Ray’s work,” she said.

By simply making a brief connection with Brener, Ray was able to get into an advanced sculpting class his very first year. The casual atmosphere of the UI in the ’70s encouraged students to break rules and experiment, Ray said, which allowed him to work overnight on some of his projects, acts that would exasperate his professors but resulted in some of his greatest work at school.

“I would sneak into the sculpture studio through the window,” Ray said. “I would climb up two stories, and go in at night, and sometimes just work all night long. You could do things like that back then.”

Most recently, Ray’s sculptures are made of steel, modeling human figures. Bernhard Mendes Bürgi, the director of the Kunstmuseum Basel in Switzerland until 2016, said Ray works in ways that focuses on sculptural principles and questions of proportion, dimension, space, and weight.

“It’s the way I understand the world — through sculpture,” Ray said.

Other works of his have replicated real objects. One of his sculptures, Unpainted Sculpture, details an entire car demolished in an accident, with even its smallest parts cast in fiberglass to be displayed as a whole. Lessing said seeing the sculpture herself changed the way she viewed every car accident from that moment forward.

Arp said the Liberal Arts College invites its most distinguished alums back to campus each year through the Alumni Fellows Program.

“Charles is the most important contemporary American sculptor alive,” Arp said. “To have him be one of our alumni is really a wonderful thing.”