The UI spent $3.875 million in a change order to replace Modern Piping, a construction company it has paid millions amid legal disputes on UI projects. 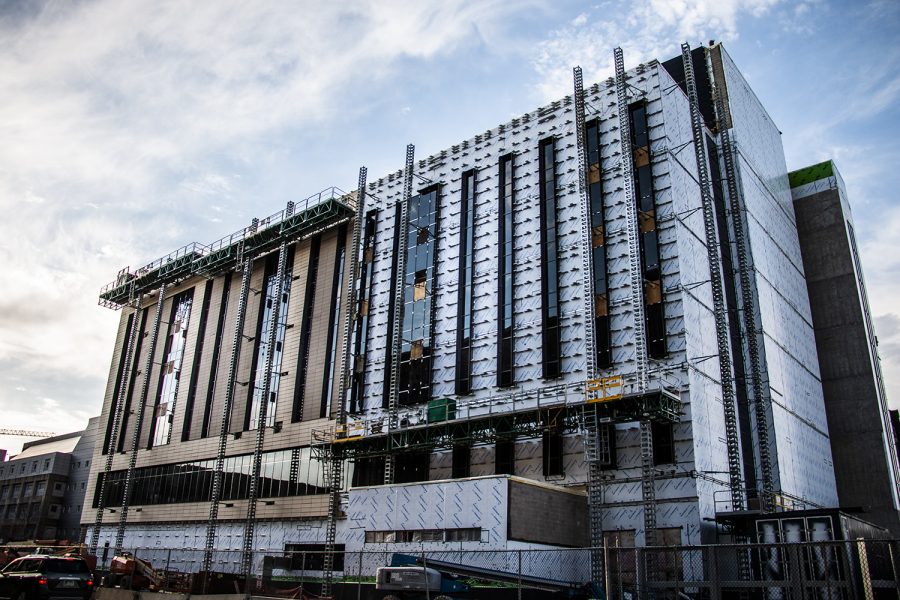 The new College of Pharmacy building, which is currently being constructed, is seen on Tuesday, April 16, 2019.

The University of Iowa paid nearly $4 million to replace construction company Modern Piping as a subcontractor on the project to build a new facility to house the College of Pharmacy amid costly legal disputes with the Cedar Rapids-based construction firm.

Records requested by The Daily Iowan show the UI in March 2017 “object[ed]” to Modern Piping’s bid to help construct a sprawling, 296,000-square-foot new pharmacy building. The contractor, Miron Construction, a company based in Wisconsin with a Cedar Rapids office, then requested a change order — at a cost of $3.875 million — to replace Modern Piping with Ryan and Associates.

The documents did not state the UI’s reason for the objection.

“The university proceeded in accordance with the contract,” UI media-relations Director Anne Bassett said in an email to the DI. “The contractor, Miron Construction, chose Ryan and Associates as the subcontractor to replace Modern Piping.”

Miron officials directed requests for comment to the UI.

At the time the UI requested Miron propose another subcontractor, the UI was about two years into its feud in court with Modern Piping. In 2015, the construction company filed a petition asking a 6th District Court judge to compel arbitration over payment for work on Hancher and for disputes on the UI Stead Family Children’s Hospital.

When a district court judge sided with Modern Piping, the UI appealed the arbitration award, contending that the arbitration panel wrongfully considered the Hancher and Stead Hospital complaints together. The Iowa Court of Appeals ruled in favor of Modern Piping in both cases earlier this year, and the state Supreme Court had previously declined to hear the UI’s case and deferred to the lower courts’ judgments.

As of April 4, the UI said it will have paid Modern Piping $73.9 million for its work on the two projects. The total includes a roughly $21.5 million award from an arbitration panel that a 6th District Court judge had previously affirmed, of which the UI still owes $17.9 million. Modern Piping was awarded $724,912.38 in attorney fees and expenses.

Now inching closer to completion, with construction anticipated to wrap up later this year, the pharmacy school’s new home will sit on the location that Quadrangle Hall previously occupied before its demolition in 2016. Construction started that year.

State appropriations as well as university and College of Pharmacy contributions and investments fund the $96.3 million project.

Bassett said the project funding will cover the cost of the change orders, and the project remains within its approved budget.

Per the regents’ policy manual, change-order requests exceeding a certain threshold of a project contract amount on projects with a budget above $1 million shall be approved by the regents’ office. The documents show former Regent Executive Director Bob Donley signed off on the change order.

“… No change orders are required to go to the full board,” regent spokesman Josh Lehman said in an email to the DI. “The board office evaluates any requested change order individually, based on the information provided in the request.”

Modern Piping CEO Ken Brown said that around early 2017, the time at which this change order was requested, he felt that the UI began doing what he said was “blacklisting” Modern Piping on projects. He identified the pharmacy facility as a project that Modern Piping was not awarded despite bidding low.

While Modern Piping’s bid came in lower than Ryan and Associates’ bid to work on the project as a subcontractor, Iowa Code does not require projects to be awarded to the lowest bidder.

Iowa Code states the state Board of Regents “shall advertise for bids for the contemplated improvement or construction and shall let the work to the lowest responsible bidder. However, if in the judgment of the board bids received are not acceptable, the board may reject all bids and proceed with the construction, repair, or improvement by a method as the board may determine.”

Brown said Modern Piping was in the position to make an attractive offer on work to be performed at the UI, and that was why Modern Piping bid on the project despite the mounting legal issues over the Stead Hospital and Hancher projects.

“We have a long history of getting projects done, and working through issues on one particular project doesn’t mean we cannot work well on a second project with the same customer as long as that customer is willing,” he said.

In the future, Brown said, he hopes Modern Piping can get the legal issues behind the company and return to the business of building facilities for the UI that the community can be proud of. However, he said his primary concern was the “apparent lack of respect for budgets and taxpayer money from the citizens and the state of Iowa.”

“We hear frequently from the University of Iowa that they need more money, they’re asking for more money,” he said. “Yet they make choices and decisions that indicate they’re not good stewards of the money that they’ve been given.”