Hawkeyes, Wetrich come back against Huskies

Tanner Wetrich went through a slump in late March, but he has returned in full form in recent games. 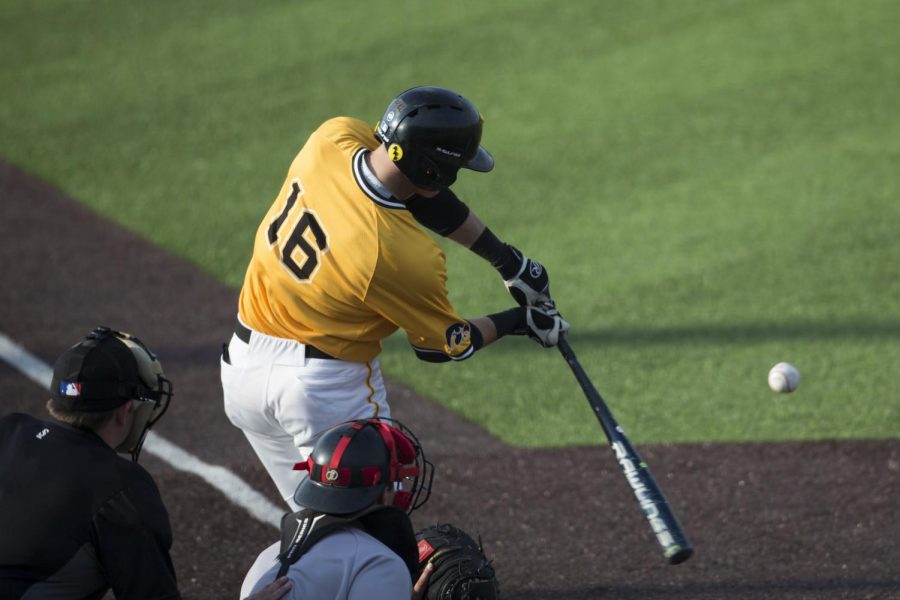 Iowa shortstop Tanner Wetrich swings at a pitch against Northern Illinois on April 16, 2019. The Hawkeyes defeated the Huskies, 8-6.

In Iowa’s 8-6 win over Northern Illinois on Tuesday, Tanner Wetrich finished 2-for-4 with a home run, a triple, 2 RBI, and 2 runs scored

That player, however, wasn’t the Wetrich fans saw in 2018. Last season, he hit 1 home run.

Wetrich started 15 games in left field that year, along with two at second base, two at designated hitter, and one at shortstop. He scuffled overall, hitting .224 and bringing in 11 runs.

Now, fast forward to 2019, and the story is completely different.

Wetrich’s No. 16 can be found almost every game at shortstop, where he has started 32 games this season. His increase in playing time has come with an uptick in production.

The Moberly, Missouri, native is now hitting .264 to go along with 16 RBIs and 5 home runs, which is tied for the team lead and five times the number he clubbed last season.

“Last year, I wasn’t happy with how I played, I wasn’t happy with a lot of things I did myself,” Wetrich said. “I came in with a different attitude… My main thing was just coming back and try to provide this team with somebody that can be a force in the lineup and be consistent in the field and give us a chance to win day in and day out.”

The ups and downs Wetrich has experienced have even been present this season.

After Iowa’s series opener against Rutgers on April 5, he found himself with a .207 average, his lowest mark of the season. It was the result of a five-game hitless streak in late March that spanned the entire Illinois series, a midweek game against Clarke University, and the first Rutgers contest.

Despite facing problems in the box, Wetrich wasn’t fazed in the field. He has served as a solid wall between second and third base that hasn’t committed an error in the month of April.

“Tanner’s had his ups and downs with the bat the first half of the season,” Iowa head coach Rick Heller said. “He’s done a steady job at shortstop for us. That’s the thing I’m most proud of him right now: he didn’t let his hitting woes affect him in the field.”

All in all, it has been a solid season for someone tasked with the challenge of replacing Kyle Crowl, who finished last season with 6 home runs and was set to be one of Iowa’s top returning hitters.

Wetrich, though, stepped up when his team needed a solid presence on the lineup card and in the field.

“I was ready to take on that challenge,” Wetrich said.

What might be most exciting for Iowa is the fact Wetrich may have figured out the problem he previously dealt with.

Heller said his shortstop has been working to shorten his swing and make his swing as compact and direct to the ball as possible.

When Wetrich is successful, Heller said, it shows.

“When he does, you see the results,” Heller said. “He’s got tremendous power. He was just in a disconnect mode it seemed like. A self-defense-type mode that he couldn’t get himself out of.”

Like Wetrich has done this season, Iowa fought back on Tuesday. After surrendering 3 runs in the second inning, Iowa battled back the rest of the way, putting up multiple runs in three different innings.

The Hawkeyes had three players with multiple RBI, and Wetrich was one of them.

“Even if a team scores a couple runs early, we always feel that we’re never out of a game,” outfielder Ben Norman said.