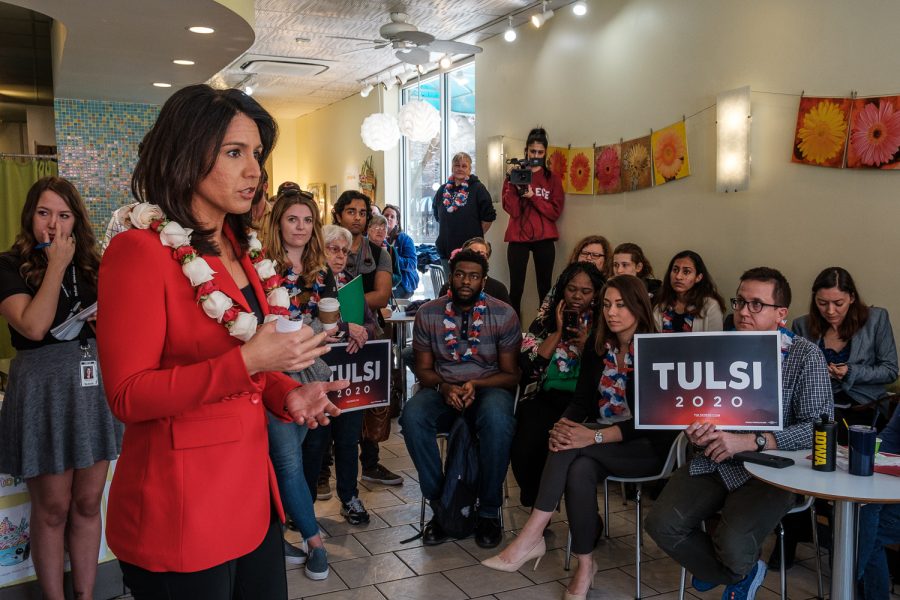 Rep. Tulsi Gabbard, D-Hawaii, speaks to the audience during a meet-and-greet at Yotopia in Iowa City on Tuesday, April 16, 2019. Attendees gathered to listen to Gabbard discuss topics such as defunding regime changing wars, environmental policies, and health care.

In her third visit to Iowa City since announcing her bid for the White House, 2020 presidential-nomination candidate Rep. Tulsi Gabbard, D-Hawaii, drew upon the grassroots nature of her campaign to call out what she called special interests and corruption in Washington.

“So many of these challenges we are confronted with every single day are really coming from, or being driven by, self-serving politicians, greedy corporations and special interest,” she said on Tuesday in front of a crowd of about 40 at Yotopia, the frozen yogurt shop in downtown Iowa City.

Gabbard pointed to a piece of legislation that would prevent the IRS from offering a free online tax-filing service, called the Taxpayers First Act. Gabbard said the bill was a bid by corporate tax-filing services to protect their interests.

“This is just one example of so many about how we are seeing these corporate interests who are driving the policies that are being made, who are paying to play,” she said.

Gabbard again spoke on her signature issue, calling for an end to regime-change wars.

As a member of the Hawaii National Guard and an Iraq War veteran, Gabbard has been outspoken against U.S. involvement in conflicts abroad, especially in conflicts that are focused on changing the government system in a foreign country.

Gabbard said this “peace dividend” that could be gained from the end of regime-change wars could go toward funding the progressive legislation and domestic programs that she promotes.

“People ask me why I talk about … the cost of war so much, when there are so many issues that we are dealing with in our everyday lives,” Gabbard said. “It is because unless we address this cost of war, unless we shift the priorities in this country, we will not have what we need to meet those needs that we have.”

Health care is one of the domestic issues that Gabbard puts at the forefront. She said she supports a Medicare-for-all system as a baseline, while allowing private insurance to be available for those who want it.

Gabbard also called for an end to private prisons and advocated for marijuana legalization. Such legalization could help address the opioid epidemic, she said.

“In states that have legalized either medical marijuana or adult-use marijuana, there has been a direct connection in the reduction of those who are addicted to opioids, as well as opioid-related deaths,” Gabbard said.

University of Iowa sophomore Ben Paulaitis, who studies political science, said he has been a fan of Gabbard since 2016, and she was his favorite candidate when it comes to addressing foreign-policy concerns. However, he said, he leans toward supporting Sens. Bernie Sanders, I-Vt., or Elizabeth Warren, D-Mass., because of their domestic-policy stances.

Yotopia owner Veronica Tessler said she was happy to host the event, and she shares a lot of similarities with the candidate. Tessler has worked in foreign policy, lived in Hawaii, and comes from a military background.

While Tessler hasn’t officially announced or confirmed her intention to run for office, there has been speculation that she may run for the seat that will be left vacant in Iowa’s 2nd Congressional District, because Rep. Dave Loebsack, D-Iowa, will not run for re-election in 2020.

“[I admire] her background in the military and her background serving this country, her expertise in foreign policy, and her understanding that we need a shift in Washington that takes money out of politics and puts people back in the center of our democracy,” Tessler said.