In honor of national prosthodontics awareness week, the department of prosthodontics within the UI College of Dentistry has gifted six veterans with free dentures. 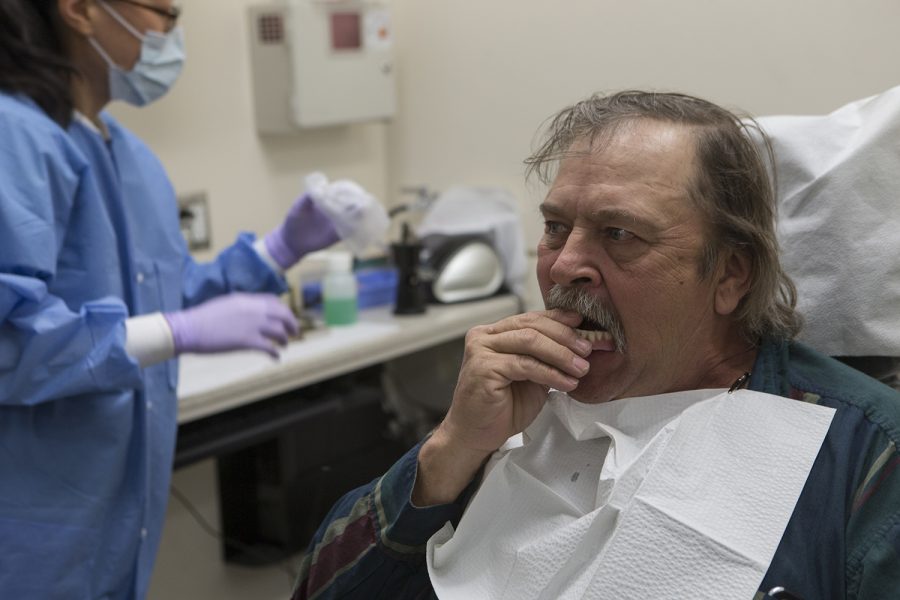 Steve Myers receives dentures from Dr. Hyunok Jo in the College of Denistry on April 11, 2019. The College of Dentistry has been giving free dentures to veterans in the community. A regular set of dentures is around $2500 and are typically not covered by dental insurance through the VA.

For National Prosthodontics Awareness Week, the University of Iowa College of Dentistry has recruited six veterans to give them fresh sets of dentures, free of cost.

When the project began, it was geared toward individuals who experienced homelessness. In the last three years, the college has shifted toward offering the service to veterans.

Kristen Flick, a social worker in the college, said her job focuses on finding the veterans who will use the services offered in National Prosthodontics Week.

“A lot of the participants I get come directly from the Veterans Association — social workers, nurses, and other health-care providers have veterans they work with,” Flick said. “I call that person and make sure they can be here.”

Flick said transportation, lodging, and food are not included in the program and is the responsibility of the person who is chosen. Another factor in choosing the recipients is the tissue surrounding the teeth being in a healthy state, she said.

“My least favorite part of this is turning people down,” Flick said. “They may not qualify, or it is full for the year.”

Flick said most participants are from the state of Iowa and between the ages of 55 and 75.

“In general, the population is pretty reliable for patients,” Flick said. “They are really good patients, because they show up and are respectful. It has been especially great for our faculty and staff to get involved to see that there is this population that has needs that are not being met, dental needs specifically. To be able to give them a resource because they have sacrificed so much is something we are happy to do to such a deserving population.”

A lot of veterans can’t afford or don’t qualify for dental care through the Veterans Association, she said. The Prosthodontics Department donates the services at around $2,500 for a set of dentures.

Butch Mattoon, a veteran serving in 1962-65 in the U.S. Army, said his care providers do not offer any dental coverage.

“It’s been really great,” he said. “Mine were breaking after about 15 years. Everybody out here has bent over backwards to help us. It’s wonderful that the university has stepped up to support veterans. I’m an old vet, and when you came home, they typically didn’t care about you. Within the last few years, they really have gotten behind the vets, and it’s nice to see them not forget the old ones.”

Matthew French, a third-year graduate fellow in the Prosthodontics Department, said residents do the program every year.

“The first year is tough to make a set of dentures in a week,” he said. “You know just enough of the lab work to do it, but it is a little more stress to do it in a week’s time.”

The opportunity to do a quick turnaround in a week has given the prosthodontics residents a way to show what they’ve got, French said.

“It’s very difficult to qualify for care,” he said. “A lot of people go untreated with their care.”

As French said this, Ray Felch, a U.S. Army veteran serving in 1975, chimed in to note his and French’s similarity in playing electric guitar.

Felch has had his previous dentures for 30 years. He served in the Vietnam War and said he financially could not afford dentures.

“This is a big deal to those who have served,” he said. “I almost feel like I don’t deserve it. It’s been amazing and these people are great. I am so thankful.”