Beto paired his energy with effective policy when he visited Iowa City last Sunday and proved to be a viable presidential candidate. 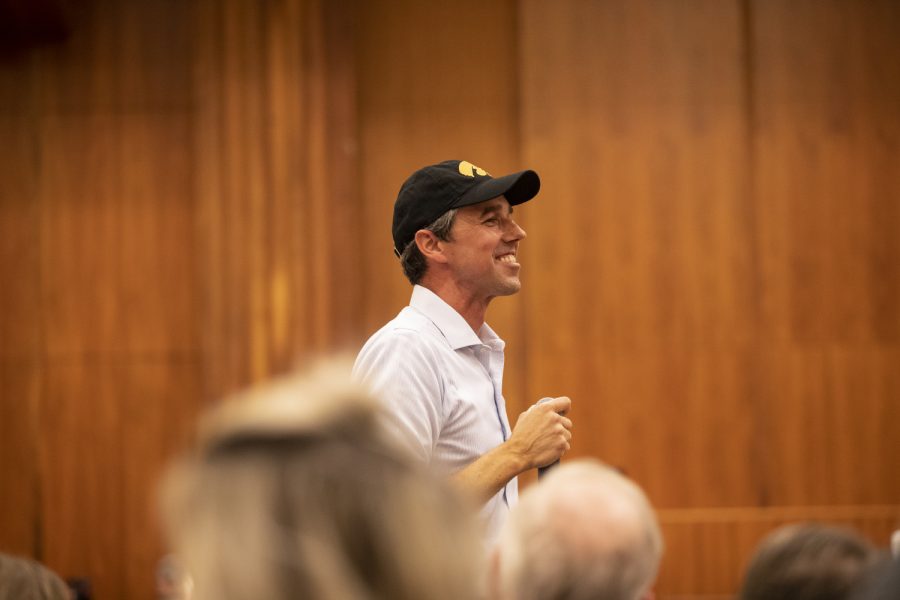 Beto O'Rourke smiles at supporters during his event in the Second Floor Ballroom of the IMU on April 7, 2019. O'Rourke will be running for the Democratic nomination for president.

When former Rep. Beto O’Rourke began his speech with a “Go Hawks” on Sunday, it was obvious that the presidential candidate was lively and personable. Of course, it was nice to see a politician express qualities that made him so relatable, but ultimately, I was more interested in the policies that he supports and wants to propose.

O’Rourke began an extensive monologue on immigration policy when he stated, “we should suspend disbelief when it comes to this president,” after President Trump declared that our country is full, on April 5. O’Rourke suggested that we should empathize with immigrants when addressing our immigration our system. “What would compel you to put your 6-year-old in the hands of a smuggler … they have no other choice,” O’Rourke said.

Climate change was another area that O’Rourke made a point to address after the recent flooding across the Midwest. He said farmers are paying the price for climate change and its consequences in the midst of a trade war. O’Rourke expressed his support for the farm bill, which should “bring all of America together around this challenge” so that farmers are not the only ones who bear the burden of climate change and environmental damage.

With outcomes that will affect every person on Earth, climate change must be a bipartisan priority on the political agenda. O’Rourke’s proposal to invest in renewable energy and solar technology is certainly an option that lawmakers must consider as climate change intensifies. The human lives that will continue to be affected by climate change are so much more important than any financial burden that policy initiatives might create. Anyone can agree with O’Rourke’s stance that we must “fulfill our obligations to the next generation.”

Toward the end of his speech, O’Rourke proposed that community college should be free for anyone who wants to attend and that university students should be able to get a degree without taking debt home. In contrast to the ideas of O’Rourke and many others running for the Democratic nomination, I think structural and social changes need to be identified and challenged as student-loan debt increases, more so than tuition cost, so that the demand for a college degree is not as high.

Along with the federal government, employers and potential college students are key actors in a student-debt solution. If more employers use a variety of ways to determine skill levels in potential employees, people looking to join the workforce would see college as less of an obligation. Reducing the stigma around options outside of higher education is a step toward reducing student debt, because other sources of training and experience can be used as qualifications for job applicants. Ultimately, finding information and thinking through the legitimate costs and benefits of a college degree can save many people from going into student debt and still attain high-paying jobs, which would indirectly lower the national loan debt.

O’Rourke’s campaign is a great one to back during a race filled to the brim with Democratic candidates. While he fights for progressive reform on numerous qualifying policies, he also feels strongly about strengthening American democracy by eliminating the political divide. “We must resist the temptation to be divided by our differences,” O’Rourke said. Directly applying to the current political climate, this element of the O’Rourke campaign is imperative in order to achieve any change in our political institutions and programs during the next presidential term.