Iowa softball is relying on fundamentals to exit its nine-game losing streak. 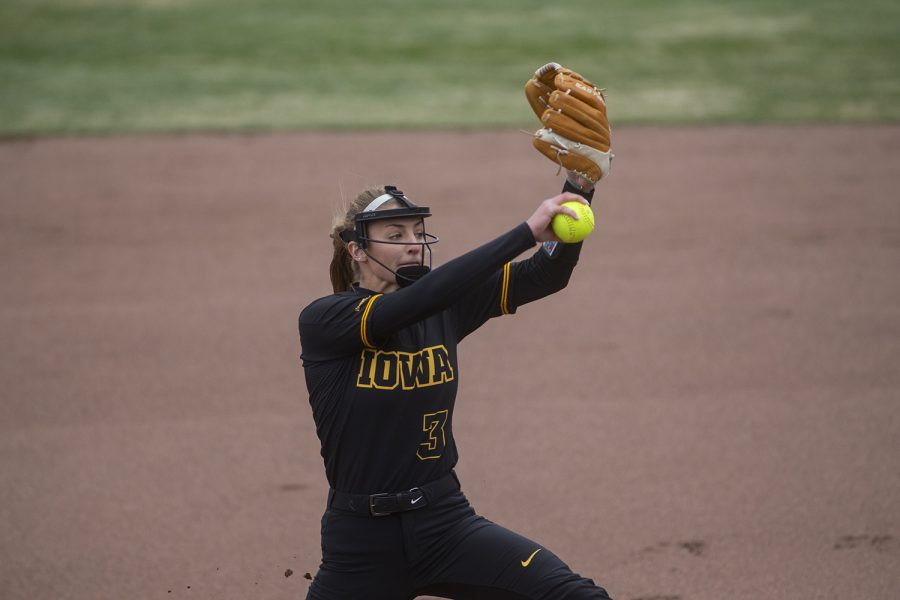 Pitcher Allison Doocy winds up to throw the first pitch during softball against Northwestern on Bob Pearl Field on March 30, 2019.

Sometimes a team just needs to focus on fundamentals, and that’s what Hawkeye softball head coach Renee Gillispie stresses to her players.

A nine-game losing streak is hard for any squad. But it’s especially difficult when it’s accentuated by poor fundamental play. While the Hawkeyes have only scored 5 runs in its last seven outings, errors and poor communication among fielders have been a hindrance, Gillispie said.

It’s hard to control when or where offensive slumps happen, but it’s quite easy to control the small things. Simple concepts, such as relay throws, have been noticeably lacking in recent weeks.

“We worked a lot on our relays in the outfield, and they’ve done better,” Gillispie said. “We just have to continue getting stronger and better with that. Making sure we’re communicating better between infielders and outfielders.”

Cleaning up things such as this make it easier for pitchers to post quality outings. Iowa ace pitcher Allison Doocy gave up 4 earned runs in each of her two performances against Wisconsin. Errors and poor relays were paired with the Badgers’ strong hitting, which made it that much more difficult for Doocy to stay comfortable in the circle.

Gillispie said pitching and defending are strongly linked, and it’s important to focus on them both in tandem to win games down the stretch.

Tuesday’s loss to Iowa State showed much improvement in both of those categories. The Hawkeyes didn’t commit any errors, and Doocy posted a complete outing alllowinig only 2 earned runs. That’s much better than last weekend, in which Iowa found a way to commit more errors than it scored runs.

Even though Iowa was shut out in the loss, hitters were getting better looks at the plate. Only 2 hits came for Iowa in the game, but only three Hawkeyes struck out. Gillispie said the team is hitting the ball hard, which bodes well for the offense to get going in the future. This, she says, is a motivating factor for whoever is in the circle.

“[Doocy] saw the offense coming in, she saw the girls at the plate for her,” Gillispie said after the loss to Iowa State. “That’s part of it. We have to keep fighting for each other.”

Offensive slumps end, and this one surely will. For now, it’s a great opportunity to clean up small things in the team’s play.

Another high-quality opponent will face Iowa this weekend in Illinois. Because Iowa is still in the hunt for its first win at home, it will capitalize on progress made in the loss to Iowa State. This soul-searching slate of games in which the Hawkeyes are bettering their fundamentals and communication will certainly pay dividends in the future.