Mar’Yea Harris and Brianna Guillory came into the Iowa program four years ago, and now they are the leaders of some of the most impressive sprinting groups in the nation. 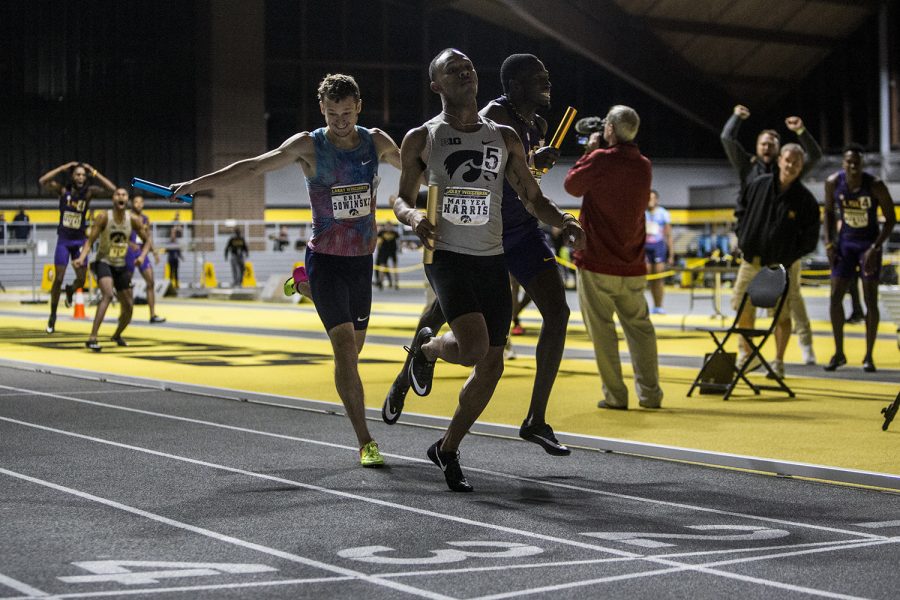 Iowa's Mar'yea Harris crosses the finish line during the 4x400 meter relay during the Larry Wieczorek Invitational on Saturday, Jan. 20, 2017.

Four years ago, Mar’Yea Harris and Brianna Guillory made their first contributions to the Iowa track and field program. Harris and Guillory — now senior sprinters — became Hawkeyes at a time when both sprinting groups needed new life.

The pair brought that new life to the team, and then some.

“Compared to where we were at four years ago when he got here, our 400 program needed a spark,” Iowa Director of Track & Field Joey Woody said. “They were the right people to do that. Mar’Yea and Brianna brought the spark and took our 400 program to a whole new level.”

That spark that Woody wanted is now a burning flame; Harris and Guillory have become greats in the program.

Harris and Guillory are both eight-time All-Americans and three-time Big Ten champions. Both earned Outstanding Freshman honors in their first year at Iowa. And in an almost absurd coincidence, both have been on 19 relays that rank in the top-10 all-time at Iowa.

Harris said before last indoor season that he wanted to get the Iowa program on the map.

“I feel like we are very underrated and underappreciated despite having a lot of talent,” he said. “Just being able to get the program on the map and get some more recognition would be good.”

The recognition has been coming more frequently, which makes sense, because Iowa keeps putting up noteworthy performances.

Just this past week, FloTrack pointed out on Twitter how only one program has numerous runners under 46 seconds in the 400 meters. It’s the Iowa men, with three.

Alongside Harris are Karayme Bartley and Wayne Lawrence, rounding out a deep 400 program. An event group as deep as this one is rare, and it’s only possible when someone such as Harris leads the way.

“Mar’Yea and what he’s done for the men’s team, breaking numerous school records both indoor and outdoor, just the significance he’s had, has changed our program,” Woody said. “Not only in that event group, which he has taken to an entirely new level, but for our entire team. He’s a guy that people really gather around, he’s a guy who has helped lead our program to where it is right now.”

What Harris has accomplished on the men’s side has been mirrored by Guillory on the women’s side.

“Brianna has had a similar impact as Mar’Yea,” Woody said. “Just coming in and taking that event group to a whole new level. She has been a huge contributor to our women’s team. I know she will be trying to carry as big a load as possible when we get to Big Tens to help the women’s team win.”

Guillory leads the Big Ten women in the 400, and Woody is confident, for good reason, that she will do her part at Big Tens.

“I just try to do what I can for the team,” Guillory said. “Whatever it takes, I just want to go out there and score points for the team so we can walk away with a Big Ten championship.”

Harris and Guillory sparked a fire at Iowa from the moment they arrived and have done their part to elevate the sprint group to national contention.

When the Big Tens come to Iowa City in May, they’ll be sprinting to the finish line, as usual.