Bats wanted in loss to Bradley

Iowa’s pitchers looked sharp, but its bats just could not gain traction against Bradley on Wednesday. 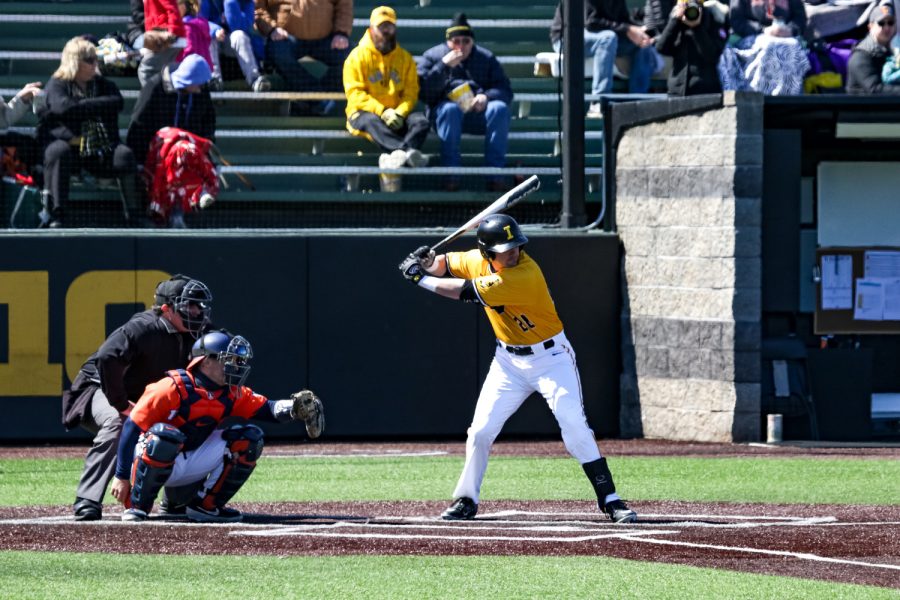 Iowa's Chris Whelan stands in the batters box during a baseball game against the University of Illinois on Sunday, Mar. 31, 2019. The Hawkeyes defeated the Illini 3-1.

The Hawkeye pitchers did their fair share in keeping the score close; the first three Iowa arms didn’t allow a single hit. The bats, however, couldn’t muster much of anything, especially against Bradley starter Ben Cilano.

Cilano threw for the game’s first five innings, and the Hawkeyes only recorded a pair of hits during his time. The right-handed pitcher also struck out four Iowa batters without walking any member of the Black and Gold. This season, Cilano has 13.1 innings under his belt. He’s struck out 14 batters and allowed just 5 hits.

For the Hawkeyes, Trenton Wallace notched his third start of the year. In his single inning on the mound, he struck out a batter and walked another.

Clayton Nettleton, Adam Ketelsen, and Jason Foster were the next three pitchers, and, along with Wallace, the group held Bradley scoreless.

It wasn’t until Kyle Shimp took the mound when the Braves broke into the scoring column.

With Keaton Rice on third, Bradley teammate Christian Dominguez bunted to the pitcher, brining in the game’s first run.

In the following inning, Bradley added another run on the board. Rice reached first on a fielder’s choice, and that left Dan Bolt to cross home plate, bringing the Brave lead to 2-0.

Iowa attempted to answer in the top of the seventh inning, though.

Brett McCleary singled to right field, advancing Mitchell Boe to second base. Thanks to a throwing error on Izaya Fullard’s ensuing at-bat, the Hawkeyes plated Boe, cutting the deficit to a single run.

But that was it for Iowa’s offense. The Hawkeyes would not score another run in the remaining innings.

Bradley added one more run for good measure in the bottom of the eighth when Dominguez singled to right-center field, scoring Rice once again.

Thus, Iowa’s road record dipped to 5-9 on the season.

Offensively, Iowa recorded just 4 hits. Chris Whelan was half of the Hawkeye offense, notching a pair of hits. McCleary and Tanner Wetrich each had a hit of their own. The Hawkeyes left five runners on base on Wednesday as well.

The Hawkeyes need an offensive boost, especially with Big Ten play heating up. In five of their last eight games, Iowa’s scored fewer than 5 runs, including a combined 4 runs in the past two losses.

The road games continue for the Hawkeyes once they return from Peoria. After a few days back in Iowa City, Iowa travels to West Lafayette, Indiana, for a three-game weekend series against Purdue. The last time these programs clashed was in 2017. Iowa took two of the teams’ three meetings, winning 5-1 and 7-2, respectively.