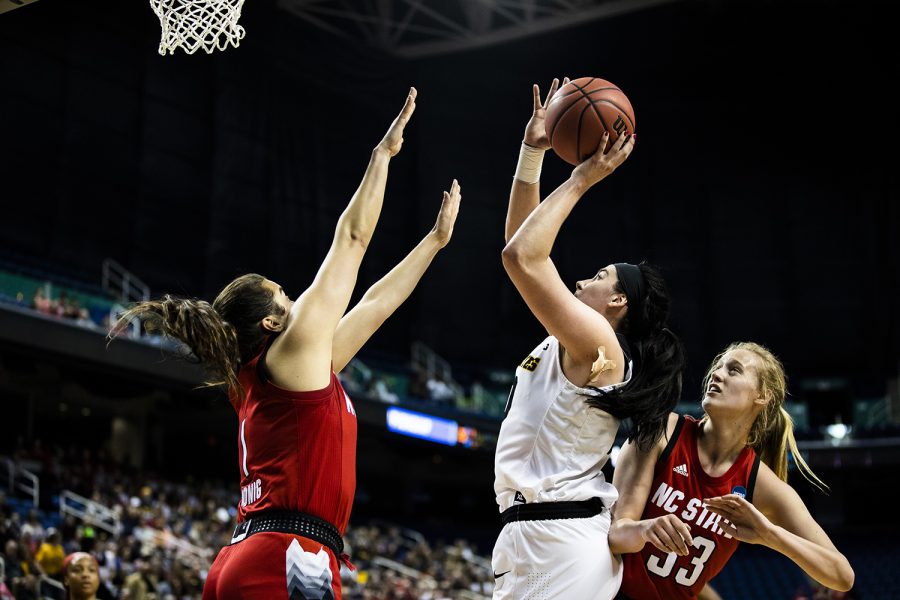 As Megan Gustafson gets set for the WNBA draft Wednesday night after her stellar Hawkeye career, The Daily Iowan takes a look at the new Mount Rushmore of Iowa basketball.

It’s admittedly hard to rank players from different time periods and positions, let alone gender, so the list isn’t in any order and deliberately picks two women and two men.

Marble played for the Hawkeyes in 1985-89 and is the all-time leading scorer for the men, finishing his career with 2,116 points.

Steals were also a big part of the shooting guard’s game — he is fourth in Iowa history with 183 steals. When he left school, he led in both scoring and steals.

During Marble’s stay at Iowa, he was a part of some incredibly successful Hawkeye teams that made the NCAA Tournament every year he wore the Black and Gold.

He was a big part of Iowa’s Elite Eight run in 1987, when the Hawkeyes amassed a 30-5 record and finished third in the Big Ten.

Overall, Iowa was 97-37 during Marble’s time as a Hawkeye. It hasn’t had a better four-year stretch since then.

Another interesting note on Marble is his son, Devyn Marble, who also played for Iowa. They were the first father-son duo in Big Ten history to each score 1,000 career points.

Deciding between Logic and Cindy Haugejorde was an extremely tough decision. Haugejorde was the Gustafson of the late 1970s, and she is second in Hawkeye history in rebounds (1,067), third in points (2,059).

However, there wasn’t much — if anything — Logic couldn’t do on a basketball court. She was the ultimate triple-double threat, totaling six of them in her career.

Just how impressive is that stat? Well, there have only been nine triple-doubles in the history of Iowa women’s basketball.

She was also a major part of the last Hawkeye team to make the Sweet 16 before this past season.

No Hawkeye has played more games than White, who played in 140-consecutive games in his Hawkeye career.

More importantly, he was a major factor in helping head coach Fran McCaffery turn around the Iowa basketball program. Prior to White putting on the Black and Gold, Iowa had suffered five-consecutive years without even an NIT appearance and a 66-91 record.

Iowa’s years of squalor turned around the first year White stepped onto the Carver-Hawkeye floor. White put up 11.1 points per game along with 5.7 rebounds as a freshman to help Iowa to the NIT.

When White hung up his Black and Gold jersey for the last time, he had helped lead Iowa to an NIT runner-up and two-straight NCAA Tournament appearances.

Last and probably the best player out of this group is, of course, the 6-3 post player from Port Wing, Wisconsin.

Head coach Lisa Bluder often described how tough it was to even describe Gustafson anymore during Iowa’s tournament run.

And really, what more can be said about her?

Of course, with all the records and awards, her most impressive trait was her unbelievable humility that can never be overstated.