The Hawkeye offensive line and running backs take center stage as Iowa looks to make progress in the running game. 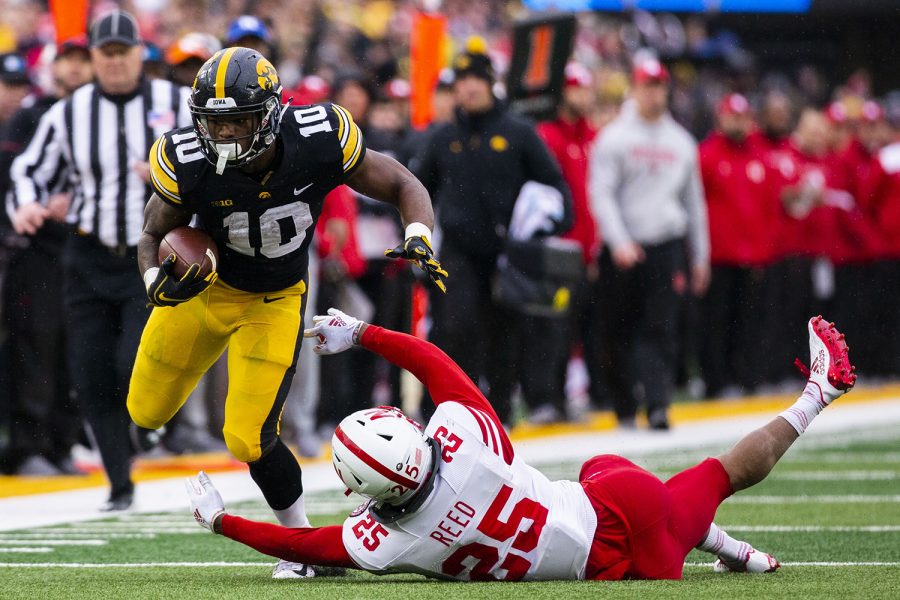 A productive offensive line has been a staple of Iowa football for as long has Kirk Ferentz has been at the helm.

With Ferentz being the Dean of College Football and the longest-tenured coach in the country, that’s a long time.

The past two seasons, though, the line didn’t quite look like itself.

Some of the drop off can be attributed to the running backs; Iowa entered 2018 without a go-to starter with three different backs accepting the role throughout the seasom.

But some of it was because of the line. After winning the Joe Moore Award – an honor given to the best offensive line in college football – in 2016, the unit hasn’t found its way back to the top.

“Those guys do a great job every day at practice; some plays we mess up and some plays [the tackles] mess up,” running back Mekhi Sargent said. “But at the end of the day, we’re cheering each other on.”

Iowa is hoping Tyler Linderbaum can help get the line back on track to its ways of dominance.

Linderbaum, a former three-star prospect at defensive tackle who played in the U.S. Army All-American Game, switched to the other side of the ball shortly before the Hawkeyes’ Outback Bowl victory over Mississippi State.

Although he’s new to the position and was listed as the backup center when spring ball began, offensive line coach Tim Polasek has been impressed with the sophomore so far.

The situation in the backfield will play a role in the improvement of the ground attack as well. Entering the season, Iowa seemingly has a No. 1 starter set for the long haul in junior Mekhi Sargent, who took over the role toward the end of last season.

The Iowa Western transfer ran for 294 yards and 3 touchdowns in Iowa’s last two games of the season, and despite not starting all season, ranked seventh in the Big Ten with 9 rushing touchdowns.

With Sargent, Toren Young, and Ivory Kelly-Martin coming back with more experience, it would make sense for the ground attack to take a step forward this season.

“At the end of the day, there’s still work to be done,” running backs’ coach Derrick Foster said. “You can never not do enough.”