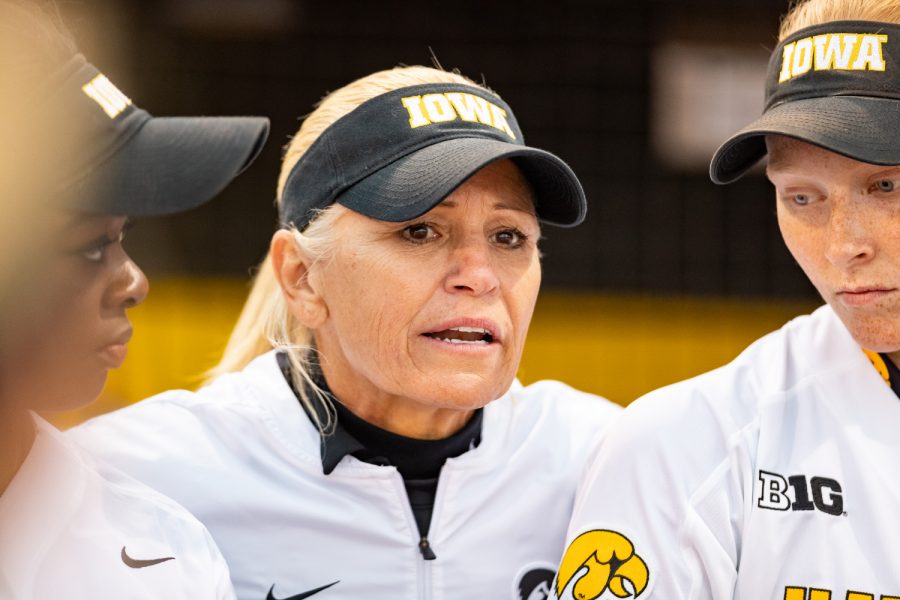 Iowa Softball Head Coach Renee Gillispie talks to her team before a softball game against Western Illinois on Wednesday, Mar. 27, 2019. The Fighting Leathernecks defeated the Hawkeyes 10-1.

Because of Wednesday weather concerns, the Iowa softball game against Iowa State will be played tonight at Pearl Field.

The Hawkeyes are on an eight-game skid, so the team looks to re-enter the victory column against the Cyclones. The team is also winless at Pearl Field this season, having been swept by Northwestern and losing to Western Illinois.

The Hawkeye offense has struggled during the winless streak. In last weekend’s series sweep by Wisconsin, Iowa scored only 3 runs, which paled in comparison to the fiery Wisconsin offense, which scored 21 runs.

Iowa head coach Renee Gillispie said after the team’s loss to Wisconsin on Sunday that she is happy with the at-bats the team is getting, but she’s concerned with bettering situational play.

“We are working on bunts a bit,” she said. “We had two situations where we got the lead runner out on a bunt, so we have to clean that up. We gave that game away today, and I feel we had the opportunities to win.”

Even more than bunting, Iowa has missed other opportunities in recent games. In the loss to Wisconsin on April 5, hits from junior Havyn Monteer and sophomore Aralee Bogar loaded the bases in the third inning. But Iowa was not able to convert in one of its only opportunities of the game, leading to a Badger shutout.

Despite being drastically outscored over the weekend, the last matchup was promising for Iowa despite some missed opportunities. The team knocked 8 hits in the game, led by freshman Hallie Ketcham, who went 2-for-3 in filling the 2-hole in the lineup. Many of Iowa’s bigger hitters have been quiet in the losing streak, so Gillispie said she is happy with Ketcham’s looks.

“Ketcham had a great day in the 2-spot,” Gillispie said. “We are always looking for somebody who can fill that spot in the order, and she locked that in for us today.”

If the offense experiences an upswing, Iowa hopes to grab a win tonight against Iowa State. The Cyclones, though, are in the midst of a four-game winning streak in which they have outscored opponents 27-8.

The team’s leading hitter, Sami Williams, has been formidable at the plate. The junior infielder is batting .398 with a whopping 49 hits this season, while also clubbing 10 home runs and 14 doubles. Iowa’s pitching staff, which struggled greatly against Wisconsin last weekend, will have its hands full with a stacked Cyclone lineup.

Rough games and stretches are made even rougher when easily available runs are left off the board. Softball is still a team game, and manufacturing runs is something the young squad needs to improve.