After an underwhelming performance at the Big Ten Championships, Iowa men’s gymnastics turns to a new focus as the NCAA Championships approaches. 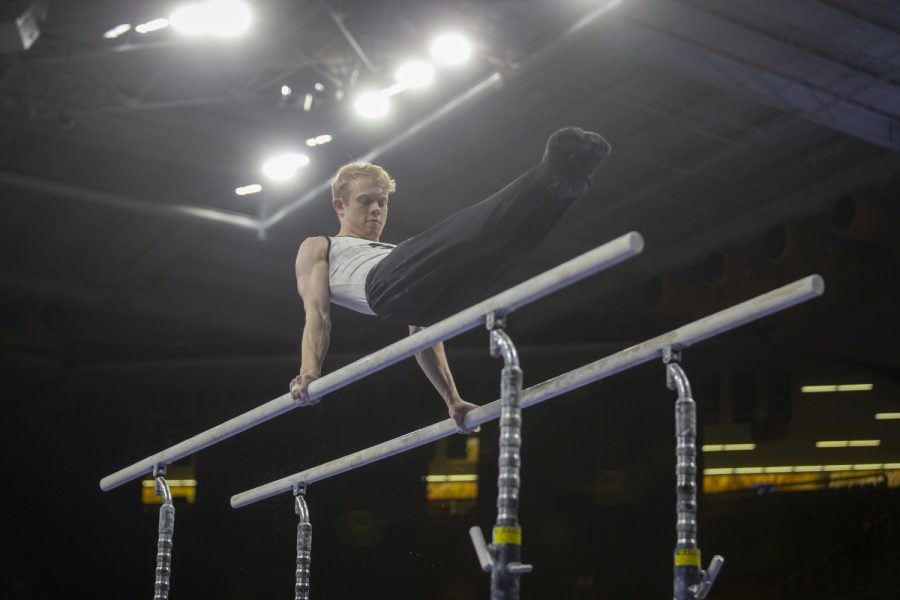 Nick Merryman gets ready to compete on the parallel bars during day two of the Big Ten Men's Gymnastics Championships in Carver-Hawkeye Arena on April 6, 2019. Gymnasts competed in individual competitions. Merryman placed 36th overall with a score of 13.600 on the parallel bars.

Among a pool of home nerves, getting too comfortable, and high expectations, the men’s gymnastic Hawkeyes didn’t perform as well as they had hoped at the Big Ten Championships.

The Hawkeyes won the regular season Big Ten title but fell into last place in the tournament.

The gymnasts were less than satisfied with the results, and head coach JD Reive said the underwhelming performance could have been the result of the nerves that come along with hosting the tournament and the Hawkeyes getting used to being an up-and-coming program.

“We were obviously super disappointed from [April 6]; that was not what we were intending to do in any way,” he said. “I think the home nerves, the expectations [influenced the performance]. Obviously, it’s something new for us to be a good team and try to get out there, and that’s just something we have to learn as we get better as a program.”

Stewart Brown, a second-team All-Big Ten  member and third-place finisher on the vault, thought the faults came on the mental side.

“I think it’s just our mindset going in,” he said. “I think we got a little comfortable with how well we had done. We had just come off with the regular-season title, and we knew there were a lot of teams here with high difficulty, and we were on the lower end of that spectrum, so we knew that we needed to hit if we wanted to beat them. I think we got caught up in trying to be too perfect, and it just got to us.”

Senior Jake Brodarzon agreed that focusing on trying to be too perfect was a major cause of the Hawkeye finish.

Iowa was too concentrated on trying to nail every single event and wanting to go 30-for-30 — perfect on every set — rather than compete in the moment.

“We were all really, really upset [after April 6’s performance],” Brodarzon said. “But like our coach JD said, we have to own it. At the end of the day, that is what is what we did, that is what we put out there, and the biggest thing that we confirmed on was that we got way too ahead of ourselves. We were so focused on 30-for-30.”

But this is in the past now, and the Hawkeyes look toward the final competition of the season: the NCAA Championships.

The Hawkeyes plan to go into NCAAs with a clear mindset and a new focus: enjoying the moment and the process.