The 10th Walk it Out: Multicultural Fashion Show celebrated different cultural groups on April 6 with performances of traditional and modern dance in customary clothing. 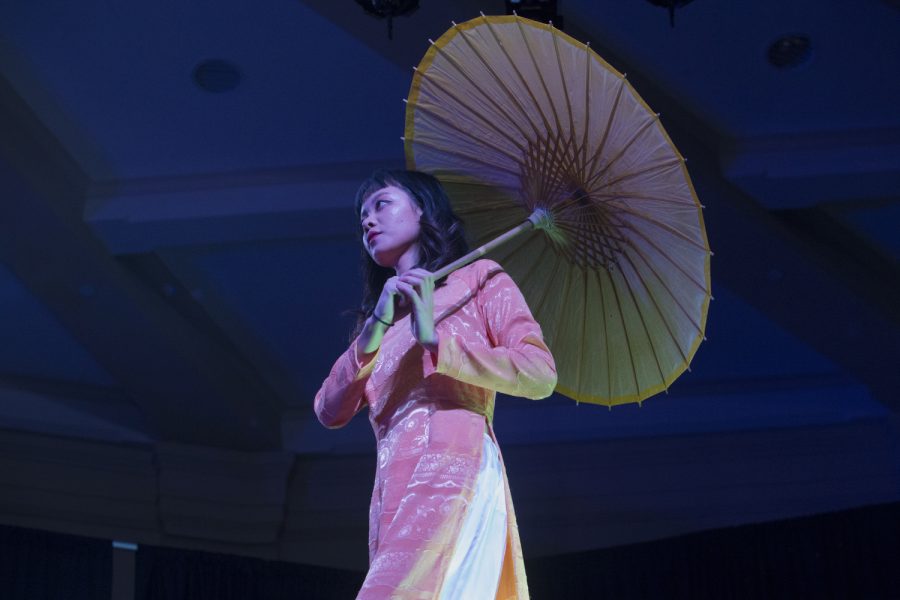 A University of Iowa student represents Southeast Asia during the Walk It Out Fashion Show at the IMU Main Lounge on Saturday, April 6, 2019. (Jenna Galligan/The Daily Iowan)

Walk it Out: Multicultural Fashion Show took its audience around the globe on April 6, beginning in Latin America and ending in the Middle East. With drums beating, skirts twirling, and flags waving, models, and MCs heralded in the organization’s 10th anniversary.

Established in 2009 by an alliance of different cultural groups on campus, Walk it Out included a series of performances that had different regions and communities to represent their traditional and modernized style, song, and dance.

“I think it’s really cool to see all the different cultures together and how proud everyone is to represent their identities,” said Ravjot Virdi, a Walk it Out executive board member and sound producer. “It’s a very good show, I think, because of that.”

Virdi said this was her second year of participating in Walk it Out, and she was really excited about having another good show. In addition, she was eager to spread awareness of not only cultural identity but also HIV/AIDS. The organization donated proceeds toward the fight against the disease.

“I think it’s important to educate others on your identity and spread more awareness,” Virdi said. “I feel like equality in general is based on the more awareness and education there is.”

While Walk it Out advertises fashion, the show itself extended far beyond the colorful patterns and tailored suits many of the models wore. The models also danced solo, in pairs, with fans, and with wings.

Each cultural group accompanied its performance with visual media. The East and Southeast Asia group shared names and photos of their performers’ native countries, while the LGBTQ+ group performed around videos showing the evolution of the gay-rights movement.

“I like seeing the other groups, especially when my friends are in [them],” UI freshman and Walk it Out performer Ann Thomas said. “It’s really fun to be able to support their cultures and their backgrounds.”

Thomas said she was encouraged to join Walk it Out by a friend who was also the group leader of South Asia, in which Thomas received a spot.

“I really like South Asian dance,” Thomas said. “So I wanted to get more involved on campus.”

Although performers modeled traditional styles and customs of their respective cultures, each group also added modern styles of music and dance and fashion. For example, several models in the Africa performance acted out the “Wakanda Forever” symbol from the movie Black Panther.

With a line from the entrance to the performance space extending all the way to the IMU south entrance, Walk it Out nearly had a full house for its anniversary performance. The large audience likely stems from an increase in the number of performers in several of the cultural groups, Walk it Out President Shemaa Dafalla said.

“It has absolutely grown in number,” Dafalla said. “Not just the cultural performers but people in general, people who are interested in learning what we do, our focus, our goals.”

Having been an audience member, a group leader, and a member of the executive board, Dafalla said, Walk it Out has been a source of joy for her over the last three years. After a whole year of planning, however, she said, she always walks off the stage ready to do it again.

“The process starts in April,” she said. “It’s a yearlong process of weekly meetings and weekly practices. Every time, a lot of work goes in it.”

There is consistent room for success in every student organization or event, she said, and she would like to see even more community support of Walk it Out in the future.

“I feel it has grown so much,” Dafalla said. “I don’t know how I could actually imagine it growing more than we already [have].”