Megan Gustafson has racked up awards all season, but this Naismith Award is something different. 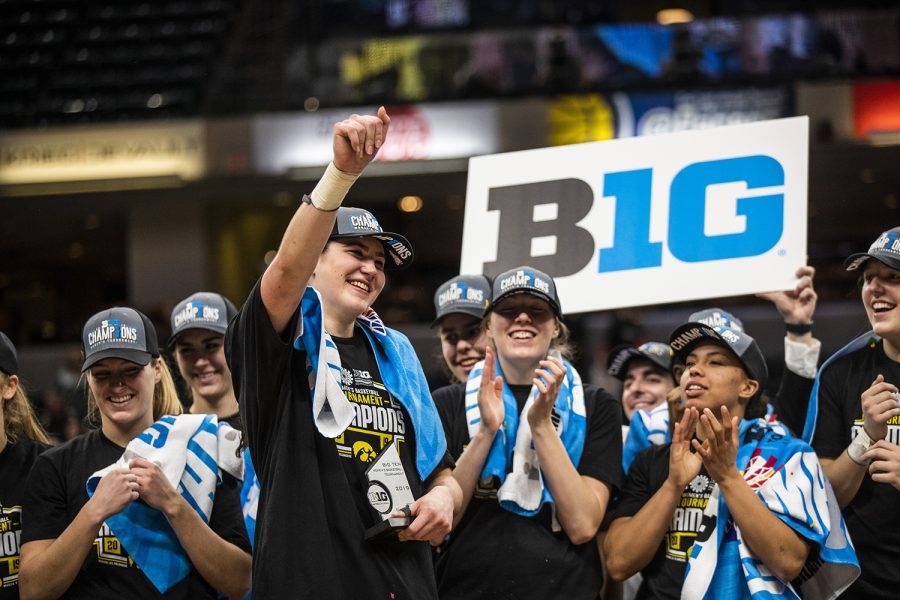 Iowa center Megan Gustafson celebrates after the women's Big Ten Championship basketball game vs. Maryland at Bankers Life Fieldhouse on Sunday, March 10, 2019. The Hawkeyes defeated the Terrapins 90-76 and are the Big Ten champions.

Most of the Iowa women’s basketball team has been in Iowa City since the season ended last week in a crushing defeat to No. 1 Baylor, but Megan Gustafson and Lisa Bluder traveled to Tampa — the site of the women’s Final Four — for a few award press conferences and banquets.

While that loss ended the chances of Iowa taking home its first ever national championship, it brought home several different national awards thanks to Megan Gustafson.

Her trophy case began the weekend already fully loaded with her honors and awards from her first three years at Iowa and her awards from earlier in the season, which includes being named Big Ten Player of the Year by the media and coaches, Big Ten Tournament MVP, and ESPNW’s Player of the Year.

By the end of the weekend, Gustafson is probably in need of a new trophy case after taking home some of the most prestigious awards in women’s college basketball.

But of course, part of what makes Gustafson so special is her unbelievably selfless nature, so, naturally, these awards weren’t just for her.

“This experience is incredible,” Gustafson told Hawkeye Sports. “It’s a great way to wrap up my career at Iowa. I couldn’t be more blessed to accept these awards on behalf of the University of Iowa, on behalf of my team. I’m just excited to see what the future holds.”

While Gustafson refuses to offer herself any praise, it wasn’t needed, as a few members of what Iowa head coach called “the Mount Rushmore of women’s basketball” did that for her.

“It’s not just about offense,” said former UCLA standout  Ann Meyers Drysdale before presenting Gustafson with the Player of the Year award. “It’s about team and it’s about defense also. I think that proved with how far [Iowa] went in the NCAA Tournament. A lot of that was on Megan’s shoulders.”

Lisa Leslie, the eponym for the award given to the best center in women’s college basketball, was most impressed with her fundamentals and efficiency.

“When it came to Megan, I thought she was really outstanding in terms of footwork, her posting up, how she was able to get the ball and how she made others better,” Leslie said. “Just even watching her dominate inside and her ability to finish. I just thought she was super efficient, and I’m all about numbers and efficiency. She couldn’t be denied [the award].”

For Bluder, Gustafson’s shower of awards stems from something much more than sheer talent.

Gustafson getting bombarded with National Player of the Year awards certainly is a great way to close out a phenomenal season and a magnificent career.

However, none of the big-name awards Gustafson earned over the weekend better embody what her legacy at Iowa should be than when she received the 2018-19 Senior CLASS Award.

The Senior CLASS award focuses on the total student-athlete and encourages students to use their platform as athletes to make a positive effect as leaders in their communities.

To be eligible for the award, a student-athlete must be classified as an NCAA Division-1 senior and have notable achievements in four areas of excellence: classroom, community, character and competition.

Gustafson certainly possesses the qualifications to win that award 10 times over, but one will have to do.