As Jake Brodarzon’s time as a Hawkeye comes to an end, he turns his focus to the future: medical school. 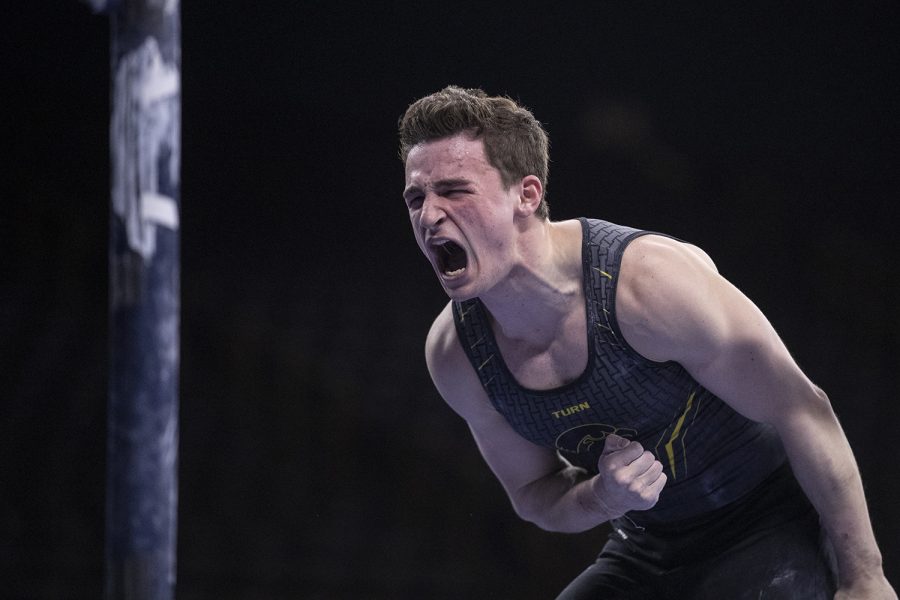 Anyone who watches the Iowa men’s gymnastics team perform can see the energy Jake Brodarzon brings to the table.

“I think he’s one of the reasons we kind of stayed a little bit together yesterday,” freshman Stewart Brown said. “It just seemed like every time we got back on our feet, something else would happen. But Jake was always the first one to be yelling and getting us back to our feet.

“Jake is definitely the most energetic guy on the team. It doesn’t matter if he has a bad set or a great set — either way, you’re going to get the same reaction from him, which is an awesome thing to have as a gymnast, something I struggle with. Just having someone like him on the team, it doesn’t matter how the team is doing, he’s always there to bring them up.”

Not only does the senior bring liveliness to the Hawkeye squad, he also brings skill. Brodarzon was one of three Hawkeyes who automatically qualified for an individual event on April 6 after setting a career-high on the still rings (14.550).

Despite lowering his score to 14.300 after the April 6 performance, Brodarzon still finished fourth overall on the rings in his last performance in Carver-Hawkeye.

“Honestly, it’s crazy. It still hasn’t sunk in that is really my last meet in Carver,” Brodarzon said. “I mean, my last performance, I couldn’t have asked for anything more.”

As his time on the gymnastics team at Iowa comes to a close, the upbeat senior has had a chance to reflect on what he’s learned through the program.

“Being on the gymnastics team here has really just taught me the value of hard work and really just learning how to, when the time comes, not stress about all the reasons it should go wrong or it should go right,” Brodarzon said. “But just going out there and having fun, because it’s such a short time that you have here, so it’d be a shame not to enjoy every second of what you’re doing.”

So what’s next for this senior?

After he finishes his last season on the mat at the NCAA Championships on April 18-19, Brodarzon will graduate with a degree in human physiology. He plans to take a gap year and is applying to be a medical scribe in New York this summer. He will also apply for medical school.

“After graduation, I am currently applying for medical school, so I’m really excited — applications don’t open until later, so I’m in the process of drafting a bunch of my stuff,” Brodarzon said. “But because I’m taking a gap year, I’m applying to be a medical scribe in New York City because that’s where I’m from.”