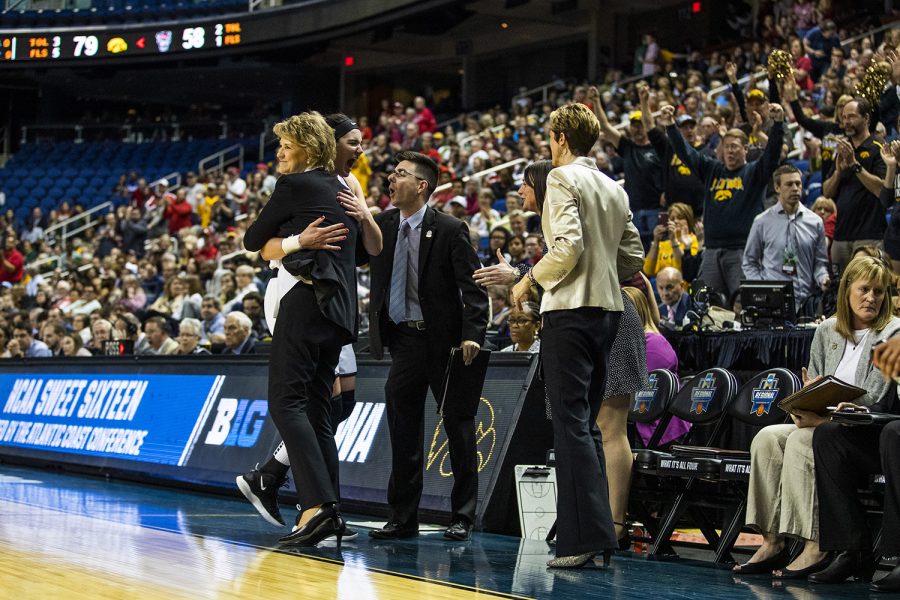 Iowa center Megan Gustafson hugs head coach Lisa Bluder after the win against NC State in the NCAA Sweet 16 game at the Greensboro Coliseum Complex on Saturday, March 30, 2019. The Hawkeyes defeated the Wolfpack 79-61.

Iowa women’s basketball head coach Lisa Bluder won the Naismith College Coach of the Year award this past weekend, capping the most successful year of her career.

She is the first Iowa head coach to win the award since C. Vivian Stringer in 1993.

Whether intended or not, Bluder’s win means a lot to the sport on the national level. Women’s college basketball has faced a lot of scrutiny in recent years, and because she’s only the third coach since 2012 not named Geno Auriemma or Muffet McGraw to win the award, Bluder will now be a national figure and spokesperson for the sport.

At a Final Four press conference on April 6, eight-time Naismith Coach of the Year winner Auriemma talked about the status of the sport as a whole. When a reporter asked a disconcerting question about Auriemma being “married” to Notre Dame coach McGraw, Auriemma responded that the media and the country should respect women’s basketball in its own right as a sport rather than trivialize it.

Bluder won the award for several reasons: This year’s 29-win season — highlighted by a Big Ten Tournament championship —  was the best of her career. But sustained excellence also played a part; in 19 seasons as the head coach at Iowa, she has led the program to a 20-win season 12 times.

But Bluder’s subjective meaning to the sport are cause for just as much celebration. Auriemma’s comments ahead of the Final Four could have been a campaign speech for Bluder: She is intent on bettering her team, both as people and as basketball players, and does so in a respectful and understated way. This is an idea that has been stated and restated by nearly all of the players Bluder has coached.

“Coach Bluder said last week, ‘I hope I’ve prepared them for the world like they’re my daughters,’ ” senior Hannah Stewart said after the team’s win over Northwestern on March 3. “I [can] attest to the fact that she’s done that, if not more. She’s taught me so many life lessons, not only about what it means to be a good basketball player but a strong woman.”

Gustafson is a big part of the success this year’s Iowa team had. She is known to be team-minded and humble, constantly being confronted by fans and media members listing her stats and awards. Inevitably, she diverts the attention back to her team.

Bluder isn’t confronted by these things as much because the effect a coach has is largely intangible. But when she finally was asked a question about her accomplishments ahead of the NCAA Tournament, Bluder showed the same respect and attitude shown by her All-American.

“It’d be an honor, the Naismith is one of the most prestigious awards in college basketball,” Bluder said. “But I see it as more of a team award. They’re the ones who make the plays.”

It’s easy to surmise that Bluder helps instill these values into her players, because Gustafson acts the same way. A hunger to win is clear — you can’t win 29 games in a single season without a desire for more. But Bluder realizes that the majority of her players will not go on to playing careers, so development stretches far beyond the hardwood.