Hawkeye men's gymnastics was disappointed after the first day of action at the Big Ten Championships but rallied on Day 2 to gain reasonable success. 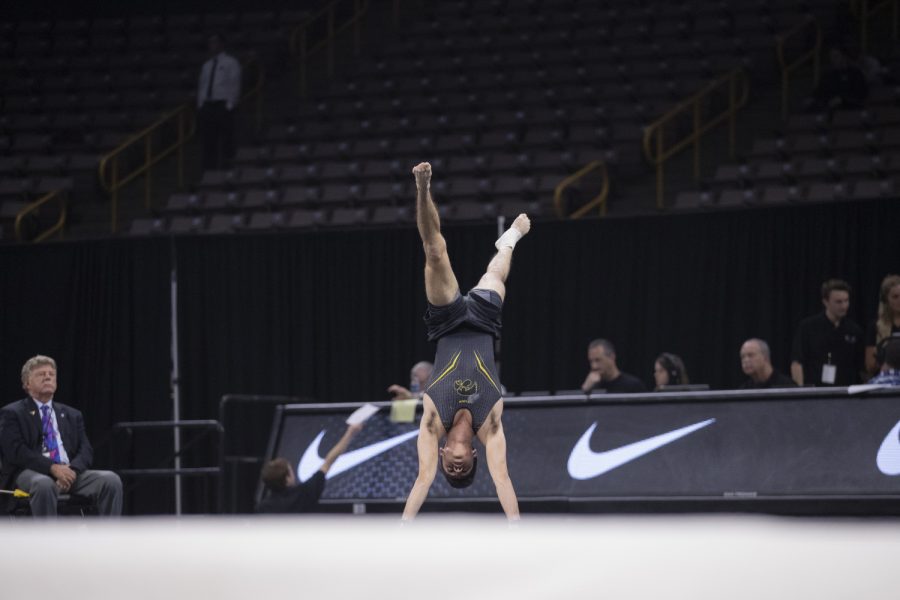 As yesterday’s action at the Big Ten Championships came to a close, only three Hawkeye gymnasts – Jake Brodarzon, Nick Merryman, and Andrew Herrador – had secured spots in individual events.

But earlier today, Rogelio Vazquez and Stewart Brown heard news that they would also get a chance to fight for a place on the podium after other athletes had scratched, moving them up in the rankings.

Yesterday, Brown earned a score of 14.350 on the vault and tied for the 11th-best score in this event of the day. But Brown stepped up today, increasing his score by quite a bit to 14.650.

The Hawkeye was the first to vault, so he had to wait for the nine other athletes to compete to see how his score would stand.

“[It was] gut-wrenching,” Brown said. “Every time someone did something I was trying to judge it on my head and every time somebody went I stayed up top until the last guys went. They’re really good – I knew they were really powerful, really powerful vaulters. I kind of expected them to kind of topple me, but I was able to last. It was hard, it was hard waiting.”

Only two athletes that followed Brown scored better, and Brown improved his 11th-place score to a podium finish.

“I’m a little bit speechless, honestly,” Brown said. “I wasn’t even supposed to make it into finals and then I got the text from JD this afternoon that I was vaulting because someone scratched and I just knew I needed to capitalize on it.”

“I think the pressure, definitely the pressure, and I think I just felt really good today,” Brown said. “I did everything I needed to do to prepare and just attacked it.”

Herrador also found himself a spot on the podium, with a No. 2 finish on the high bar. The Hawkeye was given a score of 14.000. This score was .175 behind the top finisher, Illinois’ Hamish Carter.

Vazquez also competed on the high bar after a scratch but didn’t do quite as well as yesterday and finished 10th. Merryman also scored lower than he did yesterday on the parallel bars, scoring 13.600 today. He tied for sixth.

Brodarzon set the bar high yesterday with his career high score of 14.550. Although he wasn’t able to top that score, he still finished No. 4 with a score of 14.300.

“The individual performances were great, we didn’t miss a routine so that was awesome,” Brodarzon. “We had two awesome finishers on the podium. Andrew, that was such a good routine. I really haven’t seen him do better. And Stewart, I mean, he was an alternate and put in last minute, like that’s so awesome, and as a freshman.”

After being awarded their bronze and silver medals, Brown and Herrador were named to the second team All-Big Ten squad.

As the 2019 Big Ten Championships come to a close, the Hawkeyes will begin to prepare for NCAAs which will take place on April 19-20 in Champaign, Illinois.