Hawkeye senior Chris Whelan is usually one of the most consistent bats in Iowa's lineup. After going through a small slump, he's getting back to his usual place. 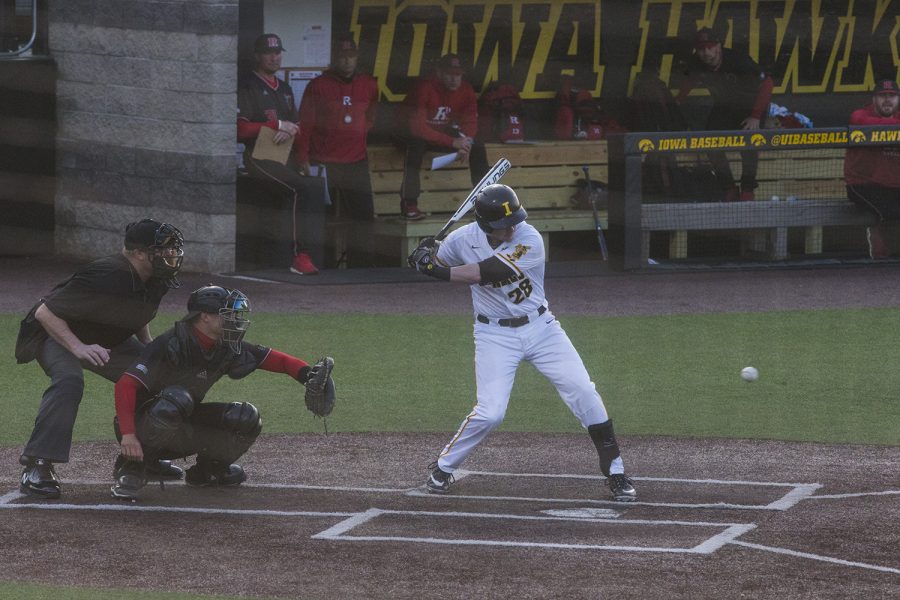 Iowa's Chris Whelen watches the ball in the game against Rutgers at Duane Banks Field on Friday, April 5, 2019. The Hawkeyes defeated the Rutgers Scarlett Knights, 6-1.

There was a point this season where Chris Whelan couldn’t be found at the top of Iowa baseball’s lineup.

He wasn’t at the bottom of it, but he certainly wasn’t leading off. While he’s back in the No. 1 slot now and making it count, there was a stretch where Whelan couldn’t buy a hit.

From March 2-26, with 11 games scattered in there, Whelan only amassed 3 hits with no multi-hit games. In that same stretch, he saw his average drop from .381 to .200, barely staying at the Mendoza Line.

But to Whelan, it didn’t feel like he was in a slump.

“To be honest, I don’t even really think I was in a funk,” he said. “I mean, my average wasn’t there, but I was still getting on base and having good at bats.”

While Whelan couldn’t get hits to fall in that stretch, he still found ways to get on base. In the 11-game span, he racked up 7 walks and got hit by a pitch three times.

“That was kind of my main thing, I guess, getting out of it and seeing those hits fall, was just keeping a steady head and knowing I’m putting good at bats together,” Whelan said. “Eventually they’re going to fall.”

Whether Whelan was in a slump or not, either way, he’s out of it now. The senior has gone 5-for-9 in his last three games with a home run, 4 RBIs, and 5 runs scored.

In Iowa’s 6-1 series-opening win over Rutgers on Friday, Whelan finished 2-for-3 at the plate with 2 runs scored and a walk.

His recent performances show how dominant of a team the Hawkeyes can be when his bat heats up. If Iowa wants to keep its four-game Big Ten winning streak rolling, Whelan will have to keep his bat heating up.

“We need Chris to hit,” Iowa head coach Rick Heller said. “Even when he wasn’t hitting, he’s still finding ways to get on base. We just need him to be able to hit a couple a doubles, a home run now and again, and continue what he does as far as getting on base.”

Iowa’s win over the Scarlet Knights on Friday proved to be a pitcher’s battle for most of the game; both teams were held scoreless until Iowa broke through with a 4-run sixth inning.

Hawkeye starter Cole McDonald, who struck out eight in 6.1 scoreless innings on Friday, acknowledged the help that comes from a potent offense. This time around, Whelan was certainly a part of that.

“It definitely feels good,” McDonald said. “Just want to get the first two runs, you have a little bit of a cushion. It takes the pressure off; you don’t have to be absolutely perfect. Once I got a few runs, I just [wanted] to go out there and compete as hard as I possibly could to get the ‘W.’”