Iowa track’s Collin Hofacker may not have been able to jump over hurdles, but he could certainly overcome them. 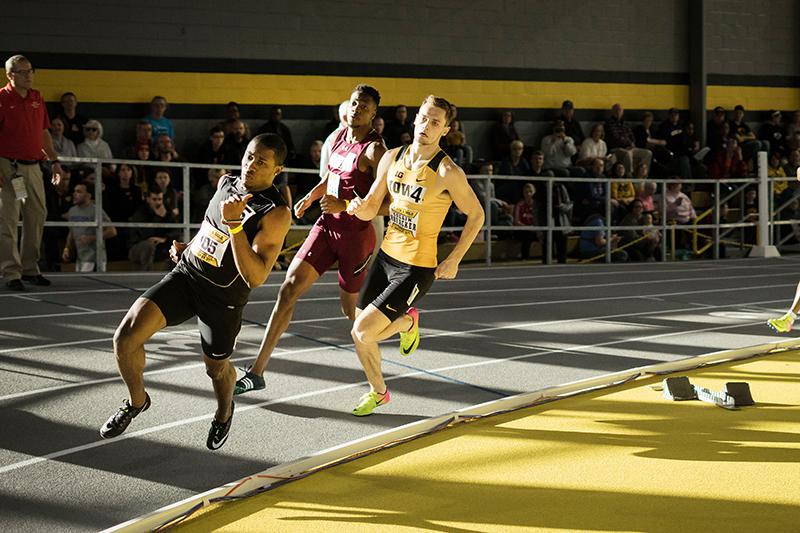 Iowa's Collin Hofacker and other racers round a corner during the last heat of the 400 meter dash at the Black and Gold Premier on Jan. 27, 2018. Collin placed third with a time of 47.94.

To be the best in track and field, you have to go up against the best. That’s what Iowa had in mind, at least, when competing at the Florida Relays March 28-30.

Hosted by the No. 3 Gators, the Florida Relays were going to be a tough task. The men’s 1,600-meter relay, however, excelled on the big stage. Iowa won the race, sneaking by Florida to continue to make a name for the program.

“It was a great race,” Mar’Yea Harris said. “Wayne [Lawrence] got out to an early lead, and then Antonio [Woodard] and Collin [Hofacker] were able to maintain that. From there I was able to do my part and bring it home.”

After struggling to overcome Florida in the event the past couple years, Hofacker sees the win as a big step for the relay.

“It was great for our confidence moving forward,” he said. “We’ve been there the last couple of years and have finished second behind Florida every time, so finally being on top feels pretty nice. It gives us good momentum.”

Hofacker has had his name in the headlines for Iowa track throughout his career, but his story could have been very different.

He was a multisport athlete in high school and wasn’t always certain that track was going to be the area he focused on.

RELATED: Iowa track and field senior doubles as an intern at Google

Despite success across the board athletically, Hofacker decided he wanted to continue his career on the track.

“Coming out of high school, I sat down with my parents to make a decision,” Hofacker said. “We thought I should pick which sport I was most passionate about — football, basketball, or track — and it ended up being track, so we looked for the best landing spot, and the University of Iowa ended up being that place.”

Once Hofacker got to Iowa, he redshirted his freshman season. That experience, he said, was one of the most difficult of his life.

“It was tough,” he said. “Going back to the dorms at night on Thursdays, Fridays, and Saturdays, and it would just be me. The rest of the team is out traveling across the country, and I’m just sitting in my dorm room. I was just watching and waiting, hoping my moment would come, and here I am today.”

That moment would not come without more, fittingly, hurdles.

At the beginning of his Hawkeye career, Hofacker was going to compete as a decathlete to take advantage of all the skills that lead him to be a successful multisport athlete in high school.

Hofacker discovered very quickly that hurdling was going to be a problem for him.

“Coming out of high school I could sprint, but I couldn’t hurdle very well,” he said. “It was a struggle. My trying to go over a hurdle was bad — you can just ask Coach [Joey] Woody. My hips would not let me go over. I could get over them at the high-school level, but once I got to college, it wasn’t pretty.”

“[Hofacker] is right, it wasn’t pretty,” he said. “Luckily, we found him the right events, and obviously, he has really flourished with those.”

After his redshirt season, Hofacker has picked up an All-American honor after every one of his seasons as a sprinter.

His next opportunity to compete will be at the Sun Angel Classic in Tempe, Arizona, today and Saturday. Fast times should be expected, especially without hurdles in the way.