Both teams take on impressive competition as the postseason arrives. 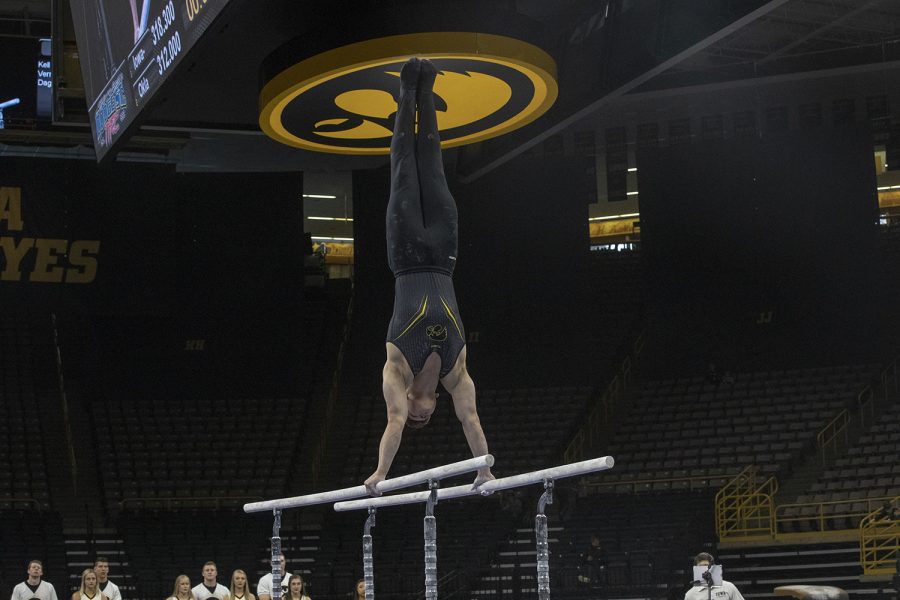 Stewart Brown competes on parallel bars on February 9, 2019 at Carver Hawkeye Arena vs. Oklahoma University. The Oklahoma Sooners won the meet with a total score of 405.150 over the Hawkeyes scoring 397.750.

The women’s gymnastics team qualified for the NCAA Regional meet in Corvallis, Oregon, and the men will take on the Big Ten Championships at Carver-Hawkeye, as they hope for big energy in the postseason.

The men’s team most recently took a piece of the Big Ten Championship when it was awarded the regular-season championship after its season-closing meet against Minnesota and Penn State on March 23.

“I think winning the regular-season Big Ten title gave us a lot of confidence,” freshman Stewart Brown said in a release. “Going into this weekend, I think we know that we have prepared to go hit our sets, and the outcome will be what we want it to be. I am really excited for the energy that will be at Carver. I think everything is laid out in the right position for the team and me to do well.”

After an impressive campaign so far, competing at home should mean more advantages for the Hawkeyes.

“We are going to kick butt,” head coach JD Reive said in a release. “Bring the love and the energy for the guys, because they have earned the right to be out there competing for this title.”

The regular-season title wasn’t enough for the Hawkeyes, and they’re going to try to beat intense competition in Carver-Hawkeye. From grown seniors to freshmen taking on their first Big Ten tourney competition, the team will be ready for whatever is thrown its way.

The top 36 teams in regional qualifying scores advance to the tournament. Iowa is placed at No. 32 in the rankings with a score of 195.705. Now, the GymHawks will face Florida, Oregon State, and Stanford in the second session today.

“Arizona was a classy team and it was difficult for us to get ahead of them,” Iowa head coach Larissa Libby said in a release. “To be honest, in the end, we are just happy we survived the day and moved on. Our girls really responded well [Thursday] and we’re excited for [today].”

Libby has taken Iowa to 15 NCAA regional appearances in a row as the head coach, including 12 team appearances and three individual. The team has appeared at regionals 19-years straight with Libby along for the adventure.

The women’s team competed in Corvallis earlier this season. It placed second in a quad meet (195.425). This time, however, the GymHawks seek to make bigger strides.

“We are really excited to go back to Corvallis,” gymnast Jax Kranitz said in a release. “It’s nice to go back to somewhere where you’ve already competed. We already know what it’s like, and it gives us an edge.”

Individually, four athletes qualified as event specialists for the tournament. Chow and Kranitz qualified on uneven bars, Clair Kaji qualified on beam and floor, and Lauren Guerin earned a spot on floor.