After a midweek loss, Iowa looks to bounce back against Rutgers. 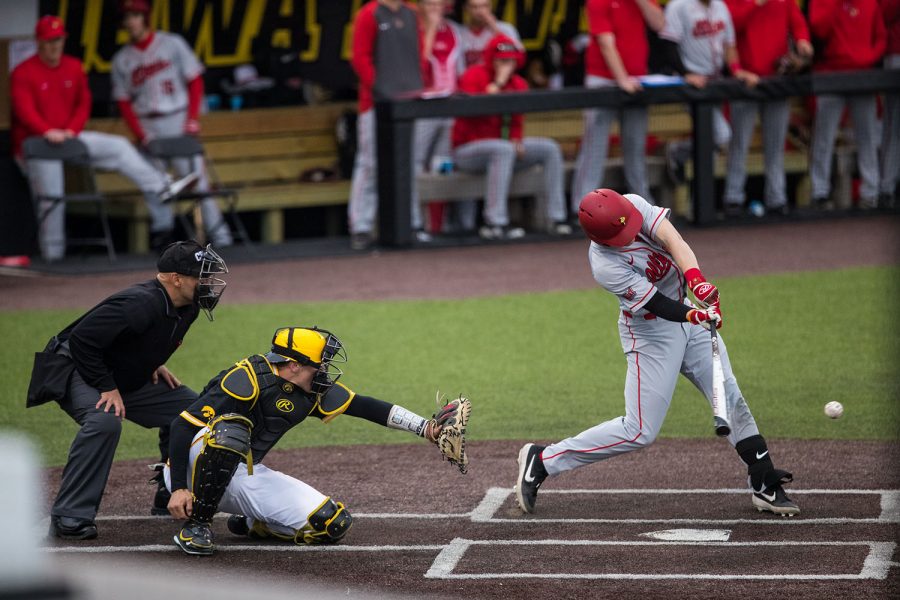 Not many saw it coming, but on Wednesday, Illinois State took down Iowa, 11-6, at Banks Field.

Offensively, the Hawkeyes struggled to string together runs; up until a 3-run homer from Chris Whelan in the bottom of the ninth, Iowa trailed by 8. Defensively, the short-handed Hawkeye pitching crew gave up 16 hits as well.

“Every game matters, and that’s a game we won’t get back,” catcher Austin Martin said.

Iowa only had Thursday to flush the loss; today, Rutgers comes to Banks Field for a three-game weekend series — a series in which the Hawkeyes have a chance to jump over the .500 mark in conference play.

But to do that, the Hawkeyes need to be mentally tougher, coach Rick Heller said after the loss to Illinois State.

“It doesn’t mean that everything is falling apart or caving in, but we have to learn from that … and wipe it away,” he said.

Rutgers, though, provides Iowa with a chance to bounce back and slide up in the Big Ten standings.

The Scarlet Knights own an 8-17 record and have won just one of their three conference games — a 3-2 win in extras against Ohio State on Sunday.

And Rutgers brings a solid opportunity for offense; the Scarlet Knights’ three starting pitchers for this weekend — Harry Rutkowski, Tommy Genuario, and Tevin Murray — have a 1-6 record and have given up 39 runs in 96.2 innings.

Iowa will turn to Martin, who had himself a day against the Redbirds — the junior from Altoona went 4-for-5 with 2 RBIs. This season, he’s hitting .370 with 16 RBIs — both second on the team.

“I’ve just been sticking to my approach and trusting my training that I’ve done all offseason and kind of staying within, stepping in the box relaxed, and confident, and believing in what I’m doing,” he said.

This is Martin’s first season at Iowa, having spent the previous two with Southeastern Community College, where he hit .309 as a sophomore and .304 as a freshman.

“[The biggest adjustment] is your level of concentration on every pitch,” he said. “Everyone out here is good, and that’s why they’re playing Division 1 baseball. You have to be locked in and concentrated on every pitch, and if you don’t do that, you’ll definitely get exposed.”

Martin, along with the rest of the Hawkeye, will attempt to keep themselves out of any sort of losing streak today at 6:05 p.m. Iowa and Rutgers clash twice more — at 2:05 p.m. Saturday and on April 7 at 12:05 p.m.

“We have to stay locked in for every pitch,” Martin said. “I think we’ve got to stick with our plan. Just take momentum that we had from the weekend and be able to roll that into [this weekend].”