Hawkeye softball in for tough test against Badgers

After a few rough showings, Iowa softball gets set for a tough matchup in Wisconsin. 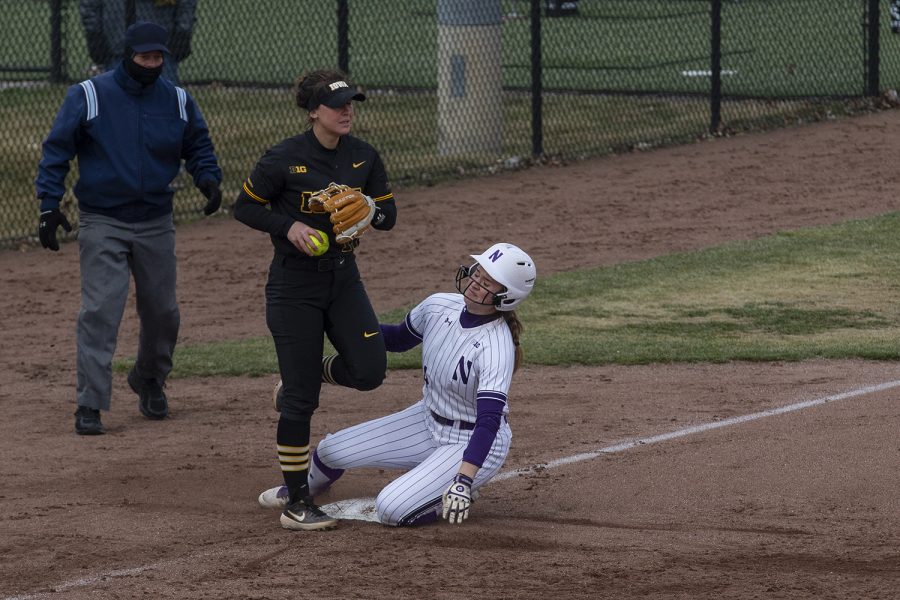 Pitcher/utility Mallory Kilian gets Maeve Nelson out on third during softball against Northwestern on Bob Pearl Field on March 30, 2019. The Wildcats defeated the Hawkeyes 6-2 after the 7th inning.(Katie Goodale/The Daily Iowan)

It has been a long week for Iowa softball. Its game against Northern Iowa, set for Wednesday, was postponed, giving more time for its losing streak to loom over the team.

Now that the weekend is here, Iowa will get a chance to get back to winning in Wisconsin when it takes on the Badgers in a three-game set.

With the long time off, rust may be an issue for the Hawkeyes, but if they hope to be successful, a quick start may be necessary.

Scoring first has been a deciding factor in whether the team wins games. The Hawkeyes have a 15-15 record; Iowa scored first in 14 out of those 15 wins and failed to strike first in all but one of its losses.

Additionally, Iowa is 10-1 when scoring in the first inning and is undefeated when leading after the third — an inning in which it has scored a team-best 18 runs.

Junior DoniRae Mayhew has led the way for Iowa, batting .310 with 3 homers and 16 RBIs, which pace the team. Senior Mallory Kilian has also made significant contributions. She is second on the team with a .289 average and has been stellar in the field, boasting a .957 fielding percentage after returning to third base at the start of the season.

Part of the benefit the Hawkeyes gain from scoring early is the pressure it takes off the pitchers.

In games in which Iowa has scored first, Hawkeye pitchers have given up more than 3 runs just twice, and never more than 5.

Much of Iowa’s success on the mound has come courtesy of ace Allison Doocy.

She picked up her 12th win of the season in Iowa’s last victory — a 2-1 victory over Purdue on March 23 — and has thrown a team-high 12 complete games, averaging 7.5 strikeouts in those performances.

With 131.2 innings pitched (second in the Big Ten), she has proven herself to be a workhorse, also placing fourth in the conference with 128 strikeouts.

This weekend will be a tough test for both sides of the ball for the Hawkeyes. They go up against a Wisconsin team that boasts a 27-5 record (4-2 Big Ten) and includes a five-game winning streak over the past couple weeks.

It has been mostly the offense for the Badgers over that five-game stretch — they have averaged 9 runs a game.

The Badgers haven’t been all too shabby in the circle, either, particularly Haley Hestekin. She’s 12-3 with a sizzling 1.65 ERA in 84.2 innings pitched.