Neal: Transparency in tweeting? No thanks.

Trump's communication strategy may easily connect him with the world but that ease comes with a price. 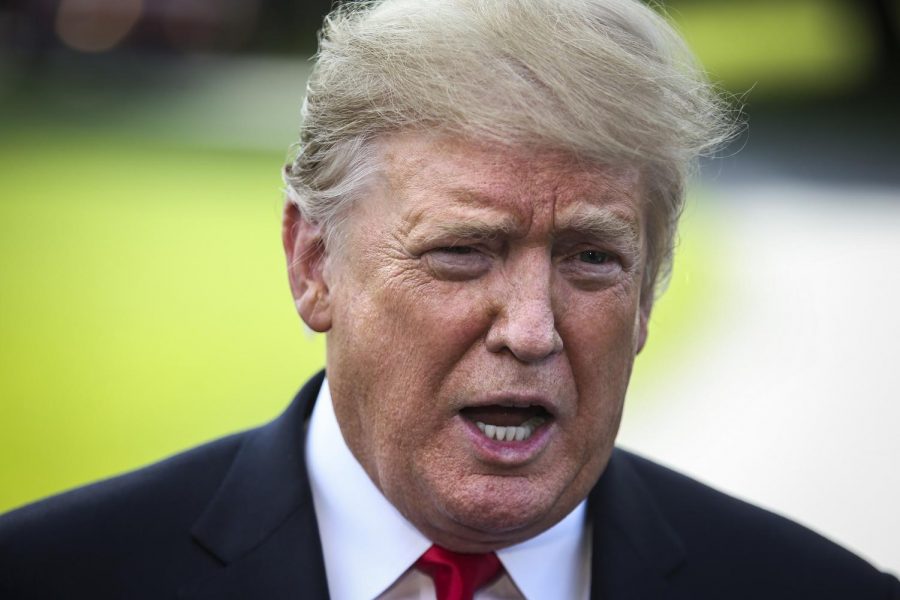 President Donald Trump talks to reporters on the South Lawn before boarding Marine One at the White House in Washington, D.C., on Tuesday, Oct. 9, 2018. (Oliver Contreras/Sipa USA/TNS)

On March 28, a tweet by President Trump resurfaced that backed the anti-vaxx movement by stating, “Healthy young child goes to doctor, gets pumped with massive shot of many vaccines, doesn’t feel good and changes — AUTISM. Many such cases.”

The tweeting habits of the unfiltered and reactionary Trump are all well-too-known phenomena with which everyone is familiar — even if being engaged with social networking is something you don’t take part in. Trump using Twitter as his preferred platform and going as far as denying to use the @POTUS handle, given to whoever is elected president, made for a statement of advocacy toward his loyalty of his personal Twitter account and followers.

Many politicians have exploited technology and social media to promote their personal brand and candidacies. Nonetheless, their approach and demeanor behind these accounts come across as sterile, awkward, and nauseatingly commercialized. With politicians taking on meme culture and attempting to be relatable, it makes for an ungenuine interaction and a lack of intimacy.

Hillary Clinton hackneyed corny millennial propaganda that reeked with desperation for approval from a younger audience. By leaning into meme culture with the “Chillary Clinton” meme and being quoted as saying, “I don’t know who created Pokémon Go, but I’m trying to figure out how we get them to do Pokémon Go to the polls.”

Clinton demonstrated exasperatingly annoying attempts of being relatable. On the other hand, Trump’s social-media presence slightly dismantles the hierarchal complex between him and everyone else in a way that is dramatically true to himself.

There is some amount of value when it comes to the ridiculous amount of transparency that Trump grants us. This transparency is one of the reasons that many voted for Trump — they were ready for someone who was unlike the other candidates and honest. In the words of many, they liked that they knew what they were “getting themselves into.”

Personally, I am unable to resonate with Trump’s policies and for me, anyone is better than an openly anti-LGBTQ who attempted to ban transgender folks from the military and strove to outlaw an entire religion from the country with the travel ban. Therefore, even though there lies value in transparency, on the contrary, there lies absolutely no value when it comes to Trump’s opinion.

Again, this idea of the president having a personal connection with the ease of convenience is not a recent development because of Twitter or social media. During World War II, Franklin Roosevelt had a series of 30 radio addresses to communicate with America through the difficult time it was facing. This sense of direct communication, even though it was a one-way track, provided a sense of intimacy and nurtured the nation, abetting it with coping during the detrimental times.

However, unification is not what Trump’s tweets are encouraging but rather, the exact opposite. With rhetoric that bars people of a specific religion, prevents transgender folks from joining the military, and backs anti-vaccinations, a movement that puts others in danger, it is obvious that division is the intention. Although Trump’s strategy of communication serves for a personal connection between him and the outer world, it accommodates to his specific audience and deters everyone that his tweets threaten, progressing nothing but further division.