After a midweek win on Tuesday, Iowa baseball fell flat on Wednesday. 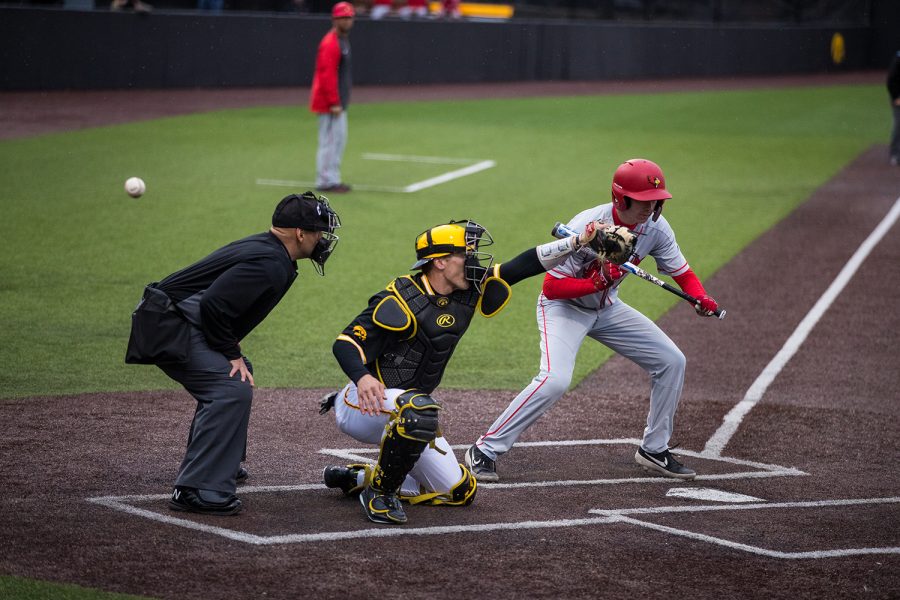 Racking up almost as many errors as runs will not put a baseball team on the fast track to victory, and Iowa learned that on Wednesday.

The Hawkeyes committed 4 errors in an 11-6 loss to Illinois State at Banks Field in their second midweek game in as many days.

Those crooked numbers were ubiquitous in the box score for Illinois State. The Redbirds scored 2 runs in both the second and third innings before plating 5 in the ninth in what was a dreadful inning for Iowa that included 2 errors.

This week served as the Hawkeyes’ first double midweek test of the year. Coming off a 3-2 win over Clarke on Tuesday, Iowa looked primed to extend its five-game winning streak. The Redbird bats had different plans.

“Your midweek game is kind of the test,” said catcher Austin Martin, who was a bright spot in the lineup, going 4-for-5. “We came off a game [Tuesday], and everybody’s got to be ready to play if you want to win those games, and I think tonight we came out flat.

While the loss wasn’t pretty, one thing that pleased Heller was the return of Chris Whelan’s prowess at the plate.

Whelan entered the game hitting .219, but he bounced back on Wednesday. The senior from Naperville, Illinois, went 2-for-4 with a 3-run homer in the ninth and 3 runs scored.

Whelan found himself back at the leadoff spot where he has spent time in the past. Given Mitchell Boe’s solid start to the season in the No. 1 slot, Heller said he was hesitant to switch things up, but the move paid off.

“That is good to see because we really need Chris to step up and hit the way he’s capable,” Heller said. “We all knew he would. It’s just baseball, and unfortunately, sometimes you’re not hot.”

Now, the Hawkeyes are looking to move on from their miscues against the Redbirds. While its overall winning streak may be over, Iowa is still riding a three-game victory streak in the Big Ten.

In last weekend’s series sweep over then-No. 25 Illinois, the Hawkeyes played at a level they wanted to maintain all season. After Wednesday’s loss, it’s a matter of getting back to that level.

“I think our team just looked like we were playing tense [Wednesday],” pitcher Trenton Wallace said. “I think looking back on the [Illinois] weekend, we just had fun. We had a great week of practice, we had fun at practice, and then that rolled into the weekend.”