Iowa softball hopes to get better appearances both in the circle and at the plate tonight in Cedar Falls. 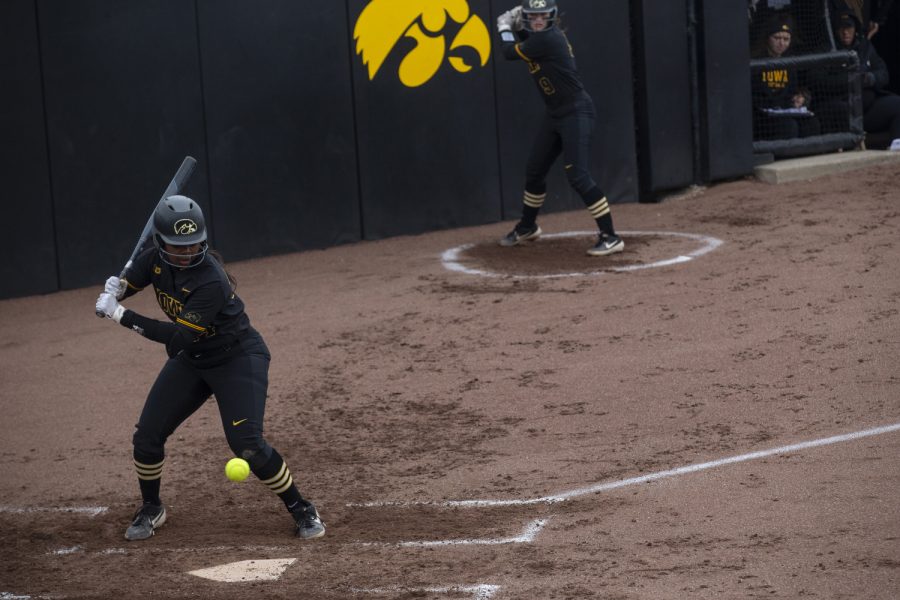 Infielder/pitcher Donirae Mayhew up to bat during softball against Northwestern on Bob Pearl Field on March 30, 2019. The Wildcats defeated the Hawkeyes 6-2 after the 7th inning.

In a way, the team might be glad to take a break from play on its home turf. Iowa struggled at Pearl Field, giving up 27 runs while only scoring 3 through four games this season.

The pitchers have struggled in late games, all at Pearl. The staff gave up 17 runs to Northwestern in last weekend’s series. In the home-opener on March 27, Erin Riding gave up a grand slam early to Western Illinois, which went on to score 10 runs.

Along with spotty pitching, sketchy fielding has made some appearances. In the matchup with Northwestern on March 29, the Wildcats scored 5 runs, but only 2 of them were earned — Iowa committed 3 errors. The game against Western Illinois on March 27 saw somewhat similar trouble; although Iowa didn’t commit any errors, there were missed opportunities on fly balls. Iowa head coach Renee Gillispie said pitching and fielding are interconnected, and  the team needs to clean them up.

“Pitching starts with the pitchers, and when our pitchers aren’t on, then our defense falls apart,” she said after the team’s loss to Western Illinois.

The bats have been quiet in recent weeks, but they certainly have the ability to light up. DoniRae Mayhew was held hitless in the last series against Northwestern, but she leads the team in home runs and ranks second in batting average. Likewise, Mallory Kilian is tied with Mayhew for the most hits but only nabbed one in the series against the Wildcats. Getting consistent hitting and remaining focused is central to helping out the pitching and defense.

“We have to worry about focusing on playing our game and getting sharper,” Gillispie said after only scoring 1 run against Western Illinois.

Iowa hopes to get its offense back in full motion against Northern Iowa. The players are confident in their ability to win on the road, it’s just a matter of getting runners aboard and converting opportunities.

Early in the season, Gillispie made sure the players had experience on a variety of playing surfaces and outside conditions. She said this has allowed the team to be a gritty squad on the road.

“We’re road warriors,” Gillispie said. “We put them in [tough] situations early on … I think that helped them get accustomed to the travel.”

In the midst of a five-game losing slide, the team hopes to use its prowess in Cedar Falls. The Panthers are 15-13 but have a solid 5-2 home record. Infielder Sammey Bunch is on absolute fire at the plate, sporting a .432 average with 10 home runs and a .909 slugging percentage. Iowa pitcher Allison Doocy will have her hands full.

Iowa will remain on the road heading into the weekend, starting a series at Wisconsin on Friday.