Solid starting pitching and some eighth-inning offense boosted the Hawkeyes to win No. 16, their fifth in a row. 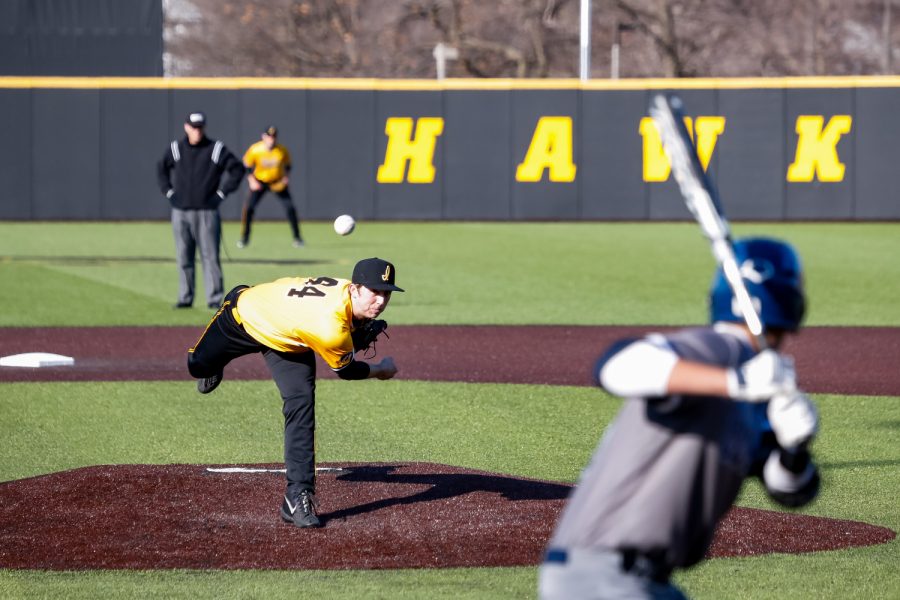 Iowa's Duncan Davitt pitches the ball during a baseball game against Clarke University on Tuesday, Apr. 2, 2019. The Hawkeyes defeated the Pride 3-2.

Thanks to some timely eighth-inning offense, Iowa baseball took down Clarke, 3-2, on Tuesday evening at Banks Field.

The Hawkeyes received a major boost from Duncan Davitt on the mound. The freshman received the starting nod and for five innings, he kept the Pride at bay. The right-hander struck out 6 and allowed just a single hit.

“It was a great start,” head coach Rick Heller said in a release. “He had good stuff today and composed himself well. He did exactly what we needed today and stayed under his pitch count so he’s ready to go this weekend.

This season, Davitt has 20.1 innings under his belt. The Indianola native has a 2.66 ERA and has allowed 14 hits and struck out 22.

Clarke countered Davitt with a sensational outing from pitcher Tsubasa Maruyama. He pitched 6.2 innings and kept Iowa scoreless, striking out 4 and allowing 6 hits.

“We didn’t string any [hits] together and not much for extra bases, which makes it hard to score when you do it that way,” Heller said in a release. “Tip your hat to Murayama. He went almost seven innings against us and didn’t give up a run. [It was] a pitching clinic. He did a nice job of changing speeds, which kept us off balance.”

Thanks to Maruyama’s efforts, the Hawkeyes stayed stuck at 2 runs for most of the game.

That initial pair of runs came in the bottom of the first. Iowa scored after Trenton Wallace grounded out to Clarke’s shortstop, plating Mitchell Boe. Then Ben Norman singled to right, plating Austin Martin.

But then, scoring became hard to come by. Iowa managed 10 hits throughout the contest — six more than Clarke — but struggled to string together runs.

However, while the Hawkeyes had issues offensively, the Pride roared back in the seventh and eighth innings.

In the seventh, John Collins scored after Andrew Lein tripled into right center field. Then, in the top of the eighth with the bases empty, Jamal Howard sent a pitch over the right center wall, tying the game.

Offensively, the Hawkeye answer came in the bottom of the eighth.

A sac fly by Chris Whelan’s scored Matthew Sosa, giving Iowa a 3-2 lead with two on. Clarke tallied the final two outs to end the inning but couldn’t get a runner on base in the ninth, giving the Hawkeyes their fifth win in a row.

Iowa doesn’t have much time to prepare for its next opponent, Illinois State. The Hawkeyes will host the Redbirds today at 6:05 p.m. at Banks Field.

Illinois State has a 14-13 record on the season, having just snapped a seven-game losing streak with a win over Eastern Illinois on Tuesday.