Future of Iowa women’s basketball continues to be bright

With the Hawkeye women’s basketball season now ended, the program needs to move on from the Megan Gustafson Era. 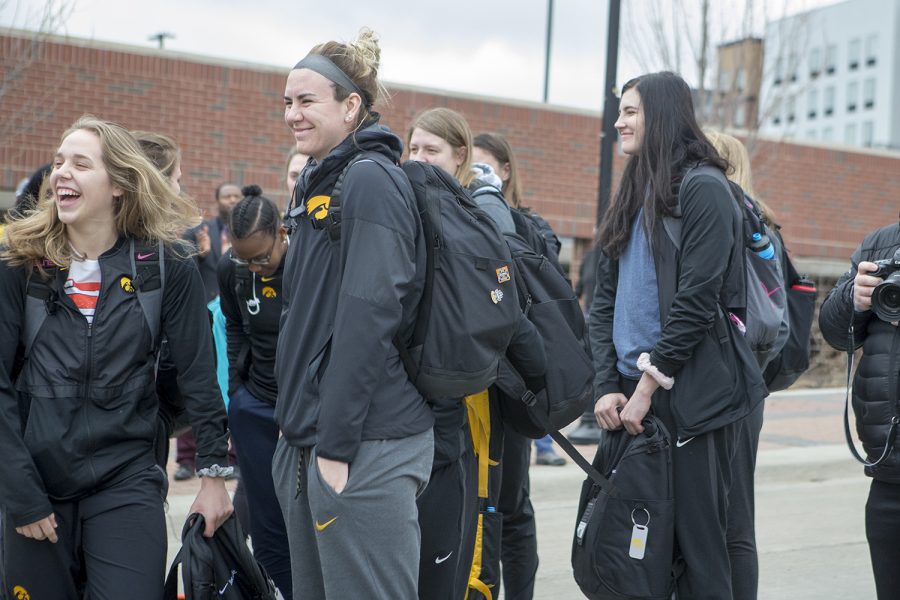 Teammates laugh as others depart the bus at the Transit Center on April 2, 2019.

Hawkeye head coach Lisa Bluder’s most successful season of her career was both deliberate and painstakingly planned.

The Hawkeye women zapped into their longest NCAA Tournament run since 1993 and won their first Big Ten Tournament Championship since 2001. The checklist of accomplishments is long for both the team and ESPN’s national player of the year, Megan Gustafson.

But this season was nothing near a mistake or a surprise for the program. Years of building the culture and recruiting led to a special season, and the same process will ensure a lasting impact on the program.

To the team, the saddest part of Monday’s loss was the conclusion of a special bond. Next year will involve new faces, but the culture Bluder has built will mean strong seasons will continue.

Joining the team next season will be guard McKenna Warnock, the Wisconsin Gatorade Player of the Year. The 6-1 guard is the No. 86 overall player in her recruiting class, according to ESPN. She averaged a double-double for Monona Grove High this season, with 29.7 points and 12.6 rebounds per game.

Following Warnock is Megan Meyer, sister of starting guard Makenzie Meyer. While slightly shorter than her sister, Megan Meyer also has an affinity for shooting 3-pointers.

Both of these new faces have clear draws to counterparts in the Iowa program. Warnock follows the shoes of Gustafson, a fellow Wisconsin Miss Basketball, and Meyer joins her sister in the Black and Gold.

This proves that Bluder has set a permanent culture in Carver-Hawkeye, 19 years into her tenure.

“It all begins with getting talent in,” she said. “You know, I think the culture is there. I think people want to play with the type of women that we have on our team.”

Returners for next season’s squad demonstrated a lot of improvement this season, and it’s easy to think the opportunities to play with this year’s seniors helped quite a bit in development.

RELATED: Gustafson wraps up career with another stellar performance

Kathleen Doyle and Makenzie Meyer are the only returning starters, but others have proven effective off the bench. Doyle has some of the best assist numbers in the conference and has a gamer personality that drives teams forward, and Meyer adds a 3-point stroke that has the ability to take over games. Likely joining the starting unit will be Amanda Ollinger, who was productive as a post player when taking the hardwood this season.

But still, this season comes back to the now-finished seniors of Megan Gustafson, Tania Davis, and Hannah Stewart.

After a win on Senior Day on March 3, Stewart had a few words for her coach.

“She’s taught me so many life lessons about what it means not only to be a good basketball player but a strong woman,” she said. “Not all coaches are like that. She definitely cares about who we are as people. That makes it so fun, and that makes us want to play for her and win for her. My mom was my coach in high school, so when I got to Iowa, it didn’t really feel that much different.”

Gustafson has had many similar words about her coach this season.

It is no mistake that this crop of seniors chose to come to Iowa. Creating a culture surrounded by positive leadership and meaningful role models, Bluder said, are the first steps in establishing a winning culture. People want to play for this coaching staff.

Next season won’t be the same, but new faces just mean new forms of excitement for the program.