Alexia Sánchez, Noel Mills, and Dady Mansaray shared their visions for the UI and their plans to improve campus. 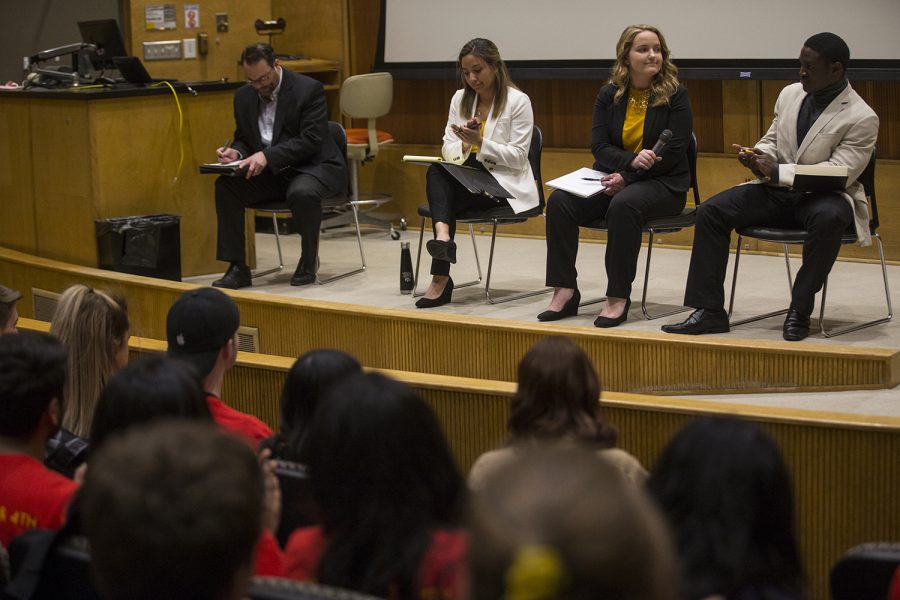 University of Iowa Student Government presidential candidates participated in a debate covering their top initiatives and debated their solutions to campus issues.

The three candidates — Noel Mills with Ignite Iowa, Alexia Sánchez with Inspire UI, and Dady Mansaray of UI Charge Party — debated their qualifications, solutions to issues on campus, and college affordability and appropriations.

Sánchez, who has served as a UISG senator for three years and currently chairs the Student Life Committee, said her top priority is increasing engagement and inclusion on campus, including expanding the Johnson County community ID program and adding a Latinx living-learning community on campus residence halls.

Mills, who has served in UISG for three years as a senator and finance director, said Ignite Iowa looks to create clearer communication between UISG and student organizations by attending student-organization events and expanding the UISG texting service.

Mansaray, a current UISG senator who campaigned for UISG president last year, said his top initiative is increasing the visibility of student government and educating the student body as to its role on campus.

Candidates were asked about their plans to further diversity, equity, and inclusion on campus.

Mills said it’s important to recognize that although she and her running mate identify as white and cisgender, they are committed to promoting equity and inclusion.

“It’s important for us to know that there is room to learn and to grow, and that’s going to be super important in an administration that plans to represent every Hawkeye. If you don’t feel represented by your elected by your elected representatives, then you’re not going to feel like you belong here on campus,” Mills said. “Increasing communication between student government and the student body is going to be key for this administration.”

Both Sánchez and Mansaray spoke about increasing support for Center for Diversity and Enrichment resources. Sánchez also mentioned increasing accessibility in classrooms for students with disabilities.

Candidates were asked a series of questions about controversial issues, including campus free speech, violence on campus, and alcohol harm reduction.

Mansaray emphasized the importance of creating a space to hear all sides of an issue.

“I think that, personally, when those conversations are an issue, we need to create an environment, a space where we are hearing all sides. Sometimes, when we encourage those things, messages can be taken out of context,” Mansaray said.

Mills mentioned the idea of creating signs to warn students when contentious protests or other debates are occurring in public spaces.

Sánchez also spoke to the importance of creating alcohol-free entertainment events as part of the Alcohol Harm Reduction Plan.

The final topic of the debate was affordability and accessibility for UI students. All three candidates advocated for increasing advocacy with state legislators and the state Board of Regents.

Sánchez spoke on her personal experiences with affordability and her plans to increase student accessibility.

“Personally, if it weren’t for my [resident assistant] job, I would struggle a lot more to afford college. A really great idea we have is decreasing the cost of graduation, making sure we are able to subsidize those issues,” Sánchez said. “On a macro-issue, promoting conversations with state legislators, and lastly, making sure we are executing initiatives that the students care about and that they are going to be needing in the future.”