IC City Council undecided on how to deal with deer population

It’s no secret that the deer population is rising out of control in Iowa City, but settling on a program to solve the problem has become more challenging than expected for City Council. 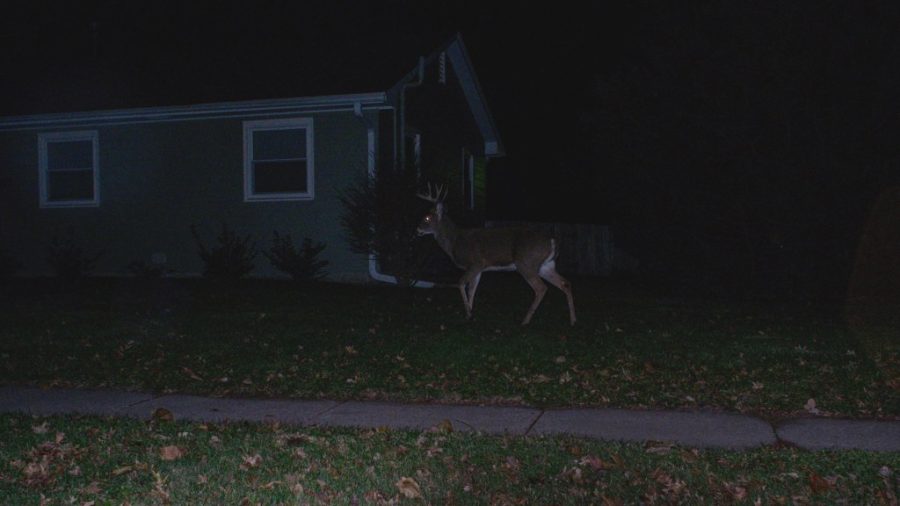 A deer strolls around a yard in Iowa City in Noember 2017.

It’s official — Iowa City’s deer population is soaring. Numbers are around 10,000 in urban areas, according to a count by White Buffalo Inc. Creating a program to fix the problem is a more complicated process than expected, said Capt. Bill Campbell of the Iowa City police.

The City Council will discuss how to manage the growing problem at on April 23.

In a memo from City Manager Geoff Fruin on March 6, he said that although the Natural Resources Commission has not given a formal clarification regarding why the city’s requests were denied, the city staff’s communication with senior Natural Resources Department staff has made the commission’s goals more clear.

“It is our understanding that the [commission] will approve professionally contracted sharpshooting for one year to decrease the number to the commission-approved density level, but then some form of public hunt must be utilized to maintain the numbers for the remainder of the five-year plan,” Fruin said in the memo.

At a meeting on March 12, Fruin proposed going through with this type of deer-management plan. Some city councilors are wary, because the plan would likely require the city to host an urban deer hunt.

In 2018, the City Council directed staff to approach the resources commission to ask for a permit to sharp shoot deer in the city for the first time since 2009, when deer-population numbers were last reported to be at a “reasonable level.” The city staff went to Des Moines and presented a permit request to the commission that was then rejected.

“[The commission] gave some fairly specific requests of us,” Campbell said. “They wanted us to have a forum to seek some public input, and they also really have always been very supportive of bow-hunting, the public-hunt aspect of it.”

RELATED: Public to give input on city’s deer-reduction plan

After seeking input from the community at a public forum on Aug. 14, 2018, the council redirected the staff to go back to the commission with another proposal for sharpshooters in December 2018. The commission denied the request for a second time.

Campbell said the issue between the commission and City Council is one of method. In follow-up conversations the staff had with the DNR, Campbell said, the staff was able to sort out that the commission would potentially be more agreeable to a permit application that would put in place sharpshooting in the first year of a five-year plan.

White Buffalo President Anthony DeNicola said bow hunting would not be enough to decrease the deer population, and he believes that sharpshooting is the only way to reach the population goals.

“Those residual densities are really in the interests of the public that lives within that municipality boundary,” DeNicola said. “The fact that [the state] is going to restrict them to a method that will not meet their objectives, and there are no data to show that archery hunting will be able to reduce deer, there is no way bow hunting will either reduce or maintain densities at that level.”

The council will take up the issue again in its formal meeting on April 23, in which the councilors will seek public input about the city’s next steps.