Hawkeye fans took offense to some of the comments Baylor coach Kim Mulkey made during Sunday’s press conference ahead of Iowa’s Elite Eight matchup against the Bears. 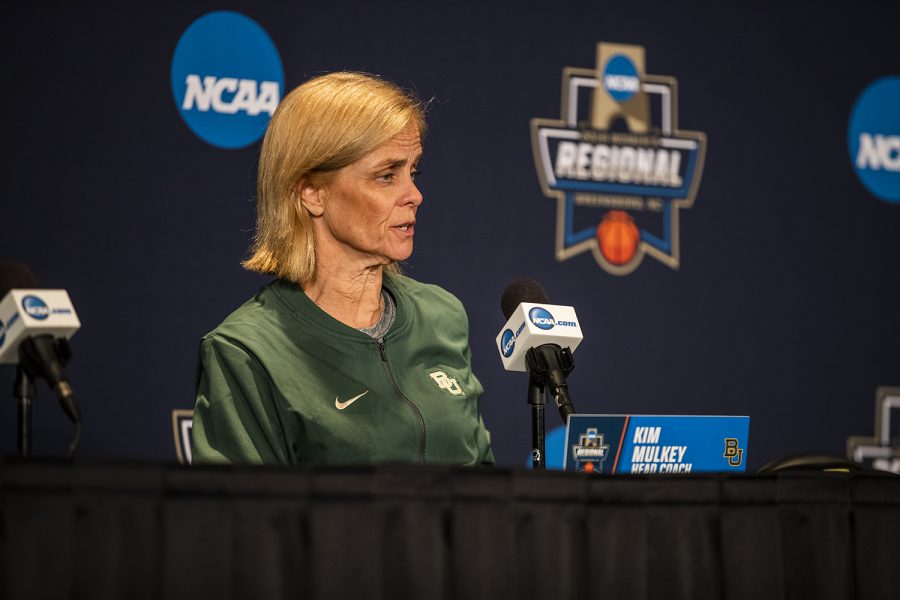 Baylor head coach Kim Mulkey addresses the media during the Baylor press conference at the Greensboro Coliseum on Sunday, March 31, 2019.

The often-grumpy coach seemed more annoyed than usual during Sunday’s press conference which led to some contrite responses, and even some long-winded criticism of some media members’ questions about Baylor’s star player, Kalani Brown.

Baylor coach Kim Mulkey hopes her center, Kalani Brown, doesn’t have nightmares about Iowa’s Megan Gustafson. Brown is going to try staying with the Hawkeye star. The Bears seem annoyed with attention Megan is getting. pic.twitter.com/oXKJAgzkmi

Mulkey’s comments were also taken by some as a slight to Iowa star player Megan Gustafson.

Two other times Mulkey seemed to almost sarcastically remark about ESPN naming Gustafson as its Player of the Year.

Once Mulkey’s comments were spread around the Twittersphere, Iowa fans had some visceral reactions to the two-time national champion’s press conference.

It takes a sick human being to manufacture a beef with a respected national reporter to take a passive-aggressive shot at a player who is maybe the best story in women’s basketball — who represents everything good about humanity and team sports. https://t.co/7kvC46xs24

Irrational Hawkeye also chimed in some with a rational take, taking the opportunity to praise Iowa head coach Lisa Bluder.

Even Iowa State fans took the Hawkeyes’ side.

Kim Mulkey is one on of the three people on this planet that can cause me to cheer for Iowa. Go Gustafson. https://t.co/mnqseXyBvH

There may not be a more hatable team in sports right now than these Baylor Bear women. I hope Iowa (and specifically Megan) beats them to a pulp. https://t.co/C23b0vG8W8

However, no one seemed more livid than the regular Iowa  fans.

Dear Iowa women, please send Kim Mulkey and her resting b*tch face and sarcastic drawl home for the rest of the tournament https://t.co/tFcGJlqhpn

I lost a lot of respect for Kim Mulkey after this. This attitude WILL NOT bring more attention to women’s basketball. Ew. https://t.co/TWKEwl6VZe

If, for some reason, you needed a reason to root against Baylor…. https://t.co/5XBilPXolZ