Iowa head coach Lisa Bluder and the rest of the Hawkeye starters took time in front of the microphone to discuss the challenges Baylor presents. 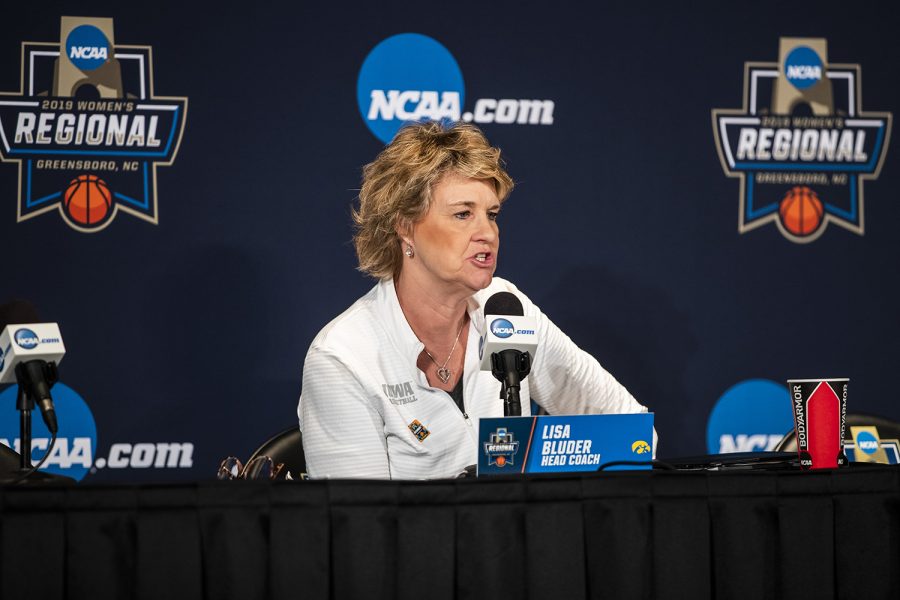 Iowa head coach Lisa Bluder answers a question during the Iowa press conference at the Greensboro Coliseum Complex on Sunday, March 31, 2019. The Hawkeyes will compete against Baylor in the Elite 8 game tomorrow.

Greensboro, North Carolina – Ahead of the Elite Eight, the Hawkeyes took to the podium to discuss their upcoming matchup with No. 1 Baylor and what the Bears bring to the court.

“[Gustafson] hasn’t gone against that many players that are 6’7. I mean, that’s a real challenge, and we know that. I think what allows her to be successful is she does run the floor well. She’s got great footwork. She’s got wonderful hands. Her shot is very, very quick. She’s got some great ball fakes, and up-and-unders, and things like that that she can try to get you off the ground with. She’s got a nice hook shot. Hook shots are really hard to defend because you’re standing away from the defender. I think that she’s found ways to shoot over bigger people because she does it almost all the time – now, not 6’7, but almost all year, she’s the undersized post.”

Guard Tania Davis on who Baylor reminds her of

“For guards, you can compare it to a Maryland or a Rutgers. They are in your [face] defensively, so we’re going to have to be strong with the ball. Like I said, we played Maryland and we played Rutgers, so we feel like we have – we’re pretty much prepared for it.”

“It’s awesome to see our friends and family. We all have lots of friends and family here, but there are some people that we’ve never met that are walking around our hotel and telling us “Go Hawks” and that kind of thing, which shows us how awesome and loyal our fan base is. We’re so thankful for them.”

Gustafson on how she will attempt to counter Baylor’s height

“Obviously, they have a couple inches on us and we just have to be ready for that. They are going to have a really good, physical level, and we have to use our own physical strengths. Especially, we’ve got to focus on our footwork, too, inside, especially if we’re going to use ball fakes, or whatever it is. Footwork is going to be important.”

Makenzie Meyer on having to wait two days to play

“We’re all just really excited to get back out on the court, but it is really beneficial for our bodies to get some time to rest and recover, and we’re just looking forward to the opportunity.”

Bluder on motivating her team