John Delaney has been running for president since 2017. The former Democratic Maryland congressman spoke in Iowa City Sunday on his plans to combat climate change, initiate bipartisan actions and revive rural communities. 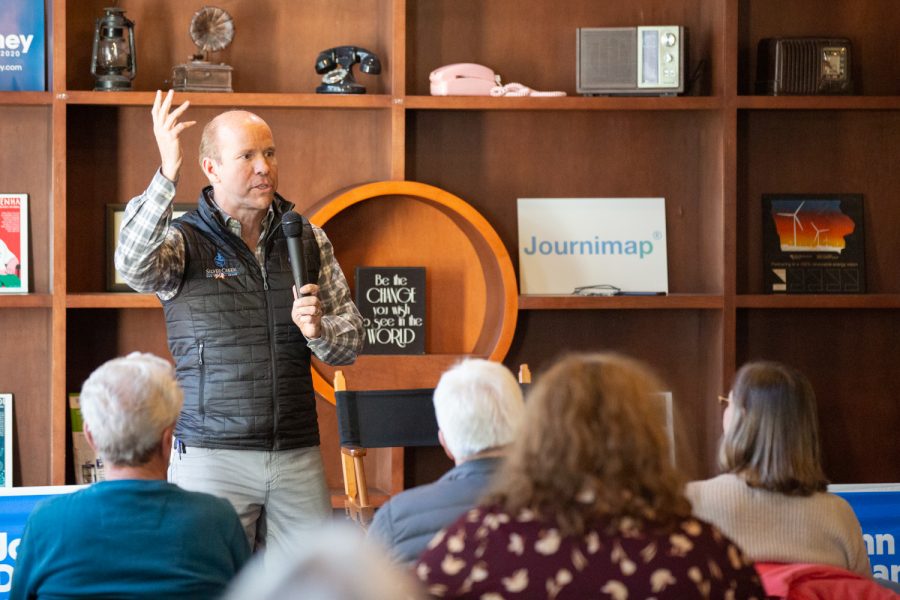 Presidential candidate and former U.S. Rep. John Delaney, D-Md., stopped at MERGE in Iowa City Sunday to connect with voters on his plans for change. Describing himself as a “pragmatist,” Delaney outlined strategies to accomplish his goals, which include fighting climate change, reforming health care, and cooperating through bipartisanship.

Delaney became the first declared Democratic candidate after launching his campaign nearly two years ago in July 2017. He formerly represented Maryland in the House of Representatives from 2013 to 2019 before leaving Congress to focus on his presidential run.

Much of Delaney’s campaign strategy has focused on Iowa. He said he’s visited all of Iowa’s 99 counties since announcing his run.

To keep up with past and future presidential visits to Johnson and Linn Counties, see The Daily Iowan’s interactive candidate tracker.

“I think when you put up a person as the Democratic nominee for president, you should put up someone who you think will win Iowa,” Delaney said to a crowd of about 70 at MERGE. “Because if you put up a person who can win Iowa in the general election, they’re going to win the presidency and that should actually be your standard.”

Delaney said he has spent most of his latest Iowa tour in rural towns to unveil his “Heartland Fair Deal,” which addresses the economic growth, infrastructure, health care, and agriculture in rural communities.

“There is no reason we should be writing off rural America,” he said. “That is just ridiculous.”

To combat climate change, Delaney said he will pass a bipartisan carbon tax bill in his first year as president that he led in Congress. He said the bill is a model to decrease emissions by 90 percent.

He also said he will also increase the Department of Energy budget five times over. The DOE’s budget was $32.5 billion in 2017.

“We have to innovate our way out of [climate change],” Delaney said. “The American way is to put huge resources behind a problem, take the best minds in the country, and have them solve it. We need the government to do a moonshot around basic research with a fivefold increase on funding to solve those problems.”

Delaney said he also wants to redirect the $5 billion of subsidies that go toward the fossil fuel industry per year. He hopes to spend the money on establishing a market for negative emission technology.

“The only way we are going to save the world is through innovation and technology,” he said.

Mary Huneke, 66, said Delaney struck her as similar to a young Joe Biden due to his enthusiasm, energy and and experience. Her priority for a candidate is their climate change policy, she said, although she has not yet committed to caucus for anyone specific.

“I was happy with what he said about climate change even though it does not echo the Green New Deal,” she said. “He has a somewhat different approach and that’s fine. The Green New Deal is not a litmus test.”

Colette Brodersen, 65, said Delaney was well spoken and she approved of his plans for climate change policy. She said she also appreciated that he touched on the concerns associated with  militarization and wars in the U.S. However, she is still deciding on a candidate to support in the caucus.

“I don’t know how with unending wars we can possibly accomplish the other things he’s talking about,” she said.