After a rocky stretch of hitting, Iowa needs a bounce-back effort against Illinois if it wants its first victory in conference play. 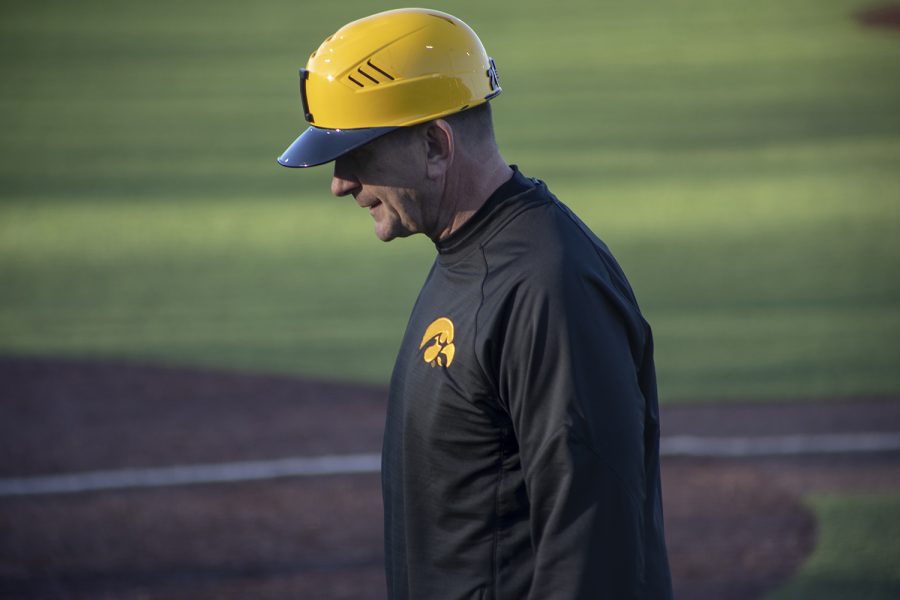 Coach Rick Heller takes the field during the game against Bradley on March 26, 2019 at Duane Banks Field. The Hawks took the victory, 4-2.

Granted, the Hawkeyes have only played three — a weekend series against Indiana — but it’s the first 0-3 sweep to start a season under head coach Rick Heller, and the program’s first since 2008.

However, Iowa has a chance to get its first conference victory of the season when it hosts Illinois at 4 p.m. today in the first of a three-game home series.

The key, however, is getting out of a hitting slump. The Hawkeyes have struggled in the past four games to string together positive at-bats and drive in runs. In the three games against the Hoosiers, they scored only 4 runs on 21 hits.

In Iowa’s win over Bradley, it scored 4 runs (three of which came after a Brave error) and finished with just 7 hits.

“We’ve been struggling for extra-base hits,” Heller said after the victory over Bradley. “We get our share of singles, and we take our walks when guys will give them to us, but we just haven’t been driving the baseball much.”

During the slump, Chris Whelan, Iowa’s senior designated hitter, has struggled as well. He is hitting just .200 and in the last four games combined, he’s gone 1-for-11.

“He wasn’t feeling the best a couple weeks ago — aches and pains, some body stuff from just falling, playing,” Heller said. “He seemed to kind of go into the funk when that happened, and he just really hasn’t come out of it.”

Heller did add, though, that Whelan “looked a lot more like himself” in batting practice prior to the game against Bradley.

Whelan’s ability to bounce back will be a key for Iowa, and so will Connor McCaffery’s full-time commitment to baseball.

McCaffery, now done with the basketball season, said after Bradley that it’s “100 percent” baseball for the rest of the season, and that’s a major plus for the Hawkeyes.

Heller said that while he doesn’t expect McCaffery to jump in and be the team’s savior, he does give the Hawkeyes an added spark offensively.

“He brings us a nice boost and a threat in the middle of the lineup,” Heller said. “We only had two extra-base hits the entire weekend at Indiana, so hopefully, Connor can come in, and drive some gaps for us, and help pick up the offense a little bit.”

McCaffery, ranked by D1Baseball as the seventh-best Big Ten prospect for the upcoming MLB Draft, has played in just five games for the Hawkeyes, but he’s been effective.

McCaffery is hitting .364 and has a .545 slugging percentage — the best mark on the roster.

“I’m just another left-handed bat in the lineup,” he said. “I can hit for power, and I feel like any  time you can add a bat to your lineup, that’s going to be good in the box, it’s good for the team. That’s just what I’m trying to do, come in and instill confidence in my teammates and my coaches so they know they can depend on me when I step in the box.”