On a 42-6 vote, over-the-counter birth control moves closer to the Iowa governor’s desk. 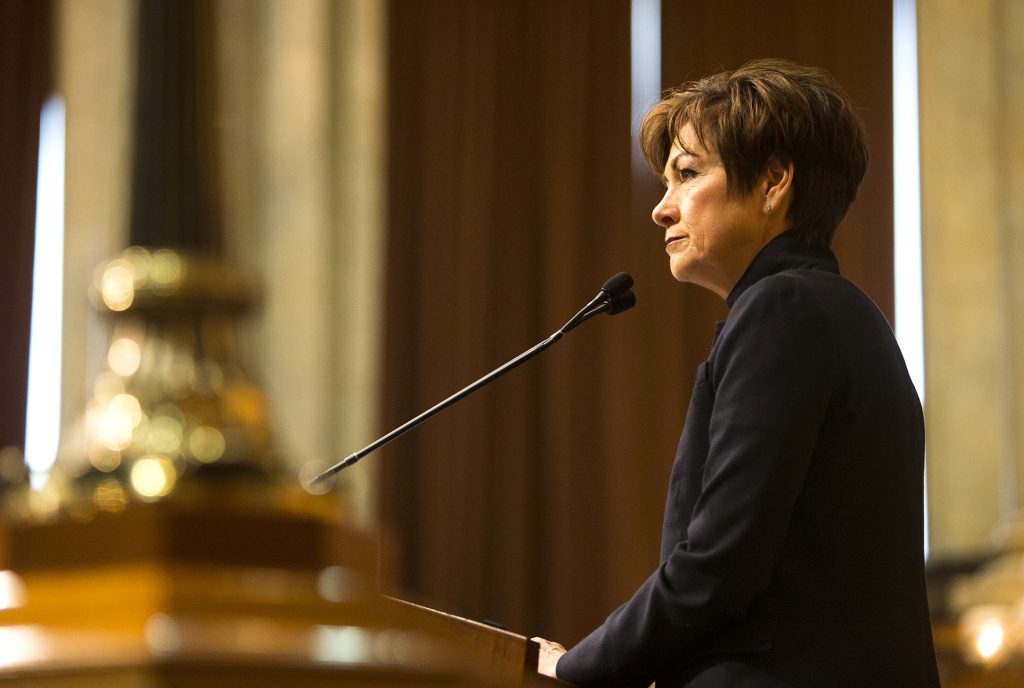 Iowa Gov. Kim Reynolds speaks during her first Condition of the State address in the Iowa State Capitol in Des Moines on January 9, 2018.

Over-the-counter birth-control legislation has made some headway in the state Legislature and has been introduced in the Senate by Sen. Joni Ernst, R-Iowa.

Ernst announced in a news release March 28 that she will introduce legislation to increase access to contraceptives over-the-counter and without a prescription.

“By allowing women to purchase birth control over-the-counter and without the requirement of a prescription, we are giving them more options, with fewer delays and without unnecessary hurdles,” Ernst said. “It’s critical we remove barriers for women in Iowa and across the country to give them the best access to care possible.”

Gov. Kim Reynolds has voiced support for over-the-counter birth control. During an October gubernatorial debate in Sioux City, she said she would work with the Legislature to pass legislation, and she has supported Ernst’s bill.

“What Sen. Ernst has unveiled at the federal level closely aligns with our efforts, and I appreciate her leadership on this issue,” Reynolds said in the release.

Reynolds proposed over-the-counter birth-control legislation in February, and it was passed March 27 by the Iowa Senate on a 42-6 vote. Two senators were absent.

“This is quite a big day for the state of Iowa to do this,” Sen. Liz Mathis, D-Hiawatha, said before the chamber voted on the bill.

The bill, Senate File 513, would allow pharmacists to dispense up to a year’s supply of hormonal birth-control pills, patches, and vaginal rings to patients at least 18 years old. Before they can prescribe the birth-control products, pharmacists would need to complete a standardized training program and continuing education requirements.

“The goal is to provide easier access [and] avoid unintended or unwanted pregnancies,” Sen. Mariannette Miller-Meeks, R-Ottumwa, said while introducing the bill.

Sen. Carrie Koelker, R-Dyersville, said she is excited to see legislation of this nature during her first year as a senator.

“As a mother of a daughter, I think this is another layer of options for women in our state,” she said on the floor. “[SF 513] helps with family planning and unwanted pregnancies.”

Sen. Claire Celsi, D-West Des Moines, had deep reservations about the bill, drawing from her own experience of having had three pulmonary embolisms, which can be a side effect of hormonal birth-control pills.

“There are serious consequences to birth control pills,” Celsi said on the floor. “Removing a women’s whole health out of the equation and the fact that a physician is trained and equipped to help a woman evaluate her entire reproductive health and reproductive history and needs.”

Patients would have their blood pressure checked and would be required to fill out a self-screening risk assessment modeled after ones used in Utah and Oregon. They would also be advised by the pharmacist and instructed to see their primary-care provider, but it is not required. One provision of the bill would prohibit pharmacists from dispensing over-the-counter hormonal birth control for more than two years after the date a product is initially dispensed without the patients attesting they have consulted with their primary-care or health-care provider.

Sen. Thomas Greene, R-Burlington, said he knows today’s pharmacists have gone through extensive training to receive their degree and would be qualified to dispense birth control. He also said it is important for young women to have access to birth control.

“It behooves all of us to do what we can to make sure that young women today have access to proper care,” Greene said on the Senate floor.

Thirteen groups have lobbied in favor of the legislation, including the Governor’s Office and the Iowa Department of Public Health.

The state House will need to pass SF 513 before it can head to Reynolds’ desk to be enacted into law.