President Trump signed an executive order last week to ensure free speech would live on in college campuses. This is crucial in an era when people try to put feelings and political correctness over our constitutional rights. 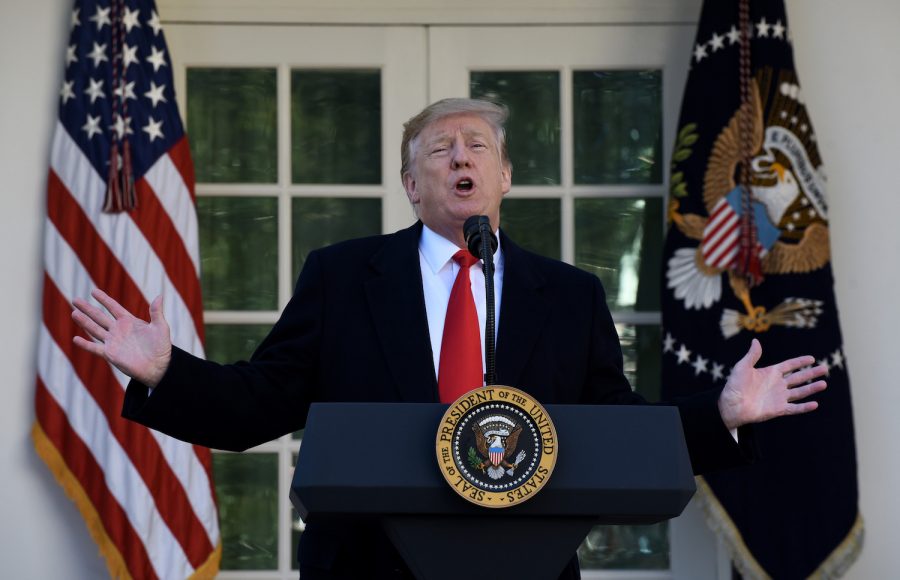 President Donald Trump makes a statement announcing that a deal has been reached to reopen the government through Feb. 15 during an event in the Rose Garden of the White House Jan. 25, 2019 in Washington, D.C.

On March 21, President Trump signed an executive order protecting free speech on college campuses. You probably didn’t hear very much about it because the mainstream media outlets barely gave it any coverage. The order states that to receive research grants from 12 government agencies, universities must prove that they take an active role in defending free speech in line with the First Amendment. That seems fair, doesn’t it? If you don’t follow the Constitution, you won’t get money from the government.

It’s hard to think of who might oppose an order like this. Freedom of speech is one of the most basic principles of our government. Lots of college administrators want free speech on their campuses because they know that it’s not only a freedom laid out for everyone in the Constitution, it is also important for sparking a dialogue and creating the “marketplace of ideas” that institutions strive for.

There are, however, individuals who don’t want free speech on college campuses. I’ve experienced this firsthand. There are leftists on this campus who want to take away free speech and be allowed to police what ideas may be voiced. They want supreme veto power over what we can say and do as university students. The truly horrible part about this is that it is done in the name of “tolerance.” These attempts at censoring “hate speech” translate to silencing ideas that I don’t like.

You see, what most people call hate speech is the exact thing that free speech is designed to protect. We wouldn’t need a First Amendment if all anyone ever said was good things about the country and its policies. Liberals aren’t afraid to scream conspiracies about our president that would get them arrested by other governments when they rally on the Pentacrest steps. (Remember “Conclusion, Collusion”?) But they demand action to be taken when a sign with words that make them feel uncomfortable is on public display. You don’t get to reap the benefits of free speech while also calling for an end to free speech. That’s hypocrisy.

RELATED: Protesters and counter-protesters gather on Pentacrest in wake of Jeff Sessions firing

So, Trump has taken the option to censor free speech away from the hands of college administrators who feel growing pressure from the left to censor ideas that people don’t like. Some people don’t get this, though, and will continue to tweet and email to try to get ideas pushed off the campus in the name of progressivism and tolerance. Money talks, however, so I don’t anticipate the University of Iowa censoring students from either side of the political spectrum anytime soon.

That is something we should all celebrate. If a group that you don’t like expresses views that you don’t agree with, organize another rally to take place the next day. Don’t be afraid of views that people  express. People voice views to be heard. If no one is listening, they’re probably going to stop whatever they’re saying. If someone actually spews horrible ideas on the campus, the students as a whole will express their displeasure. At the end of the day, Hawks want to help Hawks. We don’t help each other by silencing people, we do it by listening.